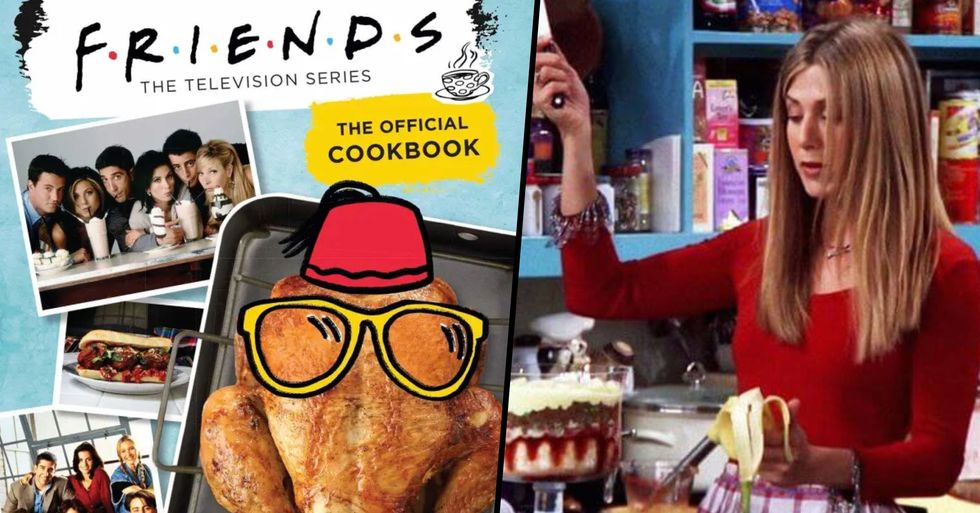 First Official 'Friends' Cookbook Is Being Released and Could We Be Any More Excited?

Calling all Friends fanatics: A new cookbook is set to be released that features over fifty recipes inspired by the show.

Did someone mention Joey's meatball sub?

Keep scrolling to read more about this incredible book, and to find out where you can get your own...

Ross, Rachel, Chandler, Monica, Phoebe, and Joey burst onto our screens in September 1994. Created by David Crane and Marta Kauffman, the comedy follows the friends, who live in the same New York apartment block, as they navigate their mid-twenties.

The show propelled each cast member into superstardom, with the show winning several Emmy's during its ten-season run.

Allegedly, the cast were each on an eye-watering $1 million salary per episode in the later seasons of the show - a history-breaking figure.

Fans were heartbroken to learn that it was over... for good.

Apart from the occasional reunion on talk-shows, fans have had their fair share of disappointments when it comes to waiting for a Friends reunion. A fake trailer for a Friends movie even went viral last year, giving superfans false hope that the sitcom was hitting the box office.

I hate to be the bearer of bad news...

But, at this point, it's pretty clear that a Friends reunion won't be happening any time soon.

But there's something else that could cheer our Friends woes...

And that's a Friends cookbook.

Yep, a cookbook dedicated to the hit TV show is set to be released...

Could we be any more excited?

You can now live out Monica's dream of being a head chef...

In your very own kitchen.

The cookbook will feature over fifty different recipes.

Which have all, at some point, featured in the show.

You can learn how to make your own "moist maker" sandwich...

There will be Joey Tribiani's famous meatball sub...

So you will finally be able to find out just how good it is.

Several delicious recipes from the various Thanksgiving specials will also be available...

My fingers are crossed for Chandler's cranberries.

And you will find Pheobe's grandmother's secret cookie recipe.

Though it does turn out to be the Nestlé Toll House recipe...

But many are wondering one thing.

@primetimercom If it doesn't have a trifle recipe that includes beef and peas, demand a refund.
— Will Hutchings (@Will Hutchings)1590020791.0

Will Rachel's infamous English trifle, complete with beef and peas, be included?

Of course it will!

The book's description says that the recipe for Rachel's trifle is indeed in the book, though we can't yet confirm whether the beef is included.

The cookbook is set to be released on September 22nd...

But you can preorder it on Amazon here. Happy cooking! For more on Friends, keep scrolling for the most iconic moments across the whole ten seasons...