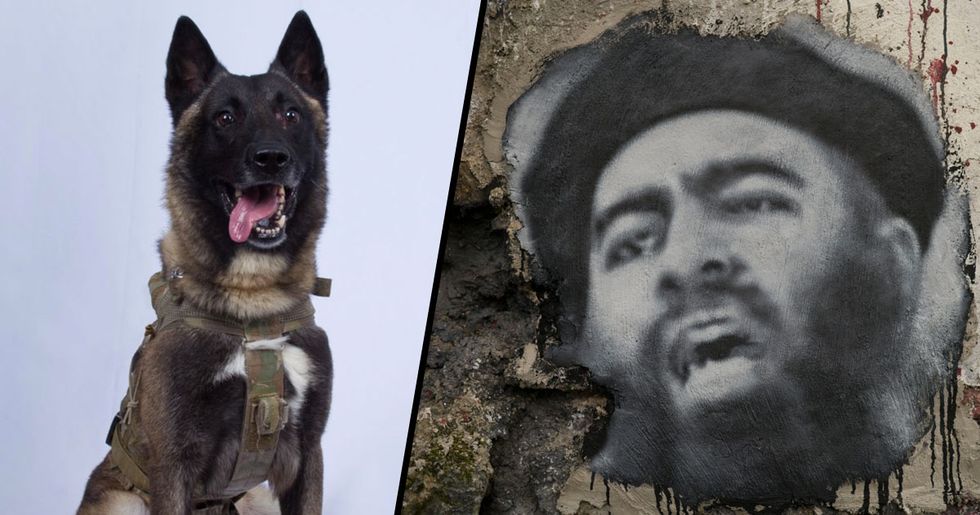 Over the weekend, the President of the United States claimed that ISIS leader, Abu Bakr al-Baghdadi, has been found dead. US special forces chased him into a dead-end tunnel in north-west Syria and al-Baghdadi, soon after, detonated a suicide vest.

At the press conference held at the White House, President Trump claimed that the United States brought the "world's greatest terrorist leader to justice."

Now, it's been revealed that a very special canine had a crucial role in taking down the ISIS leader and the internet is in awe of this brave pooch. Keep reading for more on the story and the military pup.

US special forces chased him into a dead-end tunnel and he detonated a suicide vest.

The raid was carried out in north-west Syria.

It was at a press conference held at the White House that Trump announced: "Abu Bakr al-Baghdadi is dead."

And that's not all he said.

He also claimed that the Islamic State leader died "whimpering and crying and screaming" as he ran from the special forces.

al-Baghdadi took 3 of his children with him.

They died in the blast alongside their father. al-Baghdadi had reportedly joined the terror group, al-Qaeda, and later assumed control of the Islamic State of Iraq and has been overseeing the rise of ISIS for 5 years.

"The thug who tried so hard to intimidate others spent his last moments in utter fear," Trump added.

"In total panic and dread, terrified of the American forces bearing down on him."

"The world is now a much safer place." The President watched the raid in real-time from the White House Situation Room.

It has been reported that several members of al-Baghdadi's team were also killed.

No US personnel were killed in the explosion.

"This raid was impeccable and could only have taken place with the acknowledgment and help of certain other nations and people," Trump said.

The world has spoken in response to the killing.

He called for "unified action" and "a comprehensive perspective that takes into account the security, development and ideological dimensions" in the fight against groups such as ISIS.

Russia, on the other hand, was skeptical.

The Russian defense ministry reportedly reacted to the news with skepticism, saying that "it had no reliable information on the US operation."

Rumors that al-Baghdadi was dead began circling in 2014.

But he frequently quashed those rumors himself by releasing audio recordings, ABC News reports.

And back in 2017, there were rumors that Russia had killed al-Baghdadi in an airstrike.

The Russian foreign minister, Sergey Lavrov, said at the time: "So far, I have no 100% confirmation of the information that Abu Bakr al-Baghdadi has been killed," so it may come as no surprise that Russia is a little skeptical when no proof has been provided as of yet.

Yesterday, Donald Trump tweeted a picture of the pup who helped "in capturing and killing the Leader of ISIS."

And he's as adorable as he is brave!

It seems like the pooch chased al-Baghdadi through the tunnel.

Jodey Arrington, a representative for Texas, wrote: "This weekend, man's best friend was also freedom's best friend. Wishing a speedy recovery to our favorite four-legged fighter who served our country alongside the brave Special Ops team that took down ISIS leader Abu Bakr al-Baghdadi." We thank this special pup, as well, of course, as the US special forces, for their bravery.
20%

$69.95 $55.96
Buy Now
See More Deals
We hope you find these deals as awesome as we do! Just an FYI: we may receive a share of sales from links on this page