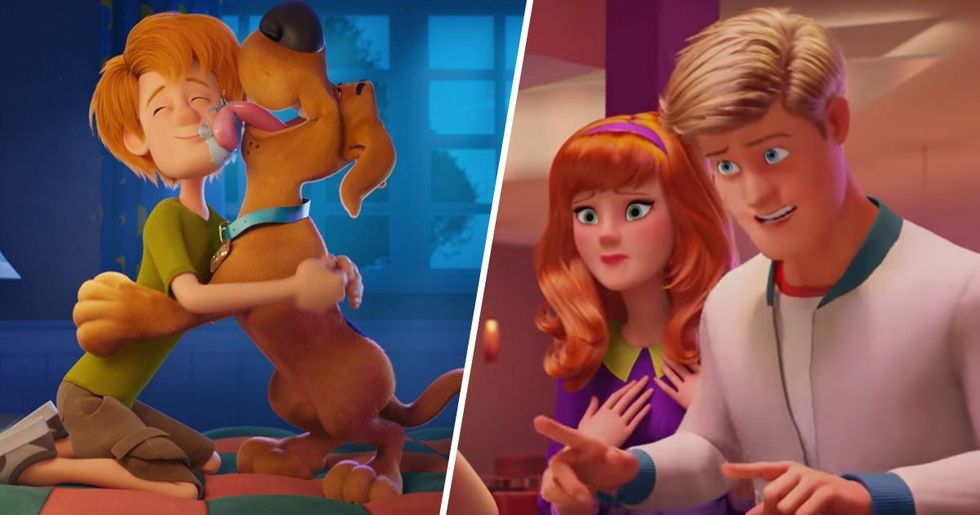 Scooby-Doo is a franchise that we all know and love. It's helped to shape children's lives since it was first created in 1969, and the cartoon has undergone several different phases with a whole host of different people voicing the show's main characters, Fred, Daphne, Velma, Shaggy and, of course, Scooby. The gang was famously brought to life in 2002 when the beloved franchise got the live-action treatment - which proved to be equally as successful as its cartoon predecessors.

Now, the detective gang is returning to the big screen once again, this time in animated form. The movie will be called Scoob!, the star-studded cast has been chosen, and the first trailer has finally dropped.

It looks like this is going to be one re-make that shouldn't be missed. Keep scrolling to get all the details as well as an all-important look at the official trailer.

You know who they are... Fred is the leader of the group; Daphne knows karate (but is often kidnapped); Velma is the intelligent one (you can tell because she wears glasses), and Shaggy is usually scared... and hungry (us too). Shaggy and Scooby usually run away from danger, while the others try to solve the mysteries. We'd be with Shaggy and Scooby, we think!

Although the show has been running for nearly half a century, the storyline does not tend to diverge much from the original formula. And that's what makes it so great! The team stumbles across a mystery, which usually looks somewhat supernatural. They follow clues until they realize that it is actually a regular person trying to pull some sort of hoax. That's when they unmask them and hand them over to the authorities. Then the bad guy mumbles one of our favorite phrases in TV history!

William Hanna and Joseph Barbera created many cartoons, starting way back in the fifties. They were the brains behind Tom and Jerry, The Flintstones, The Yogi Bear Show, The Smurfs, Wacky Races, and of course, Scooby-Doo, Where Are You! Now that it has become a member of the Warner Bros family, it has been decided that the gang should make a return to our screens.

In 2002, a live-action movie was made starring Freddie Prinze Jr as Fred, Sarah Michelle Gellar as Daphne, Linda Cardellini as Velma, and Matthew Lillard as Shaggy. There was originally supposed to be 3 movies, but the 2004 sequel didn't do so great. There were 2 more movies released in 2009 and 2010, but these were released as TV movies rather than as big-screen productions. This new movie looks like it's shaping up to be far better already!

The movie is bringing in some characters from our other favorite franchises, too! The main villain in this movie will be Dick Dastardly, the notorious cheat in Wacky Races! Although, so far we don't know who will voice him. We're also waiting to see if his trusty side-kick, Muttley, will be alongside him. Who do you think would win in a head-to-head between Scooby and Muttley?

Seyfried got the role of Sophie in the ABBA extravaganza that is Mamma Mia!, which grossed over six-hundred million dollars worldwide. She reprised the role a decade later in Mamma Mia! Here We Go Again. Alongside many other movies, she also played Cosette in the Academy Award-nominated, Les Misérables. Now, she'll be starring as Daphne in Scoob. Hopefully, as this movie will probably be an updated version of the "Scooby" world, Daphne will be less of a damsel-in-distress, and the movie will, instead, focus more on her strengths.

Zac Efron will be taking on the role of their peppy leader, Fred. He first came to fame through the beloved Disney movie, High School Musical. He has since also shown off his musical skills in both Hairspray and Greatest Showman. Will this Scooby-Doo re-make be turning into a musical, or is it just a coincidence?

In a bit of a departure from his usual, light-hearted movies, Efron has taken on the role of the notorious serial killer, Ted Bundy, in Extremely Wicked, Shockingly Evil and Vile. People have been very impressed with Efron's performance, but the main thing that's got people talking is his hair!

Have you ever seen the "panini" look irl?

Efron dyed his hair blond for his movie with Matthew McConnaughey, The Beach Bum. He then paired it with a darker beard, with lines cut into it... It certainly does resemble a panini... but is this the next big trend? Or is it just an Efron thing?

Progress on the new movie seems well and truly underway as the official teaser trailer has just dropped.

The teaser first starts with Shaggy and Scooby settling into a movie theater with their snacks (obviously) and talking about watching the trailer for Scoob!. “Maybe it’s time we make our new movie," Scooby says to Shaggy. “Good idea Scoob, but first we need a trailer," Shaggy replies. “Oh, can you do the trailer guy voice?"

The proper trailer then follows...

We get a taste of what's so to come when the trailer properly kicks in. A young Shaggy on the beach is ready to tuck into a sandwich before a small puppy comes by and shares the second half with him. But when a cop tries to take the stray dog away, Shaggy decides to keep him as his own.

So it looks like the movie is set to be an origin story for the mystery-solving gang.

The teaser then shows the duo becoming best friends and meeting Fred, Velma, and Daphne while out trick-or-treating for Halloween. As the rest of the trailer unfolds, we watch as Shaggy and Scooby are abducted by a mysterious aircraft while the rest of the gang attempt to solve their strange disappearance.

Now we're even more excited for the movie to hit screens!

Are you excited for the new movie?

Scooby-Doo is a classic for a reason. From the psychedelic color-scheme to the cries of "zoinks," "jinkies," and "jeepers," and, of course, the old howl of "scooby-dooby-dooooooo," this movie has a lot of history to fit in. And they'd better not miss anything! It looks like this movie is set to launch the franchise back into being a great success. The only problem is, we'll have to wait until next year to see it!