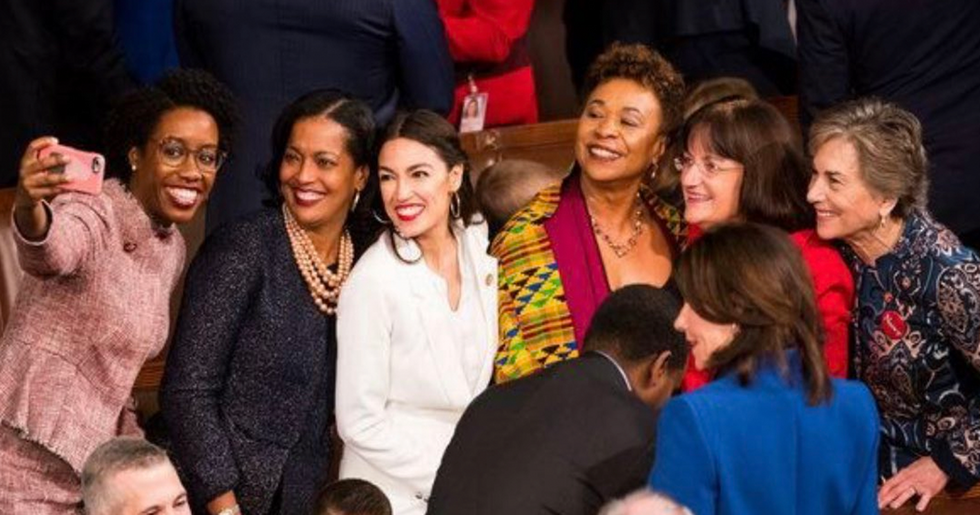 History was made today when Rashida Tlaib, a Muslim-American woman of Palestinian descent from Michigan, and Ilhan Omar, a Somali-American politician from Minnesota, were sworn into the US House of Representatives.

Tlaib and Omar were both sworn in on the Quran — Tlaib with her own copy and Omar with her late grandfather's.

Omar arrived in the States as a refugee escaping Somalia’s war 23 years ago.

Omar's father took over her Instagram for a day this week and wrote an incredibly heartwarming and poignant post that said: "Hey, Ilhan’s dad here: Twenty-three years ago, my family and I arrived at an airport in Washington DC. We were newly arrived refugees in this country, from a refugee camp in Kenya. I had heard about the promise of America, prosperity for all and hope for a better tomorrow. I could never have dreamed that twenty-three years later I would return to the same airport with my daughter Ilhan by my side, the day before she is to be sworn in as the first Somali-American elected to the United States Congress. You, of course, can imagine how emotional this is and why I am incredibly proud of her. It’s an honor to have her represent me and our family is so humbled that Ilhan has the opportunity to serve in our democracy. I wish Ilhan's grandfather could be here to witness this historic moment. He will be here in spirit as Ilhan will place her hand on his Quran for the ceremonial swearing-in. Tomorrow, members of Ilhan's team will be covering the events of the day. We all hope you will follow along and share in our excitement for what the New Year will bring. As Ilhan would say, forward together. Nur Mohamed #Hope #ilhan"

Omar, whose mother died when she was only two years old, was raised by her father and grandfather in Mogadishu, Somalia, Kenya, and then Virginia, and finally Minnesota.

Her father worked as a taxi driver and postal worker to support the family and her grandfather took her to caucus meetings to serve as an interpreter. She graduated from North Dakota State University with degrees in both political science and international studies.

Tlaib is the U.S. Representative for Michigan's 13th Congressional district.

To those who were upset to see Muslim women in office, Tlaib said this:

“It’s important to me because a lot of Americans have this kind of feeling that Islam is somehow foreign to American history. Muslims were there at the beginning," she said to the Detroit Free Press.

Omar and Tlaib join an incredible group of women who were also sworn in today, including: