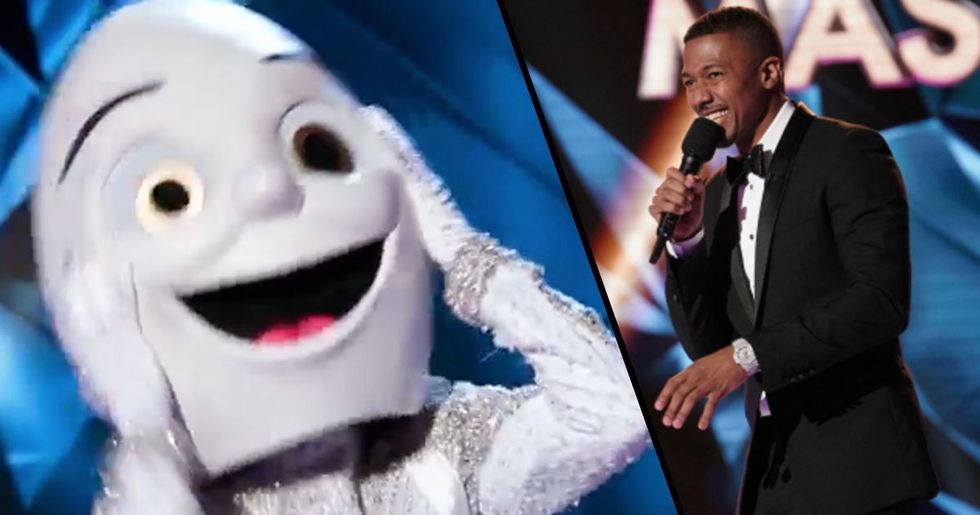 This week, the second season of the wacky singing competition show, The Masked Singer, premiered and we saw half of the contestants take to the stage and battle it out.

Each week, the celebs are randomly paired up as they make their way towards the finale, and this week we saw Butterfly vs Egg, Thingamajig vs Skeleton, Ladybug vs Rottweiler, and Tree vs Ice Cream.

But before we've even had a chance to see the other 8 celebs take to the stage, 2 stars have already been unmasked and, shockingly, the judges actually guessed the identity of one of the eliminated stars correctly... and, given their track record last year, it's a pretty impressive turn of events.

Keep scrolling to find out who the eliminated stars are and get a glimpse at the show-stopping performances from the disguised celebs.

The long-anticipated return of the hit singing show finally happened this week - airing its jam-packed 2-hour premiere on FOX.

But, first, in case you've been living under a rock... here's a brief overview of what the show entails.

The show centers around a bunch of disguised celebrities dressed in over-the-top costumes who take to the stage to sing in front of a panel of judges (Ken Jeong, Nicole Scherzinger, Jenny McCarthy, and Robin Thicke), who try to guess who they are.

Every week, at least one masked singer is eliminated and subsequently unmasked.

As you'd expect, the last one standing is the overall winner of the competition.

Of course, those of us watching at home love to have a stab at guessing who the disguised celebs are.

It's all part of the fun.

And was revealed to be singer, T-Pain.

Overall, the show is a big hit.

Despite its slightly bizarre premise, the wacky costumes and element of mystery has clearly got thousands of us glued to our screens.

This week, the highly anticipated premiere of season 2 aired.

Following weeks of tantalizing clues and sneak peeks, we finally got to see half of the line up of stars take to the stage.

The celebs were randomly paired up and pit against each other.

But, shockingly, 2 celebs were unmasked.

We haven't even had a chance to see the second half of the celebrity lineup yet, but during this week's premiere, 2 of the celebs were unmasked and subsequently eliminated.

And in an even more shocking twist, 2 of the judges actually guessed one of the unmasked celebs correctly...

If you've watched the first season, you'll know the panelists didn't really have a glowing reputation for guessing correctly, so this is a pretty big deal.

But, before we reveal who the stars were, let's recap the electric performances.

First up, we had Butterfly vs Egg. Butterly certainly sounded like a professional singer and got off to a strong start, performing a rendition of "Bang Bang" by Ariana Grande, Nicki Minaj, and Jessie J. While she didn't do too much in terms of fancy dance moves (can you blame her in that costume?) she certainly commanded the stage.

Egg, on the other hand, put on a rather flamboyant performance.

But, unlike Butterfly, he seemed a little out of his depth on the stage, while performing Lady Gaga's breakthrough hit "Just Dance" (a song choice that was massively celebrated by both the panelists and audience). But, as you probably guessed... Butterfly won the battle.

Next up we've got Thingamajig vs Skeleton.

Thingamajig was quite the dark horse, shocking everyone was a soulful, easy-listening singing voice that no one was expecting. The vibrant furry monster performed "Easy" by The Commodores and had people speculating whether he belongs to the world of basketball due to his lean figure.

Skeleton then delivered nothing short of an over-the-top performance.

Skeleton is clearly a natural performer, giving us laugh-inducing rap spectacle to "Rappers Delight" by The Sugarhill Gang. As far as the judges' guess goes, they reckon he's some kind of comedian. But ultimately, Thingamajig's silky singing voice captivated the audience and crowned him the winner of this battle.

As the 2 losers of Group A, Egg and Skeleton took to the stage together in a smackdown.

As a new addition to this season, the losers get to perform together and battle it out to stay in the running. While the 2 weren't groundbreaking vocalists, Skeleton clearly seized the opportunity more, and his personality won him the smackdown.

Then it was time for Group B, and first up was Ladybug vs Rottweiler.

Ladybug was pretty much a bag of nerves when she took to the stage to perform "Holding Out For A Hero" by Bonnie Tyler. Her voice was wobbly and slightly out of tune at first but as she eased into it, by the end she actually, sounded really impressive. In terms of guesses, hints about being born into the spotlight led Robin towards Lily Collins, but Jenny guessed Willow Smith.

The panel initially thought he was an athlete of some sort, so were completely taken aback by his powerful, soulful voice. As he took to the stage to cover "Maneater" by Hall & Oates, people seemed no closer to guessing his identity. Given his shocking vocal ability, Rotterwiler won this face-off.

Next up we had Tree vs Ice Cream.

Tree's stage presence wasn't exactly spectacular so you could tell that singing wasn't her forte. But, as she eased herself into her performance of "High Hopes" by Panic! At The Disco, she really started to gain confidence. Once again, guesses for Tree were scarce, but many believe she's known primarily for being a baker, with Rachael Ray being thrown into the mix. Ice cream, on the other hand, lacked a lot of stage presence and singing clearly isn't his day job. The jolly character sang viral hit "Old Town Road" by Lil Nas X and generally speaking, his voice wasn't too bad. But, it was Tree that came out on top for this battle.

So, it meant Ice cream and Ladybug went head to head in the second smackdown.

Ladybug's vocal ability really shone through, whereas Ice Cream, while his performance was fun, lacked even more vocal ability this time around. This ultimately meant that Ladybug came out on top.

So Egg and Ice Cream were subsequently unmasked and eliminated...

We're sure you're dying to know who the celebs were... Egg turned out to be figure skater and fashion designer, Johnny Weir, true to several predictions and judges, Robin and Jenny, who managed to guess his identity correctly. Meanwhile, Ice Cream was revealed to be YouTube star, Tyler “Ninja" Blevins. The wacky competition continues as "Group C" takes to the stage next week at 8 p.m. ET on FOX.