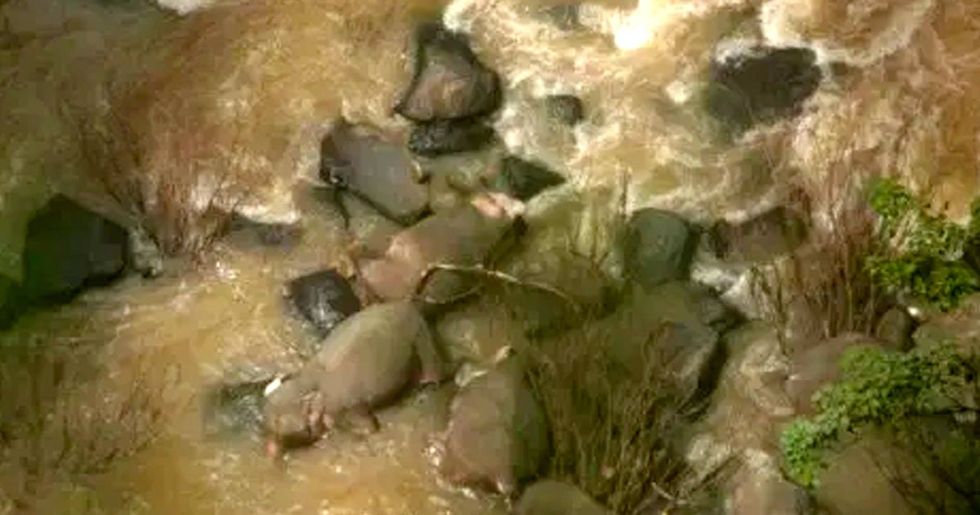 Five Elephants Die Trying to Save Baby Who Slipped Over Waterfall

Nature. It is equally fascinating, beautiful, heartbreaking, and tragic. Nature can be warming; it can also be relentlessly cruel - and that, I suppose, is why it is so captivating to witness.

This story is not beautiful. It is frankly distressing - and it just goes to show how bitterly cruel nature can be at times.

This is the story of how a baby elephant tragically slipped over a waterfall, and of how five other members of the herd died trying to save her.

Read on for the full story.

One of the youngest members of the herd tripped over a waterfall.

So the story begins when a young member of the elephant herd tripped over the edge of a cliff and fell down a waterfall on Saturday morning.

The baby's mother tried to save her.

As maternal instinct kicked in, the calf's mother drastically tried to save her baby, however tragically the calf had already drowned in the water below.

The mother then died trying to save her.

Heartbreakingly, in her efforts to save her child, the mother of the calf also died on the waterfall at Khao Yai National Park in South Thailand.

Two other elephants were trapped.

A devastating video shows the two remaining elephants in the herd, trapped at the top of the cliff-side, as rapid flowing rough water crashes below them.

Park Rangers rushed to the scene.

Rangers drastically tried to save the remaining elephants after rushing to the scene. The rangers received a call claiming a number of elephants were stranded on a road by the waterfall.

Despite their efforts, there was little they could do.

Heartbreakingly, despite the rangers' best efforts it has been reported that so far six elephants have died after falling from the cliff side.

The body of the baby elephant was found first.

Almost three hours after the rangers were called out they discovered the body of a three-year-old elephant at the base of the waterfall. Shortly afterwards they discovered five more corpses nearby.

But this story gets even sadder.

As if this story was not distressing enough, it is thought that the remaining few members of the herd will probably find it unbelievably hard to continue as normal due to the heartbreak and loss they have gone through in one night.

Elephants are known to express grief.

Edwin Wiek, the founder of Wildlife Friends Foundation Thailand, explained to the BBC that the remaining elephants of the herd will find it emotionally difficult to overcome the trauma of losing their family. This will be especially hard as elephants have been known to show signs of grief.

The two remaining elephants of the herd will struggle even more so because elephants rely on the other members of their herd for protection and for help finding food. Wiek added:

It’s like losing half your family. There’s nothing you can do, it’s nature unfortunately.

The park has closed their waterfall area.

In the immediate aftermath of the tragedy, Khao Yai National Park have announced they will be closing the waterfall area for the time being.

The waterfall is incredibly dangerous.

The waterfall, known as Haew Narok (Hell's Fall), has a dark history with many similar incidents.

One such incident happened in 1992.

An infamous tragedy took place at the same waterfall in 1992 when a herd of eight elephants fell over the cliff edge. This particular disaster brought the waterfall to national attention in Thailand.

There are around 7,000 Asian elephants who continue to live in Thailand, however more than half of them are living in captivity.

The Asian elephant is the largest living mammal in Asia.

The Asian elephant is by far the largest living mammal in Asia, however since 1986 they have been listed as endangered.

Their population is declining rapidly.

Over the past three generations, roughly around 60-75 years, the Asian elephant population has drastically declined. It is thought that the population has been cut by at least 50%.

Their lives are threatened by numerous factors.

It is believed that the rapid decline in population is due to numerous factors, many of them a direct result of man's actions. These factors are poaching, loss of habitat, habitat degradation, and fragmentation.

Will mankind ever realize the error of their ways?

With all this news of endangered species and climate change, all of which are accelerated by mankind's decisions, we have to ponder: when will we learn? When it's too late? When there are no Asian elephants? When there are no ice caps? When the world is flooded and burning? Or will we make the change and improve our one world? I hope we do.