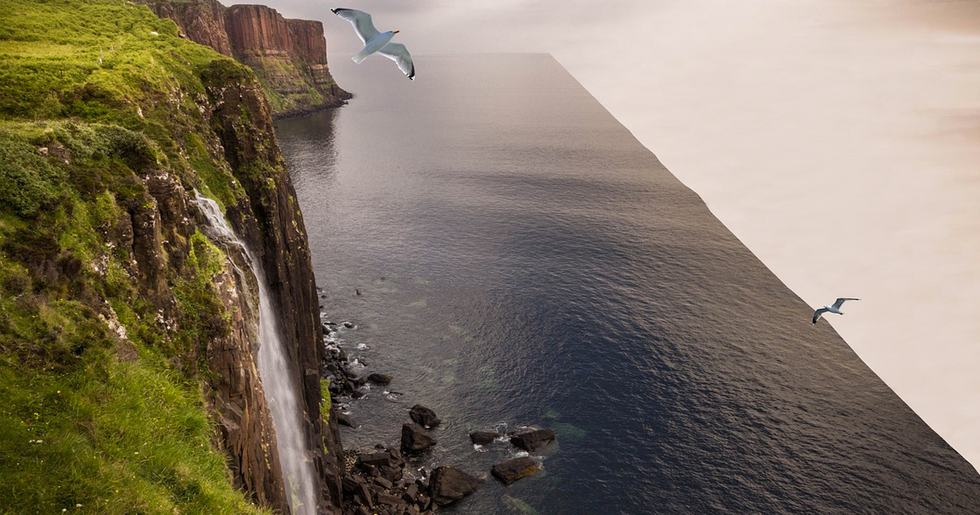 A couple of flat earthers have been quarantined after they were caught trying to "find the end of the world" during a tight lockdown.

This story is both mind-boggling and hilarious...

The Flat Earth Society is perhaps one of the most bizarre conspiracies our world has ever seen.

Those who are part of the Flat Earth Society claim to believe the Earth is flat, rather than spherical.

Their reasoning behind their theory is pretty basic...

Walking around on the planet's surface looks and feels flat... therefore it must be flat.

They then deem all evidence that suggests otherwise as "fake."

You know the images of our planet and the rest of the solar system? Well, they're all a result of some very adept photoshopping... Apparently.

And, on top of their beliefs regarding the flatness of our planet...

They also preach a whole host of bizarre ideologies, such as the fact that the sun isn't millions of miles away, but incredibly close and local.

And they have shut down every credible sources.

According to the Flat Earth Society, NASA is merely a hoax company run by clowns. Oh, and every mission into space has been a well set-up deception.

Obviously, most of us simply laugh at this barbarity.

Flat Earth IS NOT about Science, it's about Denialism. The only important thing is Lie and hide well proven facts,… https://t.co/n16OCpfLQe
— Truth Revealer (@Truth Revealer)1590372537.0

But there are a surprisingly high number of flat earthers out there. A poll conducted in 2018 asked 8,215 respondents, “Do you believe that the world is round or flat," and a staggering 2 percent of the chose “I have always believed the world is flat."

Various celebrities have even added to the Flat Earth Society Hype...

Including the rapper, B.o.B - aka, Bobby Ray Simmons Jr, who revealed his beliefs on Twitter.

So to this very day, thousands of people claim to be a part of the Flat Earth Society...

When will they learn?!

Well, it seems that in most recent times, a couple of flat earthers learned their lesson the hard way...

And it's all to do with the current pandemic that we're living through.

A couple from Italy decided to embark on an adventure together...

To find the end of the flat Earth that they're living upon. Yep, you read that correctly.

The pair, who haven't been named, were convinced they would be able to travel to the "end of the Earth"...

Because, you know, the Earth is flat!

Well, when the couple left their home in Venice, strict lockdown measures were in place thanks to the pandemic.

But this didn't stop them! They tried to set sail to Lampedusa, which is an island between Sicily and North Africa, and they had set off in hope of finally finding solid evidence that there is an edge of the world.

Predictably, the hopeful couple didn't make it to their destination...

And they instead got as far as Ustica, an island north-west of Sicily. Salvatore Zichichi, a doctor of the maritime health office of the Ministry of Health, helped the pair after they got lost. He pointed out that they were using a compass to help them navigate. Yep, that's right... a compass.

"The funny thing is that they orient themselves with the compass, an instrument that works on the basis of terrestrial magnetism, a principle that they, as Flat Earthers, should reject." Seriously.

Trust me, it gets even better...

Metro reported that after the couple were found, they were taken into quarantine but tried to escape and get back to their boat. However, it didn't take long at all for them to be caught again and yet again placed into quarantine.

What on earth were they thinking?!

@ladbible I wonder if social distancing has pushed any flat earthers over the edge?
— Patrick Ryan (@Patrick Ryan)1599054968.0

We're sure that the couple is very embarrassed right now...

Or if not, they're planning their next plot to discover the flatness of our Earth.

Some people will just never learn...

And it seems likely that this adventurous couple are some of them!

Keep on reading to learn about the famous flat earther who died trying to prove his point in a homemade rocket...