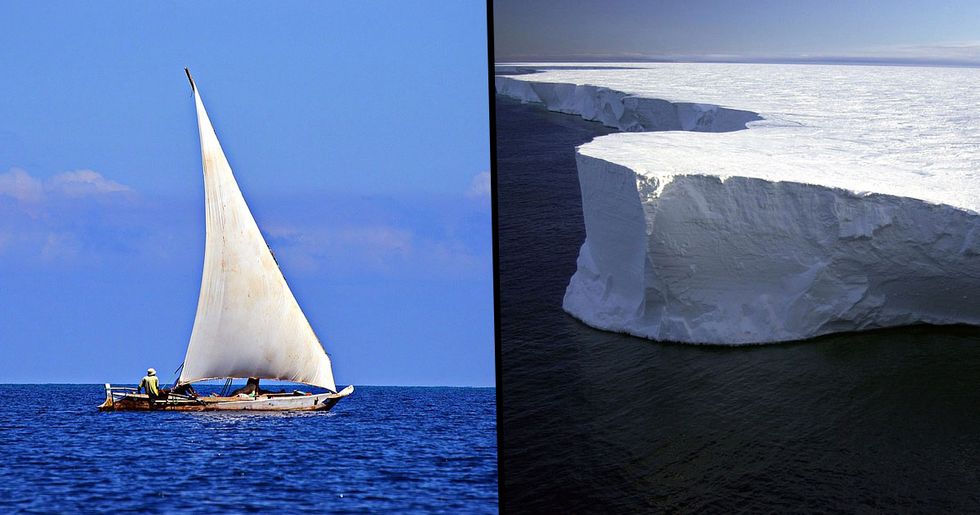 Flat Earthers to Sail to Antarctica to Prove Earth Isn't Round

We've known that the Earth is round for quite some time now. Even in Ancient Greece, various philosophers believed in such a possibility.

And although many of us prefer to live our lives never thinking about the shape of the planet at all, there are some that think about it pretty often. And they think it's flat.

Until now, it seemed that no one could prove that the world is not a beautiful, blue and green globe, but now a group of "Flat-Earthers" are planning to do the impossible, sailing to Antarctica to prove that, because the world's flat, they're going to fall off the Earth - or hit an ice wall.

For some, a trip to Antarctica would a dream.

Known for some of the most beautiful scenery in the world, a trip to Antarctica would be a once-in-a-lifetime experience for most.

But for some, it would be a chance to prove the impossible.

And a chance to prove that you're not crazy, after all.

Next year, one group is setting out to Antartica.

And they're hoping that their trip will prove one thing...

That the Earth is flat.

Yes, there are people that still believe this...

Because there still remains a whole movement of people who believe that the world is flat.

But not only that!

They also believe that the flat world is surrounded by a perimeter of ice - a wall of ice that is one-hundred and fifty foot thick and one-hundred and sixty-five foot high.

Except boring, because it’s our world, so there’s no dragons or ice zombies to make things interesting.

But what lies beyond the wall?

Well according to the Flat Earth Society website: "Beyond the Ice Wall is anyone’s guess. How far the ice extends, how it terminates, and what exists beyond it, are questions to which no present human experience can reply."

It’s almost as if there is no ice wall at all… as if the world isn’t flat.

But the "Flat-Earthers" still want answers.

And they’re hoping that their journey will give them the information they're after.

Hard to believe that some people really believe this...

The notion of a flat Earth sounds so medieval. Maybe it would make sense in a pre-technological world...

But people have considered the world to be round for centuries.

Greek philosophers such as Plato, who was writing in the 4th and 5th Centuries, also believed that the world was globe-shaped.

It wasn’t until much later that the concept of a flat Earth was introduced.

It was actually in the 17th century that the "flat earth" concept was introduced.

Why fix a theory if it's not broken, guys?

But this doesn't mean that modern-day Flat-Earthers are necessarily Christian.

No, in fact, there’s a whole rainbow of people who are a part of the society.

"There’s a whole mix of people."

According to Michael Marshall, a rational thinker and director of the Good Thinking Society, there’s a "whole mix of people" who believe that the world's flat.

But how many people actually believe this?

According to a survey conducted by YouGov, last year, only two-thirds of Americans have always believed that the world is round.

Flat-Earthers tend to only believe what they want to believe.

Like most conspiracy-theorists, Flat-Earthers also suffer from "confirmation-bias", meaning that they only believe and support data that confirms their own beliefs.

Actual scientists don't do this.

Most cases of flat earth "discoveries" could be labelled as pseudo-science.

The most famous flat earth experiment was conducted into 1838, by Samuel Rowbotham. The experiment is now known as the Bedford Level Experiment.

And he came pretty close to confirming the theory.

But he didn’t take refraction into account. This was pretty important because refraction means that light bends to match the curve of the Earth… because it's round.

But Flat-Earthers remain persistent in their beliefs.

They even discredit the many photos of our planet taken from space as being Government-made fakes.

"Did you know that all images of Earth which show a curved horizon or a spherical shape are computer generated images (proven with Photoshop programs and analysis), artistic renderings (acknowledged by Nasa), or captured via fisheye/wide-angle curved lens (producing a curved appearance)?"

Although they do have their own, divided opinions among themselves.

What lies beyond the Earth is a dividing topic among Flat-Earthers, some believing that, actually, you can’t sail off the edge of the world.

But even this isn’t enough to stop those that believe that you can.

Jay Decasby, a prominent and vocal Flat-Earther, remains certain that the voyage will be a success.

As was recently discussed...

When talked to Forbes magazine, Decasby had this to say: "All we have to do to shut this debate down once and for all is get the distance of the coast of Antarctica. If we can sail all the way around it, we will [. . .] prove it’s the outer edges of flat earth and refute entirely every single argument anyone can possibly try to pitch for the sun-worshipping cult of heliocentrism [a belief that the Sun is at the centre of the universe]."

And the voyage is set to take place soon.

The "Flat Earth Cruise" is preparing to set sail next year.

The Cruise has been described by Flat-Earthers as as "the biggest, boldest, best adventure yet." But that’s all we know for, everything else about the trip is being kept under wraps.

We guess this means they're brave.

These people are sailing into the unknown - and if they're right, they're risking falling off the face of the Earth.

Let’s see what happens, then.