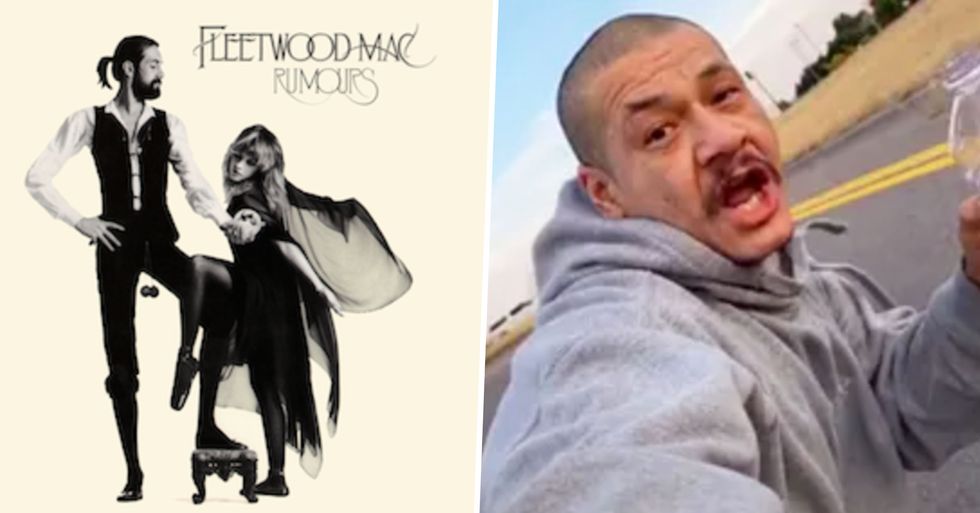 Because who doesn't love Fleetwood Mac after watching the viral "Dreams" TikTok video?

The viral "Dreams" TikTok video has got us all listening to Fleetwood Mac...

And so much so, that one of their most iconic albums is now back in the charts!

Now, Fleetwood Mac has been around for decades.

Formed back in 1967, the British-American rock band has cemented themselves as one of the most timeless bands in the world.

Guitarist Peter Green was the one who started the band...

Fleetwood Mac found instant success with its debut album and the hit single Albatross in 1968.

But shortly after this, the band went through a number of personnel changes including Green’s departure and the addition of McVie’s wife, Christine.

The band made the big move to the United States in 1974 and they ultimately gained singer-songwriters, Stevie Nicks and Lindsey Buckingham.

They gave the band the injection of pop that resulted in the multimillion-selling Fleetwood Mac in 1975 and Rumours.

Rumors gave insight into the breakups of John McVies’ marriage and Buckingham and Nicks’s turbulent relationship...

And this even won the band a Grammy Award for album of the year.

They're now one of the most iconic bands of all time...

And even though only 6 solid members remain, they continue to sell out every single tour they embark on and hold a huge worldwide fan base.

Of course, the younger generation isn't as familiar with Fleetwood Mac as us oldies are...

But thanks to the power of social media and a recent viral video, youngsters are now obsessed with one of the band's most iconic tracks.

And although it's always been a fan favorite, the track has now been plunged back into the limelight thanks to a mesmerizing TikTok video.

Nathan Apodaca uploaded a rather bizarre video on TikTok recently.

The Idaho-based laborer, who goes by the TikTok user name 420doggface208, filmed himself cruising along on his skateboard with a bottle of Ocean Spray cranberry-raspberry juice in hand... listening to Fleetwood Mac's "Dreams."

It's perhaps the most zen thing you'll ever watch...

And the man is just loving life while swigging from his Ocean Spray bottle and vibing to the timeless track.

Apodaca then gazes into the camera...

And starts joyfully singing along to the song, creating one of the most mesmerizing videos you'll ever watch.

It didn't take long for the video to go viral...

And people became obsessed with Apodaca's upbeat outlook on life.

He has proven the power of music...

And videos like this are what we all need in 2020.

And following the online eruption, something unbelievable happened.

Mick Fleetwood himself decided to reach out to Apodaca.

The Fleetwood Mac OG decided to recreate the video...

With cran-raspberry juice in hand, obviously.

"@420doggface208 Had it right. Dreams and Cranberry just hits different."

And he has inspired thousands more to join in.

And to make things even better...

Ocean Spray surprised Apodaca with a brand new truck in the exact same color as his favorite cran-raspberry drink!

We all need this kind of joy in our lives...

And it seems that Apodaca's positive energy has even benefited Fleetwood Mac themselves.

Reports are in that Rumours, the album that "Dreams" is on, is now back in the charts.

The Independent has reported that since Apodaca's video was uploaded, "Dreams" has received 8.47 million streams in the U.S alone.

The song has also returned to the U.K charts...

Which just goes to show the incredible power of social media!

For more, keep on reading to find out about the TikTok video that's blowing people's minds...