Flight Attendants Reveal the Dirty Secrets of the Job | 22 Words 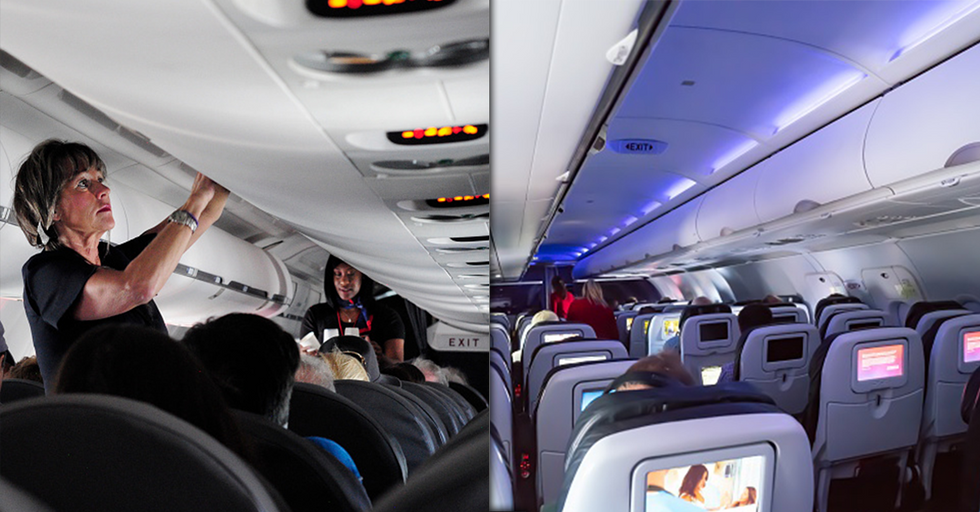 Flight Attendants Reveal the Dirty Secrets of the Job

If you've ever flown on a plane, then you've undoubtedly encountered some flight attendants. They're the people who are paid to deal with the grumpy, stinky, and rude passengers around you. And to deal with you. But you're never grumpy or rude, right? I hope not!

Anyway, a lot of people assume that flight attendants live a very glamorous lifestyle, flying all over the world and living most of their life "on vacation."

If you're not of those people, you're sorely mistaken. While being a flight attendant certainly has its perks (like free or deeply discounted air travel, for instance), it's also, you know, a job. And as with any job, there are plenty of annoying things that happen and can make someone dread coming into work. There are also all kinds of things going on behind the scenes when you're a flight attendant. Believe it or not, they're not just there to serve you drinks.

There's so much more to the job!

This is not helpful.

When people ask for the reason for a delay, we usually give a fake response because the REAL answer would spook passengers. "We have a minor technical problem and engineers are on their way" And in reality: The cabin pressure isn't working. –CheatingOutlaw

It means A LOT to us if a passenger actually says hello back to us and smiles. We'll remember your face. Believe me, because we got 150+ people who usually ignore us. One guy said "Hey good morning!" to me, and all flight I gave him alcohol on priority right away, while I made others wait 5-10 minutes because I was busy. Also, say "thank you." It really makes my day. I took count of how many "thanks" I got. 200 passengers and 18 said "Thanks." Sometimes I load my pockets with cookies, nuts, crackers, mini whiskey bottles, and whenever I pass by, I offer them. –AnotherOne

They have great perks!

Do I fly for free? Domestically yes, internationally you pay taxes in the flight home. This is all standby and you never know if there will be a seat or not. I’ve been stuck places many times (looking at you Athens). –Rayray888

We almost always pick our BFF or Boyfriend for the Flight who is simply the most attractive guy on the flight just for a bit of fun. We also discuss amongst us how nice our ‘side’ is. On wide-body aircraft, there are 2 aisles and we work on each side. Once we’ve done the initial drinks round we often have a casual chat over what they’re like; “My side is pretty nice, they’re drinking a lot of alcohol though. 34D is mean but there’s a family of four at the front who are lovely." –moaningpilot

Most airlines I've worked with have a monthly minimum, meaning I get paid for 75 hours a month regardless of if I'm actually flying that amount. –Hoffmana1

On the other hand:

We don’t get paid during the boarding process, delays or sit time in between flights, this is generally all airlines. We also don’t get paid for training except for maybe a few airlines. –Sweetpicklebbe

"Where are we flying over right now?" We never know. –SkyWaitress

Junior flight attendants are exhausted. Zombies walking around, facing minor hypoxia, sleep deprivation, negative bank accounts, and general anxiety. That was me during our airlines required ‘reserve’ period. It’s comparable to new RN’s and doctors who are on call. You can be on call for 24 hours, which means at any point you have two hours to be at the airport, in uniform, ready to fly any flight they assign you. Once you finish that assignment, which can be anywhere from 2 hours to 4 days, you have 9 hours of "rest" before you go back on call. –ukulelehey

Unless you're extremely lucky and your aircraft just rolled out of the hangar after major maintenance, there will absolutely be something broken in it. An aircraft can have a whole host of parts be broken and still be allowed to fly, the broken parts just get labeled, recorded, and put on the to-do list for the next time it goes to maintenance. –ConstableBlimeyChips

This does sound pretty tough.

The worst part for me is not being able to have a schedule. I can't reliably eat, work out, or sleep with any consistency. It's also pretty tough being away from home so often if you have anyone at home you want to see. Leaving my husband and dog alone all the time is tough for both me and him. –vixyy

They're not there only to serve you.

98% of our training is for 0.1% of our job that we hope to never use. I went to training for 6 weeks, and we spent 3 days on service. We’re trained to fight fires, treat medical emergencies, evacuate a plane in record time, and much more. Service is still a very important part of the job, as that’s what we do 99.9% of the time, but the majority of training goes into emergency situations. –EMTinprogress

Strangers on a plane.

We generally don't know each other before briefing. You'll hear a ton of us calling each other... "hey hun," "hey darling," "hey dude" — all of that is cause we don't remember their name lol. –FriendlySkyGuy

If you’re flying and you see a crew member sitting in a passenger seat they’re most likely commuting into work or going home, please don’t bother them. As a commuter myself it’s like having a second job and is very exhausting. –Sweetpicklebee

So that's why they always make those announcements.

A huge thing is that we legally have to tell you the seatbelt sign is on. If we don’t and FAA is on board we personally get fined for not informing a passenger the seatbelt sign is on. That’s not the only thing we can be fined for. Another example is like yesterday a man asked me for headphones while taxiing, I told him I wouldn’t be able to get them to him until after takeoff, that’s because if I did bring him headphones while taxiing I could be personally fined for doing something non-safety-related while taxiing. Once that door closes and we’re on the ground we cannot do anything unless it’s safety. –Sweetpicklebee

I'll get right on that.

When you ask us to change the temperature we pretend to do it. Planes are generally colder because if we hit turbulence warm temps will make the chances of someone puking much higher. No idea why. –AAKKMM

This is a clever idea.

I always liked the little-known fact that the reason for turning the cabin lights off at night, just before landing, is to allow enough time for the eyes to adjust to night vision. In case of a crash, you're already adjusted for the darkness to make it easier to see in the dark and find your way out of the aircraft and away from it in the darkness outside. You'll be thinking about this on your next night flight guaranteed! –TheClavster

When everyone stands near the gate, waiting for their boarding group to call, you prevent other passengers from getting on board. Gate agents and flight attendants affectionately refer to this cloud as "gate lice." –vertigo3pc

Pilot here. Don't drink the coffee. The water comes from the onboard system that has the fill port right next to the port the lavatories are drained from. The water system routinely fails E. coli checks. Also when you wash your hands using the same water make sure you always use the soap. Lastly, don't put your food directly on the tray tables. –GoHomePig

I never would have guessed!

Not cabin crew, but my GF is. She told me they’re not allowed to donate organs. Due to them flying so much, the constant change in air pressure affects their organs too much. –drofdeb

Long-range aircraft have a room with many beds where the crew sleeps for some time. For some of us is pretty obvious but I found many people who didn't know about that. –kaiservelo

That's what the chimes are for?

The chimes and dings you hear on the speaker all have a very specific meaning. A single high chime is a passenger call button going off, high then low chime is a call on the interphone from another crew member, and a double low chime indicates the plane is above/below 10,000 feet.. (indicators for final descent for landings, aka strap in and clean up.) —NarcissusNoir

Not a flight attendant, but used to clean planes. The biggest thing I think passengers don’t know...the plane is not a nail salon, no fingernail or toenail clipping. It’s disgusting. –InfiniteGrant

Keep your hands to yourself.

The amount of times someone has poked me in the waist, back of the head, and yes my butt in order to ask me to take their trash or some other stupid thing, is TOO DAMN HIGH! It is always interesting to me when people get offended because I will turn around and put my finger in their face saying "Don't touch me. Ever." –ismell07

OK, I definitely didn't know this.

Former baggage handler here. You guys pretty much all fly with at least one dead body 5-feet below you. You see a white box going up the belt loader that says “HR". Sure doesn’t stand for Human Resources It's Human Remains. –Aching

Drink plenty of water. A plane’s atmosphere is very dehydrating. We’re issued a 3-liter water bottle to drink per day. May sound weird but I started to not like the taste of plain water. –ihjsdiaf

I guess you should pack light.

Asking us to put up your bag is kind of a customer service taboo, due to policies and procedures. Many customers with injuries, older customers, or some women will assume flight attendants (usually males) can put bags in the bin for them but we are not allowed to do it by ourselves and ourselves alone. If we were to hurt our shoulder or back due to the weight of the bag by putting it in the overhead bin, many airlines would not compensate their flight attendants for an OJI (on the job injury). So if you need to put up your bag but cannot do it yourself...as much as it may suck, unfortunately, you need to check it or you just look inconsiderate. –MrDonutSlayer

When a flight attendant is standing at the boarding door and greeting people, we aren’t only greeting people. We're looking and monitoring people for potentially threatening behavior to other passengers or able-bodied people in case of an emergency situation. –MrDonutSlayer

I know what I'm doing on my next flight!

Long haul flight attendant here. Been at the job for 14 Years. Thank you to all the wonderful people who give us treats. We love packaged snacks such as chocolates and local treats. –iloveyouok Do you know someone who travels a lot? Share this with them!