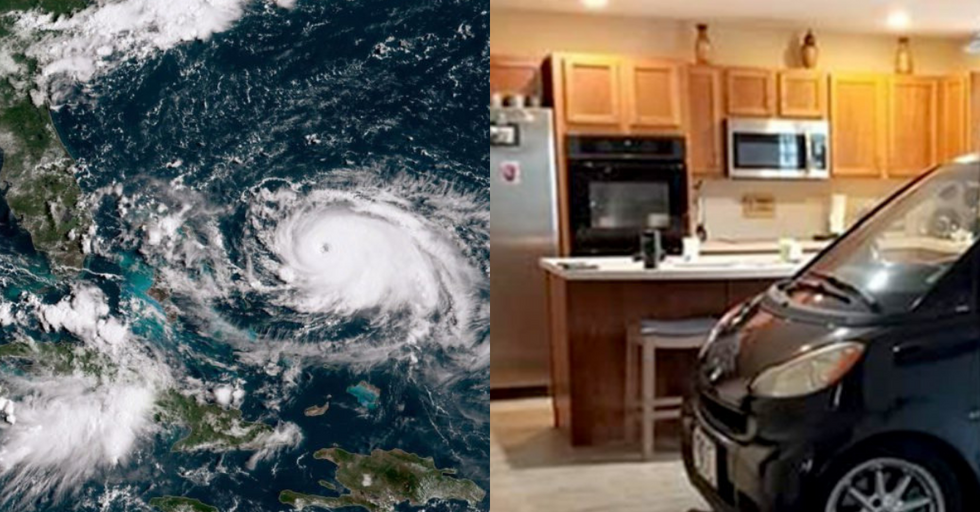 Hurricane and storm surge warnings are well and truly in effect for large areas along Florida’s east coast, as the formidable Hurricane Dorian stampedes its way across the Bahamas and directly into the state's path.

And now, the deadly storm, which is currently traveling over the Bahamas, is threatening to destroy people's homes and belongings.

That is, until one man took matters into his own hands...

It is predicted to hit the U.S. at some point this week...

One man took matters into his own hands...

A Florida man named Patrick Eldrige decided to park his Smart Car in his kitchen so it wouldn't blow away.

Eldridge's wife Jessica told Facebook that Patrick was "afraid his car might blow away." A valid concern for a small car!

So he decided the best course of action was to park it in the couple's Jacksonville home. In the kitchen.

Jessica's car, on the other hand, is not getting quite the same level of royal treatment that her husband's Smart Car is getting. According to Jessica, her car is just parked in the garage. I guess both cars can't fit in the kitchen, to be fair.

Most of the people who read the post applauded her husband but a select few called him out for driving what they deemed a "wimpy" car.

Commenters wrote things like "Did he spend the extra $19.99 and upgrade to hamsters from the standard gerbils?" "If my husband drove that pansy car, I'd put him outside with it," and "Your husband is really a wife." Yikes! Florida, you OK over there?

Jessica clapped back at the haters, explaining that her husband also owns a truck, pictured here.

Listen, jokes aside, the important thing here is that despite a literal Category 5 hurricane raging outside, one family's Smart Car is safe. Right? That's definitely the takeaway. Yep. Stay safe out there, Floridians!