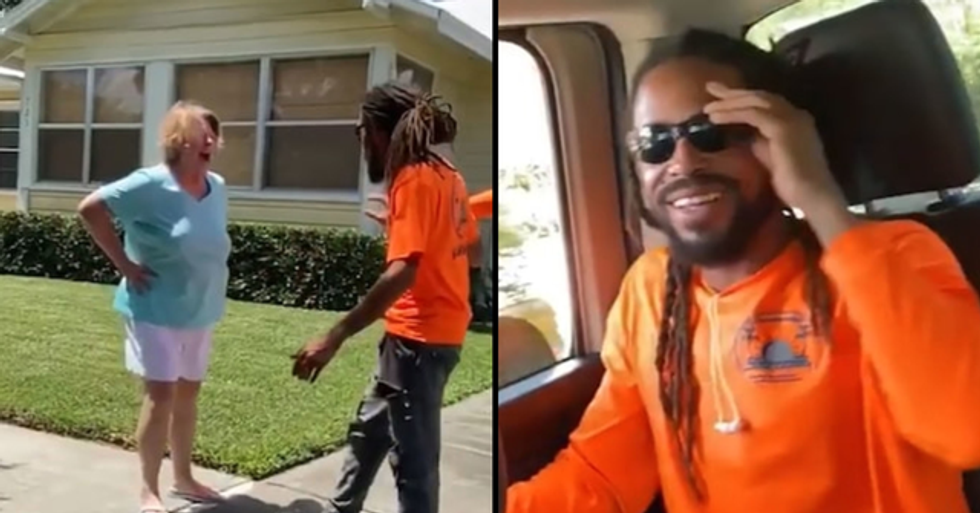 A pair of Florida landscapers have been praised online after they expertly handled a barrage of hateful and racist abuse from an enraged white woman... Or a "Karen", as the internet has christened her.

The footage is truly shocking...

A man was filmed last month calling the cops (shock) on a pair of peaceful protestors...

Then there was the "hammer-smash" Karen.

And now, yet another racist Karen video has emerged...

And this woman may just be the Queen of all Karens.

A woman, who is yet to be named, was filmed hurling a barrage of abuse at a pair of landscapers who were working on her neighbors garden.

As you may have guessed, the landscapers were Black...

But they handled the abuse with nothing but grace, decorum, and dignity.

It is assumed that the woman was aggravated by the noise the gardeners were making...

And, initially, she screamed "you f*****g b***h" repeatedly at the men, who merely laughed off her abuse, with one kindly explaining: "We ain't even doing nothing, we're out here working in ninety-four degrees!"

But then, she cranked it up a notch.

But, instead of retaliating, the men remained calm...

With one even telling her: "Have a blessed day ma'am!"

In a second video, the men can be seen calmly returning to their truck...

And, as they drive away, the furious Karen runs alongside the vehicle, continuing to spit her horrendous barrage of hate.

But still, the men remain calm...

And, instead of hurling abuse back, they wave at her as they drive away and call out: "I love you, God loves you. You're going to pass out in the sun! You gotta go into your house!"

And, just to make this story even better...

The police arrived shortly afterward and were filmed arresting the racist Karen, who continued to tell the officers to "f**k off."

A petition has been launched to get these men a well deserved day off...

You can watch the footage of the incident below.

But be warned, it is incredibly graphic. For more on the world of self-entitled Karens, keep scrolling to read about the group of Karens who started a fake government agency to threaten anyone enforcing face masks...