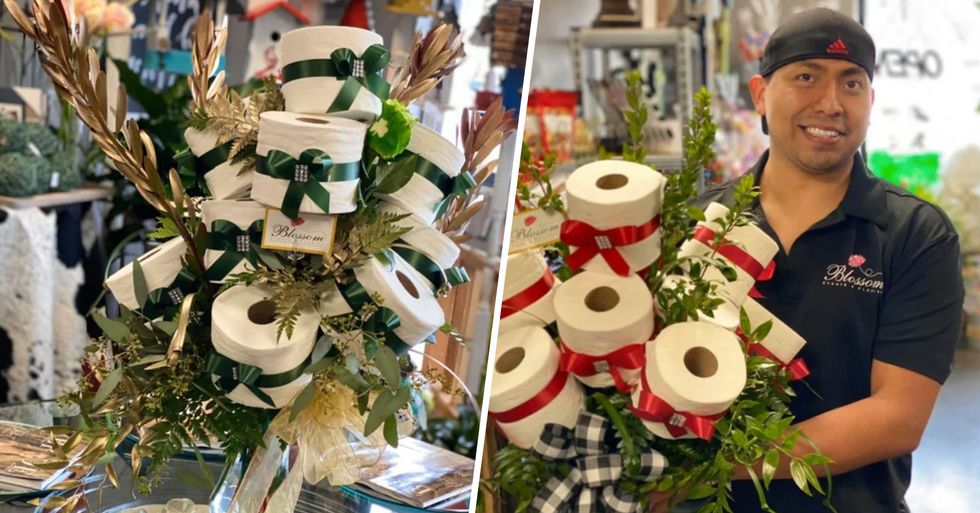 Amid the current worldwide toilet paper shortage, a florist decided to spruce up his floral bouquets by jokingly adding individual rolls of toilet paper... But people have loved his creation, and demand is now through the roof.

Keep scrolling for the full story, and to see the incredible invention for yourself.

It's 2020, and the demand for toilet paper has never been higher.

With the deadly COVID-19 sweeping the planet, millions have descended into mass hysteria - And have been frantically stocking up on toilet paper as a result. There's a sentence I never thought I'd write...

A large proportion of the world is currently in lockdown.

One of the more heartbreaking realities of this stockpiling is that many people, including the elderly and the vulnerable, have been left with nothing.

And none of us are entirely sure why.

And, in Australia, police have even been stationed in supermarkets to dish out the appropriate amount of toilet paper to customers.

Police officers in Australia handed out toilet paper and paper towels at a Sydney supermarket in an effort to calm… https://t.co/8ynWh9tDbJ
— ABC News (@ABC News)1584586080.0

Yeah, this is the world we're living in right now.

But, despite all the measures currently in place...

People are still struggling to get their hands on that ever-so-desired toilet paper.

And, while some are buying second-hand packets of the stuff online for outrageous prices...

Others are heading out to their florist for their toilet paper fix.

I know what you're thinking... How can a florist help in our quest for toilet paper?

In an attempt to make light of the current stockpiling situation, David decided to put together his very own toilet paper bouquet.

It's a truly marvelous invention.

Speaking to WREG, David explained: “It’s just like a dozen roses, except that it has toilet paper. I mean we made toilet paper look pretty, I guess if you can consider that. Like I said, it was just for giggles, you know, to bring some smiles to our community."

But, what initially started out as a joke...

And the orders began flooding in. So, David and the rest of the Blossom team found themselves hastily making and shipping the toilet paper bouquets for the same price as a dozen roses: $75.

People have been sending the bouquets to their loved ones...

Which are proving as a fun and quirky way to lift spirits during the lockdown period.

And you don't need to worry about David running out of toilet paper himself.

Because it turns out that the florist is an avid couponer himself, and has been stocking up for quite some time now.

It's great to see that the company has found a way to benefit from this dire situation.

“It is going to affect our business one way or another, so we’re just trying to, right now, do like everybody and make the best of it," Bart Faulkner explained. For more on the on-going COVID-19 pandemic, keep scrolling to hear about the positive changes it has enforced upon New York City...