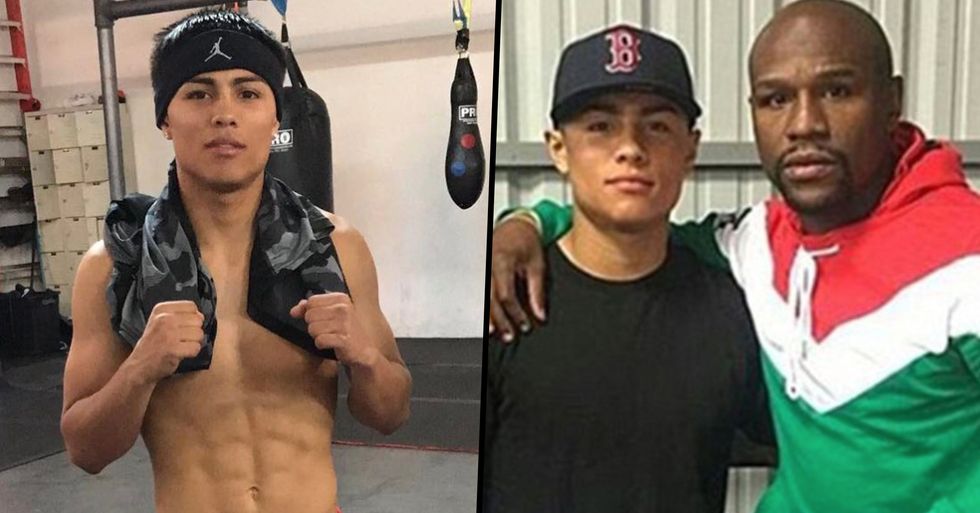 Tragic news has reached us that Floyd Mayweather boxing prodigy Danny Gonzalez has died. He was just twenty-two-years-old.

Up and coming boxer, Danny Gonzalez, has passed away.

The star was just twenty-two-years-old.

His death occurred while he was out on Labor Day...

And has sent shockwaves through the boxing community.

Danny was a true rising star in the boxing profession.

And his big break came just 4 years ago when he caught the eye of former professional boxing star, Floyd Mayweather.

Danny signed with Floyd Mayweather's TMT Promotions when he was only eighteen.

"There are certain times when you know you've just struck gold and this is one of them," Floyd said at the time.

And hailed him a "force to be reckoned with!"

Danny only took 3 professional fights before taking time away from the sport in 2017.

But, he had recently posted on social media alluding to a comeback.

It's clear he was tipped for big things...

And news of his death this week has left the boxing community heartbroken, especially given the awful nature of his death.

Tributes have come pouring in online.

It's clear he mean't so much to so many people.

We are very sad to report the tragic death of boxer and top prospect, Danny González. We send our deepest condolen… https://t.co/ydXAEXRmQp
— Mauricio Sulaiman (@Mauricio Sulaiman)1599583530.0

Today we got news of that Danny Gonzalez was killed ...its extremely sad when we lose our kids💔 Remember to reach o… https://t.co/HwvHSAWjYg
— Delilah Ponce-Rico (@Delilah Ponce-Rico)1599582168.0

Amid all the tributes from fans, family and friends...

More details surrounding Danny's untimely death have since been revealed.

Danny was hanging out in Moreno Valley, CA on Sept. 7 around 9 PM when the incident occurred.

According to reports, someone approached the fighter and opened fire.

The Riverside County Sheriff's Dept. says deputies and paramedics responded to the shooting.

Tragically, Danny was pronounced dead at the scene.

2 people who were allegedly teenagers, who were with Danny at the time, were transported to a nearby hospital.

According to officials, they are being treated for non-life-threatening injuries.

An investigation is currently underway.

So far, no suspects are said to have been identified, with officials also saying they have not determined a motive for the killing.

Our thoughts are with his friends and family at this difficult time. For more on stars we've sadly lost this year, scroll on.