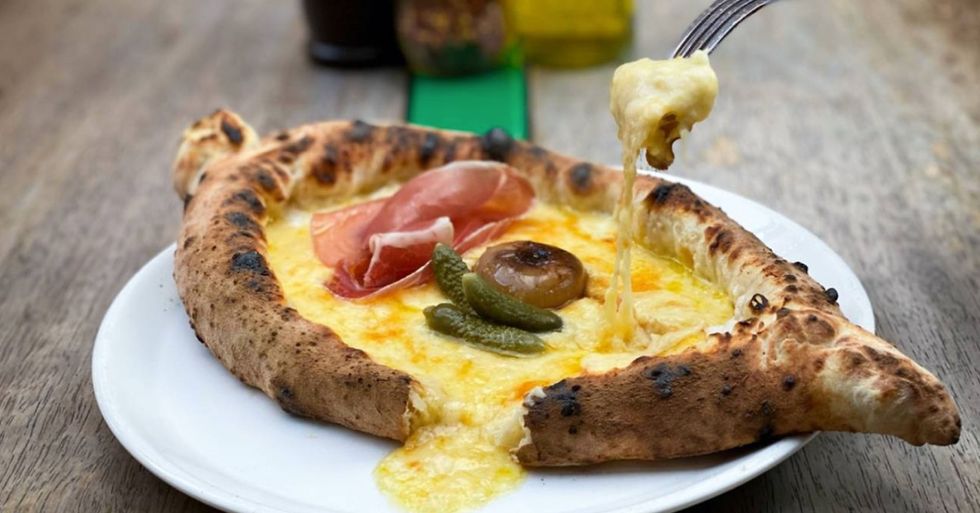 Fondue Pizza Is Now a Thing and It Looks Incredible

What is your go-to pizza topping? This question is responsible for almost half of the world's problems. Some people think it should be a federal crime to order a Hawaiian at a pizza parlor, while others openly discuss their fruity food habits.

One pizzeria, Pizza Pilgrims, has teamed up with The Cheese Bar, and as you can imagine, the results are heavenly.

Keep scrolling to see what made it onto our list of worst toppings, and check out Pizza Pilgrims' new creation...

Don't mind if I fon-due!

Too much corn can really destroy a pizza.

Olives aren't even nice in salads, why would they be nice on a pizza?

Save them for buns please and nothing else.

On a similar note, spam should not be a topping option. End of discussion.

The cheese is the best part of a pizza and this is how you choose to ruin it? No. Just no.

I'm going to move on from this one. This is a joke.

We already have a whole other bunch of vegetables on pizza and now you want to put salad on it?

Or any cream base for that matter...

Including the legs. Yikes.

This is just plain wrong.

And the worst pizza topping has to go to the kiwi.

For those of you too disgusted to go on...

Here is something that'll keep you scrolling for more.

Is it pizza? Is it fondue?

Well actually, it's a little bit of both.

Experts at The Cheese bar have created something beyond our wildest dreams...

via: the cheese bar

The street food traders and Pizza Pilgrims have teamed up to create the melted masterpiece.

The pizza is laden with our favourite cheesy classics.

They have chosen 5 types of cheese including, mozzarella, ricotta, and parmesan, as well as The Cheese Bar’s cornish gouda and kingham.

The cheese is mixed with garlic and white wine... mmm yes please.

When it comes out, as if it couldn't get any better, they top it with prosciutto and pickles.

The raised crust pizza is shaped like a bathtub.

Holding in as much of that cheese as humanly possible. La Fonduta will be available from all Pizza Pilgrims until March the first.

If you've had enough of cheese pizza, and you're in the mood to read more about food combinations that should not exist...

Then just keep scrolling. And please have a sick bucket at hand because some of these are worse than kiwi on pizza.