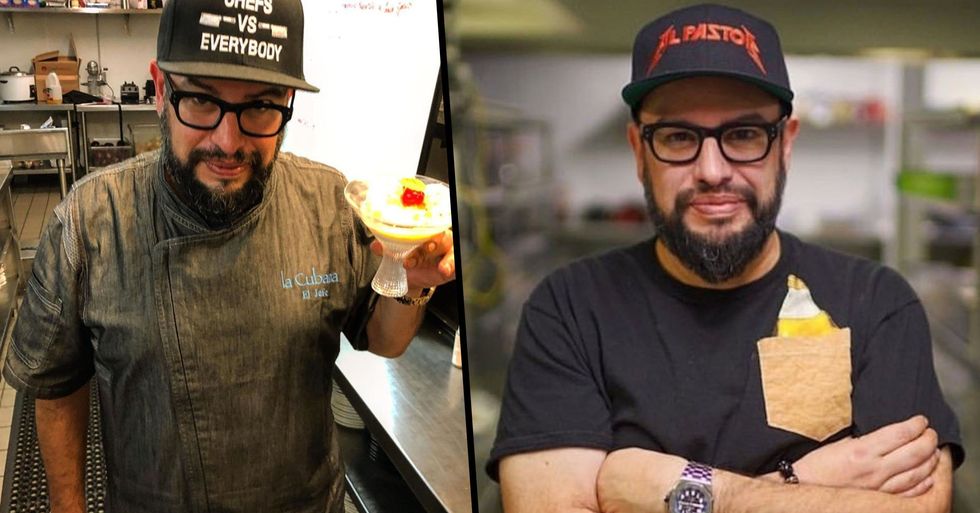 Carl "The Cuban" Ruiz spent his life sharing wonderful food with the world.

Ruiz worked as a chef in some of the most popular restaurants in Manhattan and New Jersey. In 2011, Carl and his wife, Marie, opened their own cafe and deli in Chatham Township, New Jersey, which they called "Marie's Italian Specialties." It was while working on this project, cultivating specialty rustic cuisine, that Ruiz befriended celebrity chef, Guy Fieri. Fieri was so impressed by the kind of dishes Ruiz was creating that he filmed two episodes of his Diners, Drive-Ins, and Dives show at the establishment. Food Network saw potential in Ruiz and his big persona and asked him to judge on several cooking shows, such as Guy's Grocery Games and Guy's Ranch Kitchen.

But fame comes at a cost, right? Sadly, fame led to the breakdown of Carl's marriage to Marie.

Carl's death has come as a massive shock and many people are asking why a forty-four-year-old could be taken so soon without warning...

Continue scrolling for all the details.

The family-orientated 1950s Italian-American vibed deli and cafe opened by Carl and his then-wife, Marie, was a huge success. Both professional chefs, Marie and Carl brought their expertise together to create an authentic Italian American menu, which has been said to have had the best pizza in all of New Jersey.

Ruiz's life was flipped upside down when he met Guy Fieri.

Fieri first came across Marie's Italian Specialities in 2012, when shooting the sixteenth season of his hit show on Food Network, Diners, Drive-Ins, and Dives.  After really digging the vibe of the place and getting on like a house on fire with Carl, he decided to shoot two episodes of the show right there in the deli.

After the episodes featuring Carl aired in 213, Food Network noticed that this guy had a personality for TV. This has led to Ruiz forging out his own television chef career - from starring as a judge on some of Food Network's most popular shows to having guest spots on morning cable, like NBC New York.

Carl had not yet hit "the big time." He was a celebrity chef on the rise. With his new restaurant, Le Cubana, opening in June and with progress in his television career, with more and more appearances scheduled, it seemed as though the future was looking bright for Carl.

Not that fame didn't come with its challenges...

After the breakup of his marriage to Marie, Carl had been inundated with hurtful messages from trolls. It seems as though Instagram commenters thought that Carl was a bad father - but, according to Carl, he doesn't have any children. Surprise, surprise, the trolls seemed to make an error and thought that Marie's extended family were Carl's children - which they were not. This, of course, is not something that he should have had to explain to strangers online... Simon & Garfunkel indeed, Carl.

Bit of an ominous one...

Carl made no illusions of his fast-food lifestyle... from the food pics that he posted on his Instagram to the slogans that he brandished on his t-shirts. Carl was a man who was proud of his unhealthy ways. This made perfect fodder for the internet trolls out to get him. In a screenshot that Carl posted on his Instagram just days before his death, we can see that someone tweeted him saying that he would be dead by forty. Rather ominously (now), Carl responded that he was in fact already forty-four. In light of what's happened, I am not surprised that the above Twitter user has deleted the original tweet. Awkward.

"No matter what you do in life never ever go out quietly. #ruizing"

Flaunting his indulgent lifestyle... the divorcee was often posting on Instagram about his unhealthy lifestyle. Captioning photos of himself drinking in the middle of the day, or as pictured above, smoking two cigarettes in one go, Carl would always use the hashtag "ruizing." As though his unhealthy lifestyle was part of his personal brand.

I swear, from his Instagram feed, it looks as though Carl ate hotdogs every day of the week.

Like this impressive monster, topped with cheese, bacon, griddled onions... is your mouth watering yet?

Most of the time, it seemed like Carl just went for the classic plain hot dog with American mustard.

Two days before he died, Carl posted a review of a microwaved hotdog that he bought on a train. Despite Ruiz considering the hotdog to have been quite possibly the worst one he had ever had, he joked that he would probably get another one.

Hotdogs have got a pretty bad rep.

I mean, it's pretty universally understood that getting a hotdog out and about is a risky move. Carl, it seems, didn't mind taking a risk on his one man mission to try all of the country's hot dogs - good or bad.

Another favorite of the celebrity chef was the all American burger. Just as with the hot dogs, Carl spotted lots of pictures of the burgers that he had tried around the U.S.

Working in a restaurant, though, it can be really difficult not to have food on the brain constantly. I swear, I must have gained like four pounds when I worked as a pizza chef.

Carl will be sorely missed.

One of the first to post about his passing was his good pal and television personality, Matt Parah. Parah acknowledges that Carl lived his life "full throttle" and was never going to grow old and invalid. It seems as though those that knew Carl the best are considering his death an inevitable consequence of his lifestyle choices.

Carl was clearly a good friend to many people.

One guy that tweeted about Carl's passing also made time to express that the late-chef had really helped him out during some tough times.

He lived life to the fullest.

I don’t think I’ve known anyone who lived life to the fullest more than @carlruiz. He was hilarious and exceptional… https://t.co/JJeCSgQ3W9
— Travis Tefft (@Travis Tefft)1569167102.0

As sad as Carl's passing is, it seems those that knew him are taking this time to reflect on the full and exciting life that he lived.

The outpouring of sadness following the loss of Carl is seriously overwhelming. So many people have such good things to say about him. By all accounts, he was a genuinely nice guy. And, although his life may have been cut short, it seems his legacy will live on in those whose lives he touched... even if that legacy just means leaving pineapple off the pizza!

"You taught us to live every moment to the fullest."

Carl's live fast, die young attitude certainly had an effect on those around him.

Guy Fieri, who made Carl a star, was heartbroken by the news.

The Food Network chef took to Twitter to post about his sadness at the loss of his good friend. Fieri expressed that he was lost for words trying to describe how great of a person Carl was. Says it all really, doesn't it?

One Twitter user took to the social networking site to profess her deep regret in not getting around to hanging out with the much-loved chef, who had apparently propositioned her many times. It's moments like these that make us reflect, and it's difficult to think that you wished you had done things differently.

Carl will surely be frying up a storm in heaven.

If God didn't know what diabetes was before, he certainly will very soon!

La Cabana issued a statement following the news of Carl's passing, stating that they were going to set up a scholarship program in his name.

In a post about the celebrity chef's tragic passing, they expressed that they want to maintain the Cuban roots of the restaurant and that "to honor the work you loved so much Chef, La Cubana will continue your work in establishing The Carl Ruiz Scholarship Foundation for aspiring chefs." They ended the post by saying: "We love you! You are already missed. Rest easy" - a sentiment that I think many people are carrying with them today. Continue scrolling to read about all of the other tragic celebrity deaths of 2019. I had no idea about some of them!