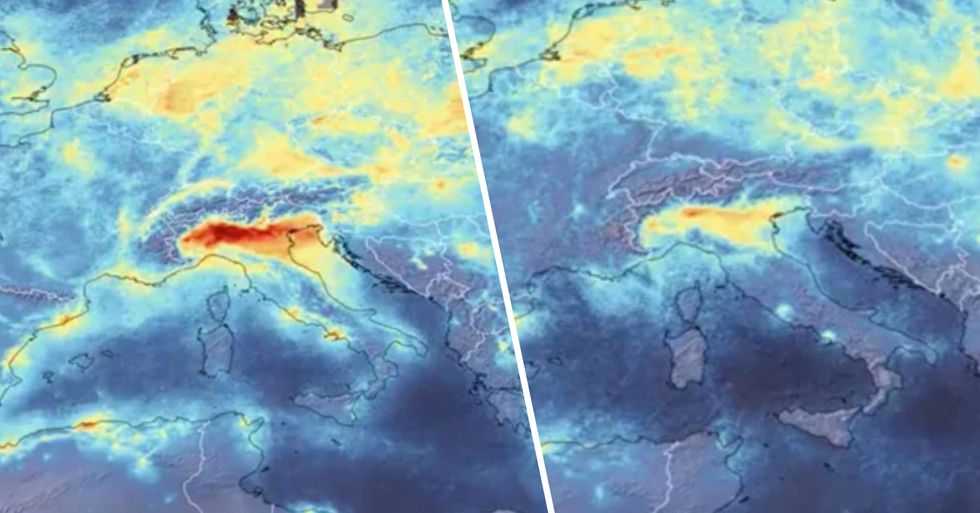 Italy has been in a complete lockdown for a week now due to the outbreak and recent images show the huge decline in pollution since the country announced this lockdown.

Italy has been left deserted for the last week...

And its empty streets aren't the only eery thing about this lockdown.

Satellite images have been released...

The European Space Agency has released a "before and after" animation satellite image from Europe to highlight the changes since the lockdown was put in place.

The satellite imagery is from the last few months...

The animated imagery, which is based on data from the Copernicus Sentinel-5P satellite, shows the decline in air pollution over Italy between the 1st of January and the 11th of March 2020, specifically nitrogen dioxide emissions.

The reduction in pollution is highly evident...

And in a press release, the European Space Agency noted how the reduction was particularly visible in northern Italy, which "coincides with its nationwide lockdown to prevent the spread of the coronavirus."

Experts are convinced the drop in pollution has been caused by the lack of human beings...

Copernicus Sentinel-5P mission manager Claus Zehner said, "The decline in nitrogen dioxide emissions over the Po Valley in northern Italy is particularly evident. Although there could be slight variations in the data due to cloud cover and changing weather, we are very confident that the reduction in emissions that we can see coincides with the lockdown in Italy, causing less traffic and industrial activities."

These images are incredibly accurate...

You can watch the fascinating footage here...

For more on the coronavirus pandemic, keep scrolling to learn about the brothers who hoarded 17,700 bottles of hand sanitizer...
40%