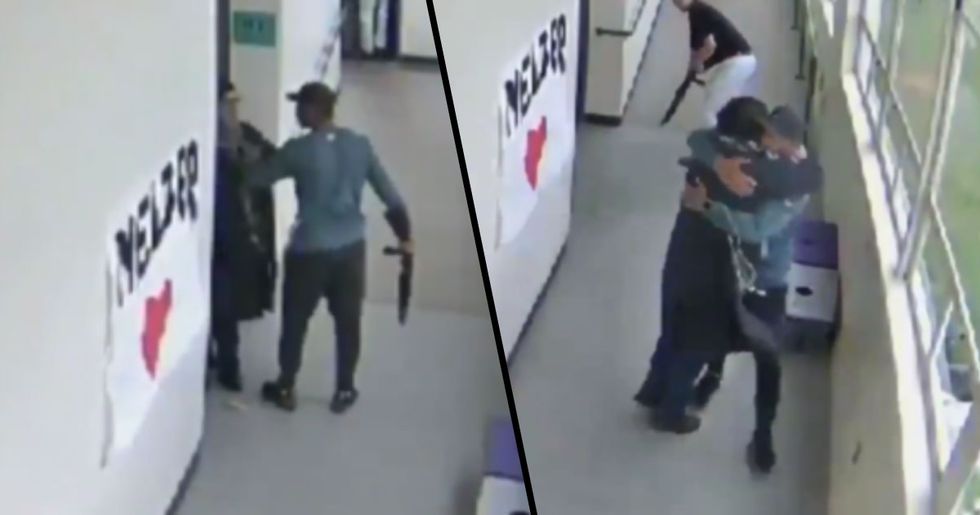 Somehow, access to guns and automatic weapons in our country is still as easy as ever, despite the thousands of innocent lives lost over the years due to mass shootings.

There have been too many school shootings here in the United States, yet the government refuses to acknowledge the fact that our gun laws are out of control and are completely unnecessary.

A high school in Oregon experienced a very close call recently after a student armed with a loaded shotgun was roaming the hallways, but a brave football coach managed to disarm him by simply hugging him.

Keep scrolling to learn more about this story and to witness the shocking CCTV footage...

School shootings have become a devastating part of the American psyche.

Since the Columbine shooting in 1999 that saw 2 boys murder twelve students and 1 teacher before committing suicide, a series of mass murders were to follow over the years, spreading devastation across the entire country.

The number of mass shootings since Columbine is scarily high.

And the majority of these shootings have sadly taken place in schools at the hands of students struggling with mental health problems, and it is astounding how these young people were able to gain access to guns.

The government has failed for years to make a change to gun laws in our country.

Other countries that have suffered from mass shootings made immediate changes to their laws, such as New Zealand's decision to ban military-style weapons earlier this year a month after fifty people were killed in 2 mass shootings in mosques in the city of Christchurch.

The lack of gun laws in our country has lead to too many deaths.

Statistics found that there have been at least 2,264 mass shootings since the Sandy Hook elementary school shooting in 2012 that claimed the lives of twenty-six children and teachers. 2,561 Americans have died from mass shootings, yet our government continues to allow access to guns and automatic weapons.

What will be considered enough to change these laws?

It seems as if the government is more interested in making money from gun trade rather than saving the lives of their people.

Mass shootings will continue to happen as long as guns are accessible.

And a high school in Oregon recently experienced this high probability.

Parkrose High School in Oregon was attended by nineteen-year-old Angel Granados-Diaz, and in May of this year, reports came in that the teenager came to school armed with a shotgun.

It was reported that students began running and screaming from the building on May 17th.

The high school released the CCTV footage last week, and the footage shows the moment when Granados-Diaz steps out into the hall after walking into the school's football coach, Keaton Lowe.

2 teachers are seen to be using their radios and running away from the boy...

The twenty-seven-year-old coach intervened by gently taking the weapon from the teenager and backing towards the wall, using his body and arms in an embrace position.

Another teacher comes around the corner and quickly takes action.

As Lowe is continuing to embrace the troubled student whilst holding the weapon in one hand, another teacher quietly but quickly approaches to try and take the weapon from the coach.

The other teacher manages to remove the weapon safely from the student.

Lowe continues to hug Granados-Diaz, and the teenager eventually hugs the coach back and holds onto him while the weapon is safely removed.

Granados-Diaz was eighteen when he entered his school with the weapon.

Investigators believed that he was suffering a mental health crisis at the time and brought the gun - which was only loaded with one bullet - into school with the intention of taking his own life after splitting up with his girlfriend.

The police found that he had no intention of harming anybody else.

A lawyer for Granados-Diaz claimed the teenager thought about ending his life in a bathroom at the school but went into a classroom so that 911 would be called after shots were fired. He didn't want to take his own life at home as his mom would have been the one to find him, further reports said.

It was an extremely emotional moment for both the student and the teacher.

via: University of Oregon

In an interview following the incident, Mr. Lowe, who is head football and track coach at the school, said he had a few moments with the teenager before police arrived. "It was emotional for him, it was emotional for me. In that time, I felt compassion for him."

The coach used initiative and courage.

"The universe works in crazy ways so I just happened to be in that same classroom," he said.

"I was within arm's length of him so it happened fast and I was able to get to him, so I'm lucky in that way."

When he realized it was a real gun, his instincts took over.

Lowe has worked as the football and track coach at Parkrose for a year now.

In a tweet after the incident, he wrote that he had had no idea, that he would have to put his life on the line for one of his students.

He added: "When confronted with the test the universe presented me with, I didn't see any other choice but to act. Thank God, I passed. I've spent the last 24 hours being more appreciative of my family and realizing we have a serious problem."

Lowe has acknowledged the problem our country has with gun violence.

"I'm blessed to be alive and extremely happy that the students are safe. I'm not sure what's next, I haven't had the time to really think about it. But I am sure I want to be a part of the solution to school gun violence," he went on to say on Twitter.

Lowe has been hailed a hero.

An Oregon high school football coach was able to disarm a student with a shotgun preventing a possible massacre by… https://t.co/XgjmJzSBcJ
— StanceGrounded (@StanceGrounded)1571517077.0

His brave actions saved a life and if it wasn't for the heroic coach, Granados-Diaz may have been successful in taking his own life.

While the teenager didn't actually fire the weapon, he has been given a probationary sentence.

Granados-Diaz was given a 3-year probationary sentence on Thursday after pleading guilty to felony possession of a firearm in a public building and misdemeanor possession of a loaded firearm in public. He will also receive mental health treatment as a part of his sentence. Watch Lowe's exclusive interview with Daily Mail TV here...