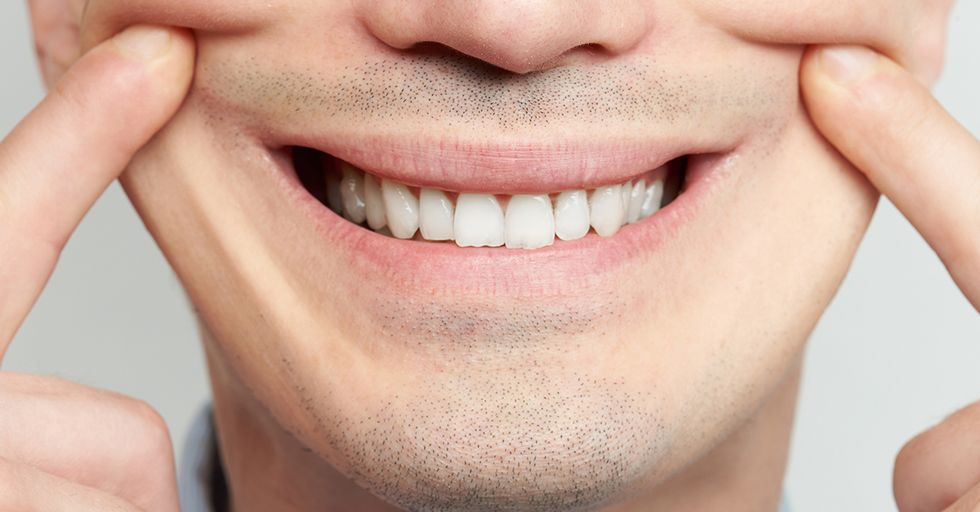 Forcing Yourself To Smile At Work Can Lead To Heavy Drinking, Study Says

Let's lay down some basic facts: every adult has to have a job, because jobs give them money, and as much as we all may hate it, we need money to survive. But that need to make some scratch shouldn't come at the expense of our physical wellbeing, should it?

A new study suggests that it might. A team of researchers have found a link between putting on a fake smile at work and then going home and drinking. That means there is now scientific evidence that having employers tell their employees to be happy at all costs is causing them the kind of psychological harm that leads to alcohol abuse.

How should the customer-facing workers of the world respond to this revelation? And what should employers do to not only demonstrate that they care about their employees, but also to make their businesses run better? Well, we've got some ideas...

As anyone who's ever taken Psych 101 already knows, suppressing negative emotions is about the most unhealthy thing you can do.

And I definitely already knew how unhealthy it is to suppress negative emotions since I've taken Psych 101 three times because I failed the first two.

When something upsets us, it's our job to find a healthy way to express that feeling.

Otherwise, it sits inside us and rots. And one of the ways to make it rot even faster is to tell yourself that that feeling isn't there, that we're not actually upset and are actually happy.

Lies are the fertilizer that help negative emotions grow.

It's one thing to feel angry, sad, or afraid, but to feel them and pretend you don't? That's what gives those feelings their power. If we don't acknowledge and process them, we start acting like out of control lunatics without even knowing why.

And the king of emotional suppression? Why, that would be alcohol.

All hail the king! (Actually, don't. Don't hail this king at all. It is a bad king. Pour it all down the drain if you can.)

It should come as no surprise then that researchers have found a link between forcing a smile at work and heavy drinking at home.

Researchers at Penn State and the University at Buffalo, by way of Penn State News, found the connection between fake smiles and real drinks. Penn State psychology professor Alicia Grandey said of the study, "Faking and suppressing emotions ... was related to drinking beyond the stress of the job or feeling negatively."

And who's forced to smile at work?

Actually, it's the folks at customer service jobs.

Most restaurants and retail stores have some sort of "service with a smile" policy, which ensures that, when its employees take your order or ring you up, they are positively beaming (whether they want to or not).

Customer service jobs are the worst.

For that reason and, honestly, many others, working with customers is a special kind of hell. I've heard a lot of waiters and waitresses say everyone should be forced to serve two years in a restaurant themselves so they would never again yell at their own waitresses, and it's not a bad idea.

Most retail workers are masters of the fake smile.

You have to be ready to perk up when a monstrous person walks into your store and decides to unleash. They must wear it like armor, so their feelings can never be used to hurt them.

Too often, people take out their negative emotions on customer service employees.

Remember when we said it was up to us to find healthy ways to let out our negative feelings? Yeah, yelling at the guy at Chipotle because he gave you a light scoop of chicken isn't one of them.

As though those employees aren't human beings with feelings.

The things we say to customer service professionals are still capable of cutting them to their core. And while people who deal with customers all day probably already know this, it still can't hurt to be reminded that terrible customers are terrible because of their own insecurities, not because the person behind the counter did anything wrong.

And store employees have it the worst.

Here's the secret to being a kind shopper: never ask an employee if they have anything "in the back." They don't. There is nothing for sale "in the back." The only thing that is "in the back" is a small desk where the manager makes the schedule and an old coat that's been there forever that every employee says isn't theirs.

Certainly, they'd all love to tell off every annoying customer.

How good would it feel to just unleash on these people? To tell them how rude, selfish, myopic, and sad they are? My god, it's the retail workers' dream.

These employees just have to take the abuse without saying a word back. And there you have it — those are the negative feelings that their job literally demands they suppress.

So, according to this study, the employees who feel this loss of control are more likely to go home and drink.

The working theory is, when you use up all your self-control keeping your mouth shut when a customer yells at you for bringing him his steak medium rare instead of light medium rare, you don't have any elf-control left at the end of the day to hold off on drinking.

Which for sure makes everything better.

As we all know, when you use alcohol to suppress your emotions, things get better all the time forever and no one — not your wife, children, or friends — develop any negative consequences ever! Hooray!

It turns out, a lot of people use alcohol not so much to feel good...

Even though it has a reputation for making a party come alive, not everyone uses alcohol just to lighten up and get out on the dance floor.

... but to control their emotions.

"It wasn't just feeling badly that makes them reach for a drink," Alicia Grandey said. "Instead, the more they have to control negative emotions at work, the less they are able to control their alcohol intake after work."

So now you can tell off those awful customers!

All you baristas officially have permission to scream at that guy who comes into your coffee shop, sets up shop with his laptop and phone charger in the corner, declines to order anything, and watches movies without headphones.

And when your boss confronts you about it...

And they will. Bosses love confrontations. It's why they became bosses — when all you're good at is confronting people, you have to find a way to make money doing it.

... You can say you're doing your part to fight alcoholism.

If you print out a copy of the Penn State/ Buffalo study as evidence, you can slide it across your bosses' desk to show that you had to unleash on that rotten customer, or you'd basically be drinking on the job.

You will definitely be fired.

But when it comes right down to it, is a job that doesn't let you unleash on rotten customers really worth your time?

But if employers really cared about their employees...

And we have to assume they do. If we let the dark thought that the American economy is built on upper management types callously taking advantage of their employees, well, we'd never be able to buy another product again.

What if — and stick with me here — we didn't require customer service professionals to be total subservient lackeys to customers? What if we treated that relationship as equal, so one side didn't have to go home and pound shots to get by?

(It's not like customers who are being d-bags can't tell the employees are lying through their teeth anyway.)

I would much rather have my waiter yell at me than lie to me. At least if they escalate, I can escalate back, and then we can both get out all our negative feelings and then go home and pour our Smirnoff handle into the sink.

Because customer service jobs are still done by people.

It can be hard to remember, but customer service professionals live their own lives, complete with their own thoughts and feelings and hopes and fears. In other words, they exist. Even when you're not buying things from them.

And this "customer is always right" business...

Which is, officially, the biggest pile I've ever heard. Customers are the dumbest people alive! They're very rarely right! They think "the back" is a magic land where stores keep their heart's every desire.

We deserve to respond in kind to the monsters who attack us...

To a certain extent, people need to express their authentic selves. When someone hurts us, it's unhealthy to not only pretend we're not hurt, but also that we're actually happy they came into our store to hurt us.

If your humanity is trampled on by another person's status as a customer? Well, I can see why that might lead someone to drink.