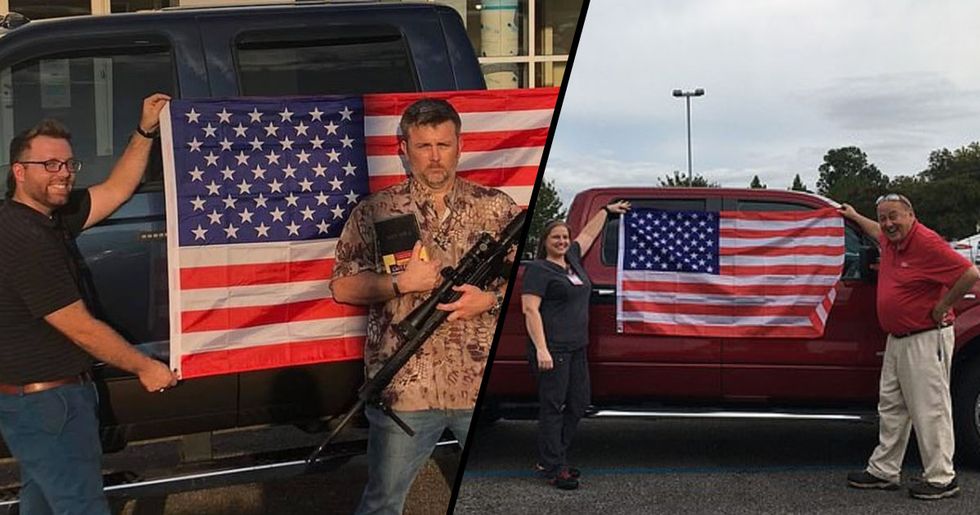 Ford Dealership Offers a Free Bible, American Flag, and $400 off an Assault Rifle With Every Car Bought

Yeah... America the brave, America the fearless, America the nation wherein guns somehow signify patriotism... At least that's what a Ford dealership in South Carolina seems to believe. The car dealership has made headlines for a new promotional deal that they are currently having. They're calling it the "'God, Guns, and America’ incentive," and are saying that it is a "patriotic package." It's interesting that we all seem to have a different idea of what represents patriotism, isn't it?

Continue scrolling to read about what this dealership is going on about.

The Ford car dealership has thought up an inventive way to draw in customers.

We all know that guns are popular in the south, and this has never been clearer than in the news that a car dealership in South Carolina has decided that a great way to drum up customers would be by offering guns, bibles, and U.S. flags with every purchase.

"Would you like an AR-15-style rifle with that purchase?"

In these turbulent political times, the Ford dealership thought that an incentive package that celebrated everything American would go down a storm.

I'm not sure that it's a package suitable for all customers.

I mean, you go to the dealership to buy a family carrier and you walk away with a weapon of mass destruction? Riiight.

Clearly, there's a market for it...

After announcing the incentive on their Facebook page, many people took to the page to commend the dealership on their idea.

There were also those that condemned it.

It seems as though we will forever be a divided nation when it comes to guns. There were certainly a fair few people out there that considered that offering customers a $400 voucher to purchase a Smith & Wesson AR-15-style rifle from the local gun store, Locked N Loaded, was a dangerous thing to do.

We are a nation divided.

This is no plainer to see than in stories like this.

Trump's America is not everyone's America.

The land of the free certainly means something different to everyone.

It's good to be proud of where you come from, but something that has become confused under the Trump administration is the notion that America is a melting pot of different cultures, ideas, and perspectives. The idea that guns, Bibles, and American flags are what unites us is a delusional concept.

Tensions in the U.S. are rife.

I mean, is anyone surprised? How can we not feel a little tense with an administration that makes impulsive decisions quicker than they can remove one of Trump's most vile tweets? We've had way too many mass shootings this year (any number of mass shootings is too many) and most of them were racially motivated and, with a president who seems determined to turn neighbors on neighbors and car dealerships giving away guns like we're living in some kind of apocalyptic state, it seems almost inevitable that we'll have more.

For such a supposedly God-fearing nation, we sure don't seem to be treating human life with much respect nowadays. In defense of the dealership, General Manager, Derrick Hughes, told WYFF: "We are all country folk, God-fearing people. We are very patriotic people, believe in our country and salute our military."

Obama believed in a different kind of patriotism.

Barack Obama envisaged an America built on love, duty, and charity. For him, patriotism meant an America for everyone. Vox reported on how, late last Friday, Trump signed a proclamation that will come into effect on November 3rd. The proclamation in question will "quietly cut legal immigration by up to 65%." Didn't you hear about it? Well, I guess he didn't think that it was worth a tweet. It will only affect the families of thousands of American citizens, hundreds of thousands even. It is a bid to eradicate "chain migration," making it harder for immigrants to move to America who already have family living here. I mean, isn't that how everyone ended up in America?

Trump wants the kingdom all to himself.

The president seems to have this delusional idea that there is an us and them situation between white Americans and everyone else. This was evident when he called out the female congresswomen that were unhappy with the treatment of people thrown into ICE centers. He tweeted telling them to go back to their own countries... despite the fact that all bar one of the women in question were born in the U.S.

AOC was one of the congresswomen that Trump has targetted.

Born and bred in the Bronx, Alexandria Ocasio-Cortez is now the congress representative for her hometown. This is not something that Trump appreciates, nor does he appreciate how AOC calls out his wrongdoings and is favorable with the public. A threat and she's from Latino heritage? Must be a "wacko," eh, Trump?

Trump has a delusional idea of America.

He must think that the U.S., at its core, is one giant golf course full of white men. Oh, and Melania, of course... but she doesn't count.

Maybe Trump should spend an afternoon with Alexandria Ocasio-Cortez and learn about what loving your country is really all about. That'd be a more efficient use of his time than berating her on Twitter.

I mean, I guess a free Bible causes no harm...

Although, really, it is pretty exclusive to Christian worshippers. Is it acceptable for a car dealership to promote one religion over another? Considering that this was a deal made to supposedly bring customers in, why would they be so selective?

The deal is clearly aimed at right-wing folk...

Do you love guns? Do you love the Bible? Do you want an all-American motor? Then come and see us! I think that this Twitter user was right in suggesting that the stereotype to draw in the right-wingers is pretty crude but, eh, enough of them seem to be lapping it up.

Christmas came early for some...

For those that perfectly fitted the stereotype of the God-fearing, gun-loving right-wingers, this deal is great! Maybe somewhere there is a car dealership that is giving away bike lights, burritos, and Brockhampton CDs...

It's no surprise that the incentive has put some people off.

It was a risky move. Surprise, surprise some people aren't so keen on getting a car at a dealership that gives away guns.

@arneduncan As an Australian I’ve never understood the link between guns, Jesus and patriotism in the US.
— sladl (@sladl)1570584081.0

But why does everyone think that we have any idea what's going on? Just because we're American doesn't mean that we can explain why some people want to run around with flag capes, brandishing guns, saying everything they do is in the name of God and our country.

...And all the weird and wonderful characters we have in our great nation. Continue scrolling to understand why guns are so unpopular with some of us.