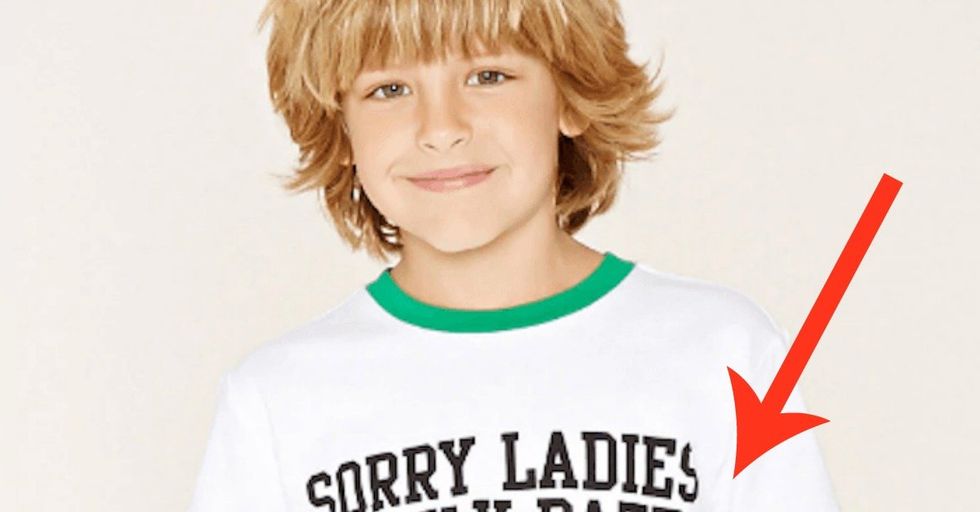 You would think that clothing company Forever 21 would have learned that T-shirt ideas should probably go through someone older than say, the age of 21, before being put up for sale on their website for the whole world to see.

Earlier this year they came under fire for a male T-shirt that appeared to reinforce rape culture, one they quickly took off of their website.

One of the mind-boggling things about this is that several people at Forever 21 looked at that and went, "Yeah that's a good idea."

But Forever 21 haven't exactly been known for their good ideas as of late.

They've also been accused of pushing a religious agenda both through T-shirts with sayings such as “Jesus Loves You," and tons of cross imagery.

And even through printing the bible verse number 3:16 on the bottom of its bags, which correlates to the verse from the bible that reads, "For God so loved the world, as to give his only begotten Son; that whosoever believeth in him, may not perish, but may have life everlasting. ... For God so loved the world that he gave his one and only Son, that whoever believes in him shall not perish but have eternal life."

More recently, they caught major flack for printing a girls' top that read, "Allergic To Algebra" which many agreed was a terrible message to send young women.

To be fair, I too am allergic to Algebra, but that's probably not the message we should send other young ladies.

As I said, you think they would've learned...

The latest batch of shirts offered online for boys are receiving backlash for being sexist, suggestive, and enforcing gender stereotypes.

It's ironic because he's probably so young he doesn't even like girls yet. Har har.

“It is completely inappropriate for companies to sell those shirts to young boys," University of Kentucky professor of psychology and author Christia Spears Brown said. “Even I am pretty shocked by those, and little shocks me these days."

“It sexualizes children at an age when they should not be sexualized," Spears Brown continued. “It reinforces a harmful stereotype about boys that says their value and worth is dependent on how many girls or women they can ‘conquer.’"

People took particular offense to the "I Only Date Models" shirt.

"This has a ripple effect that can harm boys, both gay and straight, as well as girls. It indirectly says that girls are only for sexual attention and not for friendship. Anything that says that only models are worthy of attention is never positive for girls," Spears Brown said.

After everyone started freaking out, Forever 21 pulled the shirts from their website.

They even issued an apology, but people weren't buying it.

“Forever 21 takes feedback and product concerns very seriously," they said. “With regards to the T-shirts in question, after receiving feedback we have taken immediate action to have them removed from our website. We sincerely apologize to anyone who was offended by the products."

People were glad they removed the tacky tees from the site, but...

For some people, it was too little, too late.

Or anything from Forever 21.

Maybe they should spend more money on research and development than they probably do putting together a social media crisis command center to put out fires every couple of months.

$49.98 $24.99
Buy Now
See More Deals
We hope you find these deals as awesome as we do! Just an FYI: we may receive a share of sales from links on this page