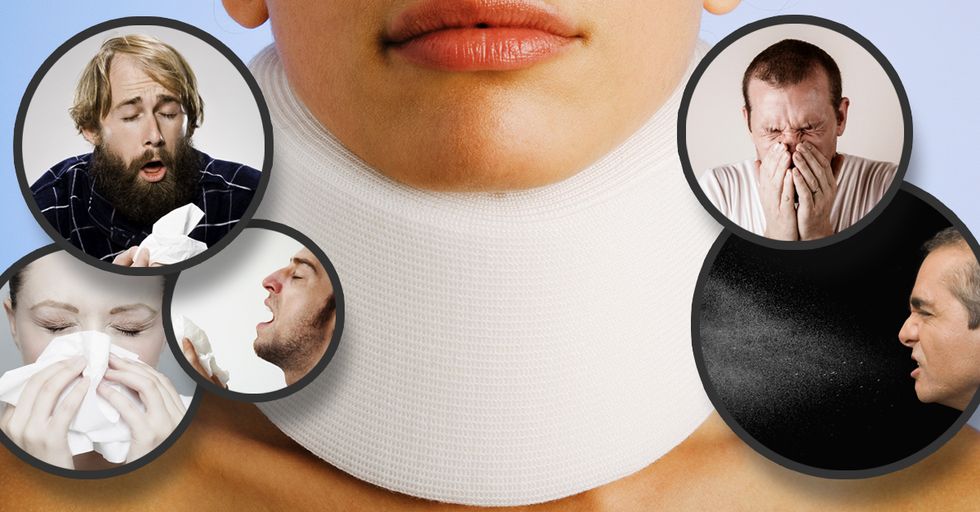 Forget Politeness: How Holding in a Sneeze Could Blow a Hole in Your Throat

The human body is all kinds of weird.

Between all the cracking joints and gurgling stomachs, your body is a veritable orchestra of unconventional instruments just lying in wait until they can work together to embarrass you. Take, for example, the sneeze.

It's possible to have a dainty sneeze, but those never come around when you're in an otherwise silent room full of people. No, it's at those moments that your most cacophonous, bombastic sneezes assault your nose, and you're left in a room that used to be empty but is now filled with the echo of your sneeze and about 1,000 people saying "bless you."

It can be tempting to plug your nose and hold your sneeze in. But as I just learned today, you should never, ever do that.

The average sneeze travels at about 100 miles per hour.

It's kind of amazing that tissues work at all when you think about the speed your sneeze is traveling, right? A good sneeze can feel great, but they don't always come at the most opportune times.
That's why so many people get into the habit of holding their noses to keep themselves from sneezing. The resultant sound is also weird, but at least you didn't get your nasal fluids all over the place, right?

Well, as it turns out, you really shouldn't be holding your nose when you sneeze at all.

A recent case study reported the experience of one man in the U.K. who decided to hold his nose and close his mouth in order to suppress a sneeze. As he soon learned, though, that was a horrible decision.

He instantly felt a painful, popping sensation in his throat. He headed to the ER, and by the time he got there he had lost his voice and was barely able to swallow.

When the doctors examined him, they heard a strange crackling sound all the way from his neck to his rib cage. The doctors decided to take a closer look at his throat...

...Where they discovered A HOLE.

Yes, that's right. A literal, actual hole. In his pharynx. (That's the membrane-lined cavity right at the back of your throat, although I would say that the actual location of said hole doesn't matter quite so much as the fact that the man blew a hole in his throat from SNEEZING.) As it turns out, the crackling sound was caused by air bubbles rubbing against the soft tissues of his neck. Because of the hole. In his pharynx.

Luckily, the guy made a full recovery after about a week of being prescribed precautionary antibiotics and being put on a feeding tube.

Doctors then discharged him with very specific instructions to never try to hold back another sneeze in his life. (As if he needed a doctor to tell him that.)

The case study also said that a ruptured pharynx isn't the only danger you might face if you hold in sneezes.

Held-in sneezing has also resulted in burst eardrums and ruptured blood vessels in the brain. Yeah. Pretty scary stuff. Obviously, these issues are not the norm when it comes to sneezing, but when it comes down to it, you don't want to suffer an injury from a sneeze, right?
Now, please understand — I'm not telling you this story to freak you out about sneezing for the rest of your life. (Although I'd be lying if I said I hadn't been thinking about this story every single time I sneezed today.)
Rather, I want to empower you to not be ashamed of your sneezes. Don't try to hide them. Let those babies rip! (But maybe grab a tissue first.)
20%