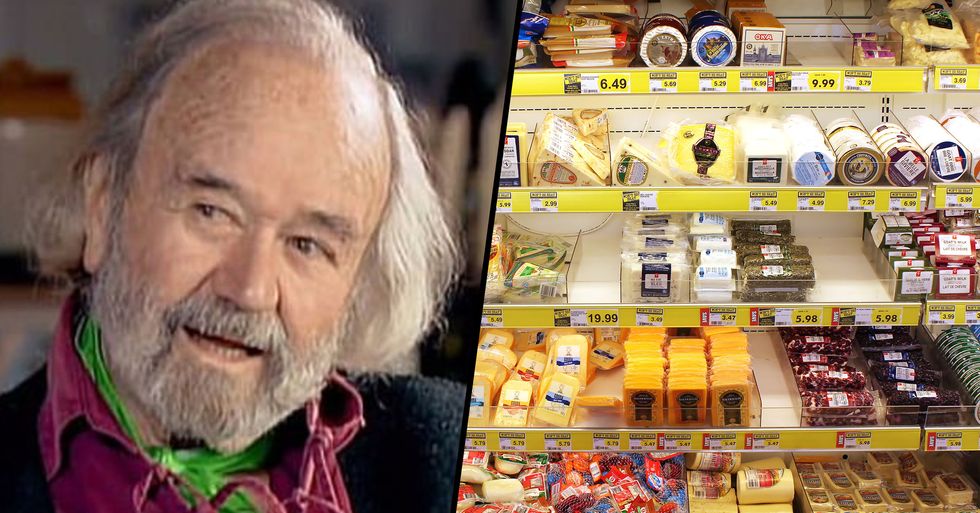 A former brand ambassador for a popular cheese has slammed the "ridiculous" move to change the name following the backlash about racist ideologies.

We are living in the era of change.

The Black Lives Matter movement is gaining traction like never before, with millions of people having protested racial injustice and equality over the last few months.

Racially-motivated police brutality has been happening for centuries now...

But the horrifying death of George Floyd sparked an outrage like never before.

But, remarkably, these protests have been working.

The Black Lives Matter movement has been dominating global headlines, and it has completely taken over social media.

Companies, brands, and musical groups have been changing their names amid the movement, too.

Remember when the Dixie Chicks announced that they would be dropping "Dixie" from their name as a result of the racist connotations surrounding the word?

And now, a cheese company has followed suit...

After years of calls for a much-needed name change.

The infamous cheese company was recently catapulted into the spotlight...

After a customer shared the issues surrounding their problematic brand name amid the Black Lives Matter protests.

Well, their name just so happens to be a slur that has been used to oppress minority groups for decades.

But the reasons for the brand's name didn't actually start with racist intentions.

The company's name was actually kept in homage to its creator; a man from Philadelphia,  Edward William Coon, who discovered a groundbreaking method to make cheese more flavourful while avoiding “rind rot", which often spoiled cheeses over time.

But a viral post sent the debate into a wild frenzy.

The Australian brand, which was named "Coon", was thrust into the spotlight after its name lines up with a slur used to degrade Aboriginal people.

The historical roots of the word are blatantly negative...

But others have been arguing that it was named after a man as opposed to those roots.

Twitter user Josh Thomas asked: "Hey Australia - are we still chill with this?"

Responses flooded in as the post went viral in a matter of days.

Some users agreed that it should be changed.

Lots of Aboriginal people commented on how the word is used to taunt them and make their lives a living hell.

But others thought of it as a step too far...

@ScepticalAussie @JoshThomas87 Um, because 'Smith' hasn't been used a a derogatory word for hundreds of years. Just a thought.
— Sarah Breen (@Sarah Breen)1592127544.0

And, of course, these people were quickly called out for their poor defense.

However, Saputo, Coon Cheese's Canadian sister-company, has evidently been moved by the backlash...

Because last week, they announced that they will finally be retiring their brand name.

Saputo responded to the request to change the name...

In a statement, CEO, Lino Saputo Jr, said: "We performed a careful and diligent review of this sensitive situation. We wanted to ensure we listened to all the concerns surrounding the COON brand name, while also considering comments from consumers who cherish the brand and recognize the origin of its founder, Edward William Coon, which they feel connected to."

But, evidently, these sentimental roots were not enough.

He continued: "After thorough consideration, Saputo has decided to retire the COON brand name. As part of this process of transformation, we commit to keep our stakeholders informed as we move forward."

A new brand name is yet to be decided...

But, already, people are very excited about a new era of racially appropriate cheese names.

It doesn't come as a surprise to learn that not everyone agrees with this name change.

And one of the company's former ambassadors has spoken out about his opinion over the name change.

Pioneering Australian TV chef, Peter Russell-Clarke has slammed the name change and he has branded it as "ridiculous", according to the Daily Mail Australia.

"Are we going to change the name of the raccoon, do you think? Should we cut off the beaks of cockatoos to make sure the black beaks aren't offensive to the white of the cockatoo?"

He then said that Coon's owners should be more concerned about maintaining the quality of their cheese...

Rather than ditching an eighty-five-year-old name to "suit the whim of the time."

The TV chef doesn't see the problem, at all.

He then joked that political correctness was now affecting his home cooking in isolation.

"I make sure that I don't burn any food because if it turns black then I'd have to be worried."

@thetopjob Does this mean we're cancelling Peter Russell Clarke? I think I can live with that. https://t.co/OfvsqVJApr
— Byron Rothschild (@Byron Rothschild)1595597596.0

And people are clearly disgusted by the former brand ambassador's narrow-minded views.

But whether Peter likes it or not, the brand is changing...

@thetopjob Does this mean we're cancelling Peter Russell Clarke? I think I can live with that. https://t.co/OfvsqVJApr
— Byron Rothschild (@Byron Rothschild)1595597596.0

And there's nothing he and his ignorant views can do about it! Read on to learn about the Aunt Jemima fiasco...