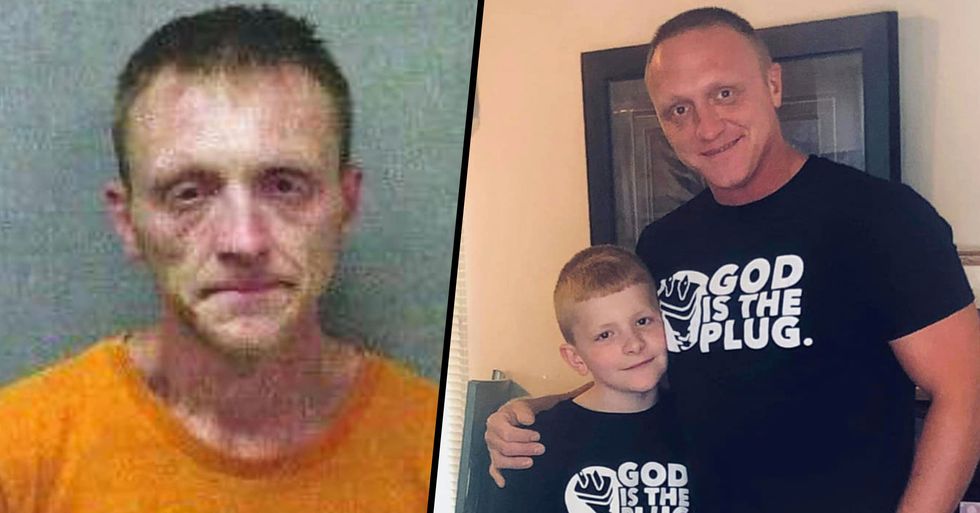 Former Drug Addict Shares Incredible 'Before and After' Pics

The effects of drug addiction are truly life-destroying and there are millions of people out there who battle and suffer from these types of addictions.

It really isn't as simple as it seems for people to simply quit their addictions and turn their lives around, and it is a sad reality that the majority of these individuals face lose their lives to their habits.

A former drug addict has shared some incredible "before and after" pics and the transformation is truly amazing.

Drug addiction is no joke.

Drugs are chemicals that affect the body and brain. The effects that they leave on the body and mind can be long-lasting and completely life-destroying.

There are more drug addicts out there than one would expect...

According to the Gateway Foundation, more than 7 million people in the US suffer from an illicit drug disorder, and one in 4 deaths results from illicit drug use.

Drug-related illnesses are one of the most common health issues...

In fact, more deaths, illnesses, and disabilities are associated with drug abuse than any other preventable health condition.

Drug use also has a massive effect on behavior...

It is no secret that drug addicts have a noticeable change in personality and behavior. Substance use disorders have effects such as paranoia, aggressiveness, violence, impulsiveness, and a lack of self-control.

These behaviors can lead to severe consequences...

People who suffer from drug addictions can begin to slack in both their personal and professional lives, losing friendships, relationships, family members, and even jobs along the way.

This will often result in homelessness...

There are approximately 600,000 homeless people here in the United States, and The National Coalition for the Homeless found that twenty-six-percent are dependent on harmful substances.

A lot of homeless people turn to drink and drugs to blot out the reality of living on the streets.

Mark Johnson, a British author who used to be homeless and a drug addict, wrote in his column for The Guardian that giving homeless people food over money is no help at all. "One woman, who feared that by giving money to a homeless man she was banging another nail in his coffin, recently told me that she had instead given him an apple. I replied that he didn't need an apple; he almost certainly needed drink or drugs to blot out the reality of living on the streets – which is unhealthy, dangerous and frightening – as well as to help him forget the reasons he's there. No one is homeless by choice."

This has a devastating impact on families...

Many families are unfortunate enough to watch their loved ones decline at the hands of drug abuse and addiction, and despite many efforts, it is sadly found by family and friends that there isn't much that they can do for severe addicts.

It takes a lot of courage to ask for help...

But individuals who have reached out can easily say they have no regrets in making this huge lifestyle change.

Jason Wickline is one of these people...

Jason, who is from West Virginia, is a former drug addict who is still on his path to recovery.

Just a few years ago, Jason was on a downward spiral...

Alongside using the substances, the dad was eventually arrested for manufacturing drugs before they would be distributed.

His son, Krystian, was taken into Child Protective Services...

And the poor little boy thought he would never see his dad again.

This was a turning point for Jason, however...

"I struggled with drugs most of my adult life (seventeen years) and I started using regularly around age twenty," he said on Facebook. “My addiction really kicked in after a back injury when I have prescribed opiate pain killers."

"My addiction took over my life," he explained. "I lost absolutely everything... when I walked into rehab, I literally had the clothes on my back."

But after Jason completed his rehab...

He regained custody of Krystian, and he now works to share the realities of addiction and to help other addicts.

His time in rehab has encouraged him to make some massive changes...

"I drew strength from the others I met in treatment who had been where I had been and hurt the way I had hurt and had come out of it. The treatment center I went to was a peer-driven recovery model where all employees were former clients," he said.

Jason has now embarked on the #CleanChallenge...

This is when former addicts post "before and after" pictures on social media to highlight the effects of drug use.

His Facebook post has shown how far he has come since giving up the drug use and how it has transformed his entire life.

Our #tuesdaymotivation comes from Gabi D. who will be celebrating 30 months #clean and #sober in December! 🖤 We enc… https://t.co/FNobOPAbi1
— Recovery Unplugged (@Recovery Unplugged)1575399615.0

Other former-addicts began posting their transformations, and they are all equally as remarkable.

This goes to show how recovery is possible.

#CleanChallenge I really didn’t care if I lived or died. My soul was corrupt and I didn’t think it could be recov… https://t.co/q1EVQmOPdV
— ReecoveringAri (@ReecoveringAri)1575514600.0

A massive well done to Jason and those who have managed to battle their addictions!
20%