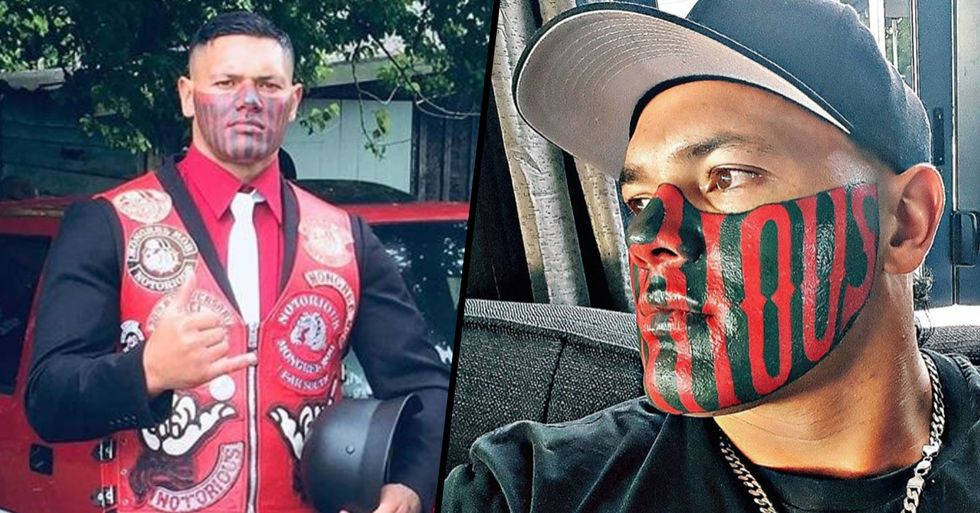 We all know the risks that come with hugely visible tattoos, and it's no secret that many employers will hold this against you.

One man from New Zealand is struggling massively to find work thanks to his huge face tattoo, and it's nothing that we've quite seen before.

Tattoos are an incredible artform...

One man from New Zealand has truly felt the strain of his past decisions...

Puk Kireka is a Tamatea rugby club player, and he has a very exposed brand of his troubled past as a mobster.

He used to be a part of one of New Zealand's most "notorious gangs"...

The gang was called the Mongrel Mob, and Puk went to some extreme lengths to prove his loyalties to the gang.

The Mongrel Mob aren't a gang one would want to cross...

They are the largest gang in New Zealand, and they even have branches connecting to Australia and Canada.

He decided to tattoo more than half of his face with the word "Notorious"...

And as you can see, it's pretty big.

And after joining, Puk served 5 years in prison non-consecutively - 3 years for violence-related charges and 2 for standovers.

Whilst Puk was in the gang, he was also addicted to drugs...

And this spurred on the violence even more.

Even though Puk overcame his addictions during his last prison sentence...

Many members of the notorious gang are still heavily dependent upon alcohol and drugs.

But even though Puk now wants to turn his life around...

He is finding it rather difficult because of his huge face tattoo.

Many people on social media are unsympathetic towards Puk's situation...

And many have asked why he simply doesn't just get his tattoo removed.

But it really isn't as simple as just removing the tattoo...

A face tattoo such as Puk's would take approximately twenty sessions to remove, with 5 - 6 weeks of rest in between each session. Here in the U.S, it could take up to $10,000 to remove, and side effects of removal include scarring, swelling, skin discoloration, or infection.

But despite this setback...

Puk is pursuing a career in the sports industry, and he plans on starting a Sport and Recreation course at the Eastern Institue of Technology that will help him achieve a career a rugby coach.

We wish Puk the best of luck in his future and career...