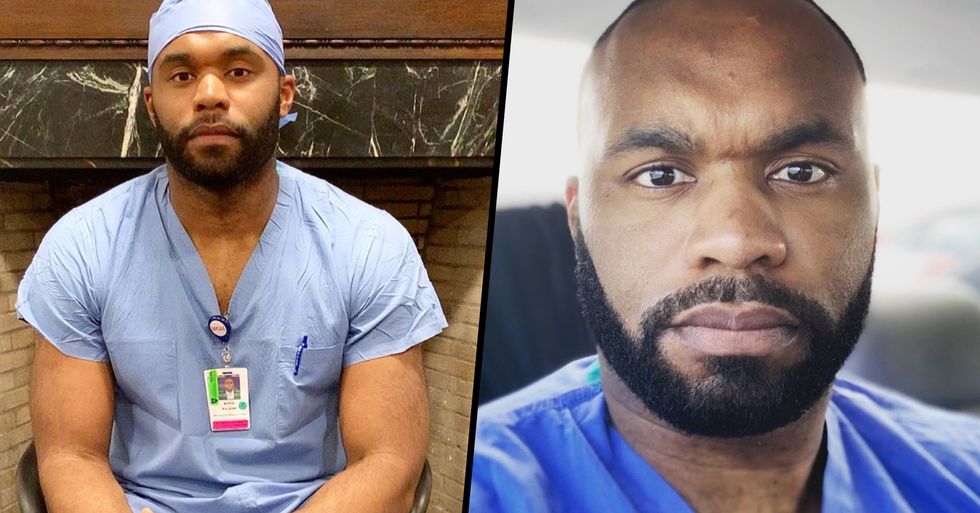 NFL players have provided us with some iconic moments over the years, but while the sport has been put on hold because of obvious reasons, they are finding other productive ways to spend their time. One former player has decided to use his other qualifications to help out during the global pandemic.

Keep reading to see what heartwarming moment inspired this man to risk his life out on the frontline...

The National Football League has an incredible history...

And it builds superstar players such as Myron Rolle, who found his drive and determination through the sport.

The NFL is responsible for our country's most iconic event...

The Super Bowl frequently tops the ranks as the most-watched broadcast in the US - firmly cementing itself as America's most-watched game and most definitely earning a grand name for the NFL.

And the game has given the world some heroes...

Myron Rolle, a former NFL superstar decided to trade the protective helmet for a medical mask.

Born in October 30, 1986, Rolle started his journey in the sport when he moved to the States.

Even though he was born in Texas, he spent a few years in his home in the Bahamas before moving to the United States permanently.

Rolle's career got off to an amazing start...

When he started playing high school football at the Hun School of Princeton, he started receiving a lot of positive reviews from those who came to watch.

And soon after, he was crowned the number one high school prospect in the country by ESPN.

And the accolades just kept on coming as he also won the prestigious award known as "Franklin D. Watkins Memorial Trophy", the premier African-American scholar/athlete.

But it wasn't just his football career that he was focused on...

The former Titans player decided he would try his hand out in academics too, opting to study medicine.

But as things got more demanding on the field and in school, he had to make a choice.

At first, he decided he was going to just postpone his career in the NFL so he could go and study medical anthropology at Oxford University but later decided to hang up his helmet altogether.

Even though he had initially signed a 4-year contract with the NFL, he left the game in 2013.

He decided to enroll at Florida State University College of Medicine and a few years later was accepted to a neurosurgery residency at Massachusetts General Hospital and Harvard Medical School.

Talk about a man who can do it all...

And since then, the third-year neurosurgery resident has been working out on the front lines trying to save people's lives.

As the disease continues to spread across the world, Rolle told ESPN about the importance of his work.

“Our neurosurgical floor has been transformed into a floor just full of [virus] patients. It is hectic, that’s for sure."

"I was seeing so many individuals with respiratory distress and respiratory compromise, and the numbers are staggering. Our bed space, our operating rooms may even be turned into ICUs because there are so many people that are either positive... or suspected of having it."

He also revealed how his career in football gave him the mindset he needed to tackle these kinds of obstacles:

"Football has never left me. I still wake up in the morning and think of the operating room like a game, like it's showtime let's perform," Rolle said. "I got to do what I got to do because people are counting on us right now. This is our time to help very sick people. And so that motivation continues to drive me every single day."

"Coming off a 24hr shift. Our hospital has enacted a mandatory “mask on" at all times policy. Future already told us to keep our “mask on" and give out prescription pills when indicated lol. For real though..stay safe, everyone. Do your part. #2% #RepTheSetGottaRepTheSet #FlattenTheCurve."

It is heroes like Rolle, that patients can receive the help they need.

Many people have flocked to his Instagram to leave him kind and comforting messages. Now it's time to do your bit. Stay home. Protect healthcare professionals. Stay safe. Keep scrolling to read more heartwarming stories about how people are helping the most vulnerable people in our society...