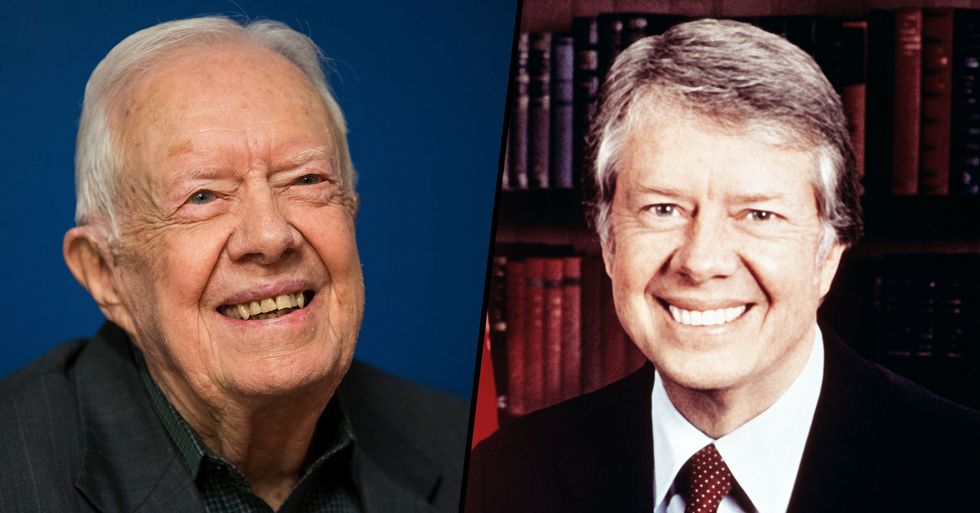 It is a very special day today... because it is former president Jimmy Carter's ninety-sixth birthday!

Jimmy Carter has led an interesting and inspiring life...

And despite this, his teachers and peers alike could see he was destined for great things. In 1943, aged only fifteen, Jimmy was accepted into the U.S. Naval Academy in Annapolis.

He loved the navy but returned to Plains in 1953.

It was during these years back in Plains that Jimmy realized his passion for improving the welfare of his community. His father had been particularly influential within the Plains community during his lifetime, and Jimmy wanted to emulate this. Between the years 0f 1954-1962, Jimmy took an active interest in joining local boards, with him being particularly interested in education.

In his life, he refused to join the White Citizens Council...

A life-long supporter of civil rights, Jimmy refused to be a part of the racist white movements that engulfed his hometown in the South. Growing up working in the fields, he recalled: "We were the only white family. I was completely absorbed in black culture. Black women took care of me. All of my playmates and friends were African Americans."

And in 1962, Jimmy was elected to the Georgia State Senate.

He served out 2 terms in the senate between 1962 and 1966. He then tried for Governor of Georgia but lost out to arch-segregationist Lester Maddox.

But after 4 years, Jimmy was back and more popular than ever.

In 1971, he once again tried for the governor of Georgia position and this time he was successful. It was after this that things began to change very quickly for him...

The U.S. was ready for a president that was for the people.

In a famous speech, as part of his presidential campaign, Jimmy said: "We’ve seen walls built around Washington, and we feel like we can’t quite get through to guarantee the people of this country a government that’s sensitive to our needs, that we can understand and control, that’s competent, well-managed, efficient, economical, purposeful, and also a government of which we can be proud."

At the end of 1976, Jimmy Carter was elected as the thirty-ninth President of the United States.

Carter was innaugrinated as 39th President of the United States on January 20, 1977.

The President dedicated his time in office to the causes he cared about.

Primarily improving the U.S's relations with countries all over the world, improving education for children in the U.S. and attempting to bring in a national health service.

He even gave up his peanut farm to become president.

Is this a good time to remind everyone that the emoluments clause meant Jimmy Carter had to give up his little peanut farm?
— Andrea Junker ® (@Andrea Junker ®)1571347254.0

Back then there was this thing called the emoluments clause which meant presidential elects would have to give up any businesses once they became president. This was done to ensure they gave complete focus to the job in hand and proved they were completely dedicated.

And Jimmy continues to dedicate his life since his presidency in traveling the world to help those in need and to negotiate for the human rights of those who are not being heard.

And the person who has been by his side throughout it all?

On receiving his naval commission, eighteen-year-old Jimmy married Rosalynn, who was also from Plains.

After getting hitched, the newlyweds decided to move to Norfolk, Virginia.

For the next 6 years, Jimmy's job in the navy took the pair to various places. They lived in Virginia, Hawaii, Connecticut, California, and New York.

And it's amazing that they have been blessed enough to watch them grow to become the people they are today.

"I think a good husband has to depend on having a good wife."

Jimmy always considered marrying Rosalynn as the key to his successes. The pair have now been married for a whopping seventy-four-years, breaking their very own record set last year.

And now, Jimmy has reached yet another milestone...

He's turned ninety-six-years-old today, on the 1st of October 2020!

This birthday has officially made Jimmy the oldest living former president of the United States...

And it's clear that he continues to be one of the most loved going by the floods of well wishes from fans across the country!

Jimmy Carter is a living saint. He is a role model for the best of humanity. The world is a better place because… https://t.co/LHWaaoaDM1
— The USA Singers (@The USA Singers)1601554511.0

To celebrate this big day, Jimmy plans on spending a quiet day at his Plains home with Rosalyn...

According to a spokeswoman for the Carter Center in Atlanta.

For more, keep on scrolling to read about what Jimmy had to say about the death of George Floyd...
29%