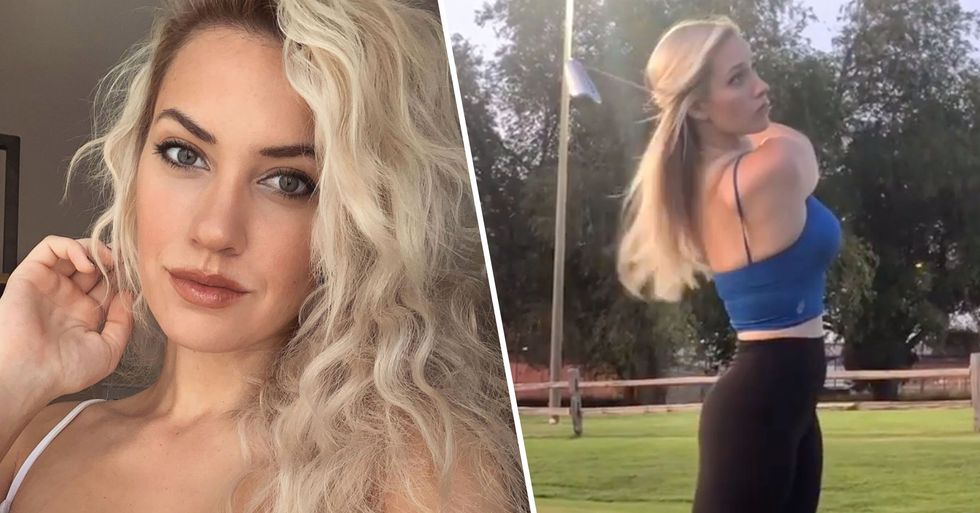 A former professional golfer has come forward to claim that several men have hoodwinked her into giving away free golf lessons and equipment by "pretending to date her"... It's scandalous, I know.

Keep scrolling to hear her shocking dating stories for yourself...

At first glance, Paige Spiranac looks like she has never touched a golf club in her entire life.

She isn't your average looking golfer, is she?

But there is a little more to Paige than initially meets the eye.

The twenty-seven-year-old, from Colorado, has played golf professionally since college, and now dedicates her life to the sport.

Now, most women don't aspire to be professional golfers...

So where exactly did Paige's passion for the unlikely sport come from?

Well, she originally had her sights set on the world of gymnastics.

As a child, Paige was a keen gymnast, but a severe knee injury at the age of twelve soon foiled any plans of her ever competing professionally.

Paige was at a loss at what to do next.

As a result of a hair condition, Paige was bullied as a child and struggled making friends, meaning she found herself to be alone quite frequently.

So she was quick to find solace in the isolation of golf.

After recovering from her injury, Paige discovered the world of golf and was instantly hooked. She even became homeschooled so she could dedicate more of her time to training.

And her efforts evidently paid off.

Upon starting college, Paige threw herself into golfing competitions, with her taking part in 3 events for the University of Arizona Wildcats during the 2011–2012 season. The following year, she transferred to San Diego State University, where she successfully competed in several more championships.

That year, Paige's golf-oriented social media presence had grown to unprecedented levels and ultimately resulted in her being able to compete in the Omega Dubai Ladies Classic. She missed the cut, but the exposure resulted in many sponsors and endorsement deals, officially making her a professional golfer.

She played professionally for the 2016 season...

But this was to be her last, as she hasn't played in any championships since.

Paige is now focusing on growing her own brand.

Paige has become somewhat of a social media influencer, and now boasts an impressive 2.4 million followers on Instagram and 120,000 subscribers on YouTube.

But golf is still her number one passion.

Her social platforms are dedicated to all things golf, and she regularly shares her own tips and tricks to playing the sport successfully.

But, sadly, some people take advantage of her passion.

In a recent appearance on the podcast, Playing A-Round, Paige opened up about her experiences with men using her for her golfing skills.

It turns out that some men want Paige for something other than her companionship...

Yep, some men have actually used Paige to improve their own golfing skills.

It's utterly shocking, isn't it? Talking about her experience with dating, she explained, "Unfortunately, guys were using me for golf lessons, golf equipment, and golf balls."

Talking about how she'd start conversations, she said:

"I would always open up a conversation with, 'Hey I play golf' and anything along those lines and I thought that it would work."

But many of her retrospective partners had other ideas.

"(They'd say) 'So Paige, let's go out on a golf date. I'll take you to this driving range and we can just hit golf balls' and I'd be like, 'Yeah, that sounds awesome'. It would turn into an hour lesson of me just helping the guy become a better golfer."

Men would literally pretend to go on "dates" with Paige...

And just end up receiving a free lesson from her. "There was this other guy who did the same thing but he wanted golf lessons, and he would text me like 24/7, he was really cute and flirty with me. But the only time we would go on 'dates' - and I put that in air quotes - is because they were lessons, and so I would sit there and give him lessons, and he didn't tell me he had a girlfriend for 6 months!"

It is totally unacceptable behavior.

But they would get away with it, because Paige was in an incredibly vulnerable place. "That happened all the time since I was desperate and I wanted guys to like me... And I never learnt my lesson because I thought, 'This is my way in, guys think I'm cool because I play golf'. Then it just turned into me giving them golf balls and getting them on courses for free."

But luckily, Paige's days of being used for her skills are over.

Paige is now happily engaged, to someone whose identity she has chosen to keep secret for now. Not that we blame her...

We wish Paige all the happiness in the future.

Paige is one of the many women paving the way for sportswomen far and wide... Alongside Heaven Fitch, who is a teen professional wrestler. Keep scrolling to read more on her incredible story, and to hear just how she recently made history...