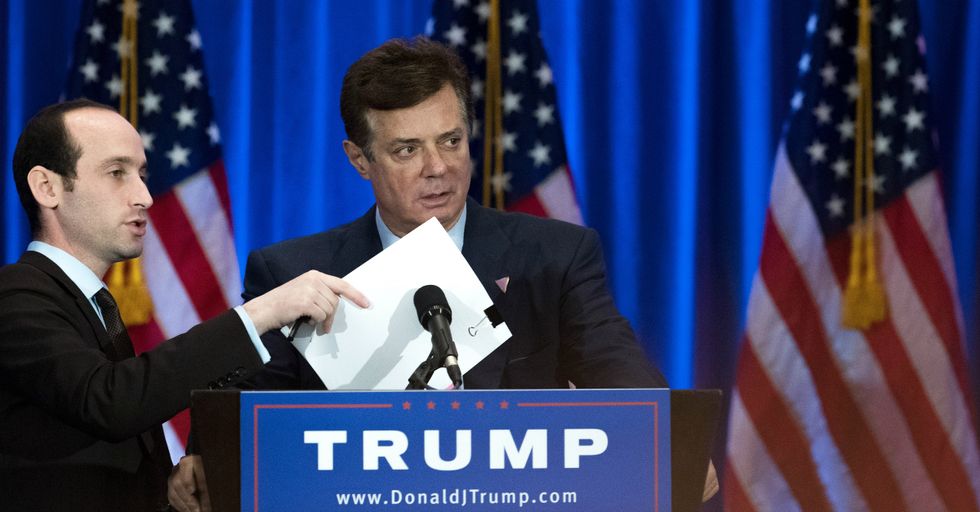 Ever since Robert Mueller was hired as special counsel in the Russia investigation, many of us have been waiting with bated breath for developments on the case. Well, wait no longer! As of today, two people have been charged as part of the ongoing investigation: Paul Manafort and Rick Gates (Manafort's former business associate).

Paul Manafort and his former business associate Rick Gates were indicted this morning.

According to informal Trump adviser Roger Stone, Manafort, 68, has been expecting this indictment since earlier this summer. In July, the FBI conducted an early-morning raid of Manafort's home, removing binders of documents and copying his computer files in an effort to find evidence he had created offshore accounts.

The indictment against the two men contains a total of 12 counts.

The charges include conspiracy against the United States, money laundering, and several other financial charges. According to the charges against Manafort and Gates, Manafort laundered more than $18 million in order to buy properties and services. According to prosecutors, Manafort used that overseas money to enjoy a wealthy lifestyle within the U.S. without having to pay any taxes on it. Gates is accused of transferring more than $3 million from offshore accounts.

Manafort and Gates, along with George Papadopoulos, are the first people to be charged as part of special counsel Robert Mueller's investigation.

Mueller's investigation centers around whether there was any collusion between the Russian government and any individuals associated with Trump's presidential campaign. According to Buzzfeed News, the probe into Manafort centers around 13 suspicious wire transfers which Manafort used to transfer more than $3 million all around the world between 2012 and 2013.

You might remember Manafort best for his involvement with the Trump campaign.

Manafort joined the campaign in March of 2016. Before long, Donald Trump promoted him to the role of chairman and chief strategist, which gave him control over the campaign's day-to-day operations. While in that position, he attended several meetings...including that infamous one that took place in Trump Tower last June where Trump's senior advisors met with Russians to try to obtain information that would hinder Hillary Clinton's campaign. Just a few months after Manafort joined the campaign, it was revealed that he had received more than $12 million in undisclosed funds from Viktor F. Yanukovych — a pro-Russia politician and the former Ukrainian president. Yanukovych now lives in exile in Russia and is currently wanted in Ukraine for high treason. In light of the reports, Trump fired Manafort from the campaign. Needless to say, Manafort's indictment doesn't look super great for Trump. However, it should be noted that no current or former members of the Trump administration are mentioned in the charges.

This morning, Manafort and Gates surrendered themselves to the FBI.

The two men are scheduled to make their first court appearance at 1:30 p.m. before a magistrate judge. There, they'll be arraigned on the charges. In other words, it might be time to start popping that popcorn. We can only assume things will be getting more and more interesting as Mueller's investigation continues.