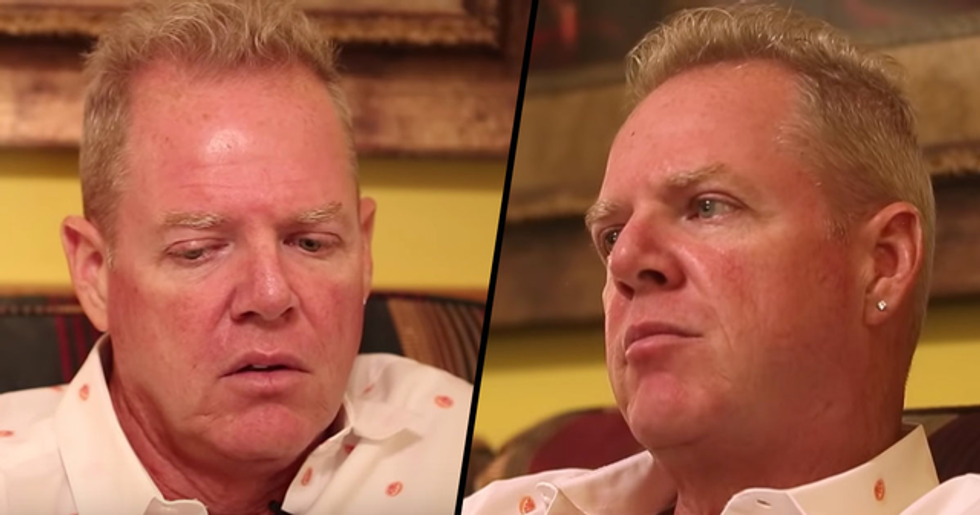 Founder of One of the Largest Conversion Therapy Ministries in the U.S. Comes out as Gay

There's nothing better than a nice dose of irony to kick start your day, is there?

And today's news is perhaps the most ironic thing to ever happen. Ever. The founder of Hope for Wholeness, one of America's largest gay conversion therapy ministries, has officially come out as gay.

Yes, the man who has spent his entire career condemning homosexuals has now revealed that he is, in fact, a homosexual himself.

And, remarkably, McKrae Game has now publicly apologized for the hurt he has caused over the years and is now disavowing the organization. Keep scrolling to read the full story, and to hear what McKrae has had to say on his shocking revelation.

Conversion therapy has plagued our Earth for decades.

Originating back to the early Freudian period, conversion therapists believe that homosexuality can sometimes be removed through various hypnotic and psychological, and religious methods.

This "therapy" spins a dangerous lie.

Some right-wing religious groups promote the concept that an individual can change their sexual orientation or gender identity, either through prayer or other religious efforts or through the so-called "reparative" or "conversion" therapy.

The techniques implemented by these so-called therapists are incredibly harmful.

Conversion therapists have been known in the past to use a variety of shaming, emotionally traumatic, or physically painful stimuli to make their victims associate those stimuli with their LGBTQ identities.

And just their existence alone can still be harmful to LGBTQ youths.

Conversion therapy amplifies the shame and stigma that so many LGBTQ young people already experience in their day-to-day lives. And, by sending a child to conversion therapy, parents and guardians will be instilling feelings of family rejection and disappointment, which ultimately risk seriously fracturing their relationship with their child.

These conversion therapists hold the firm belief that being LGBTQ is a mental illness...

Despite the fact that all major medical associations share an agreement that LGBTQ identities are a normal variant of human nature. And, to top it off, the American Psychiatric Association actually determined that homosexuality was not a mental illness back in 1973.

Yet, even in today's modern society, people are still at risk.

Though conversion therapy has gradually begun to die out as people become more awake to the facts, there are organizations out there who still practice the archaic method. ​According to a 2018 report by the Williams Institute at UCLA School of Law, an estimated 20,000 LGBTQ minors in states without protections were subjected to conversion therapy by a licensed healthcare professional just last year.

There are still many ministries that practice the "therapy."

Despite a number of different states banning the practice all together, there are still a staggering number of conversion therapies being inflicted upon young LGBTQ people today.

And, now, the leader of one of the biggest conversion ministries in our country has made headlines...

For coming out as gay. The irony is incredible, isn't it?

For years, he worked remotely with Exodus International, an Orlando-based conversion therapy network that comprised more than 120 ministries across the United States and Canada.

Game founded an Exodus-backed offshoot that he named Truth Ministry, based in his hometown of Spartanburg. He went on to develop a curriculum that teaches same-sex attraction is a multi-casual developmental disorder. He named the curriculum Hope for Wholeness. In 2013, the ministry re-branded and adopted the same name.

Hope for Wholeness' mission is to "shed light on the complicated issues of sexual and relational brokenness."

And their Facebook description reads: "Hope For Wholeness is a network of ministries that exist so that those who struggle with homosexuality find freedom to live in sexual and relational wholeness according to God's design." Crikey.

It is unclear just how many people Hope for Wholeness has counseled...

But Game estimates that it is well into the thousands. And, now, he has unbelievably come out as gay himself, after decades of gay conversion work.

After years of hiding, he has finally come out as his true self.

Game came out as gay earlier this summer, and thus formally cut all ties with the organization. He opened up about his experience in a lengthy, yet moving Facebook post last week, which was opened with "I WAS WRONG! Please forgive me!"

And Game has now opened up about both his revelation and remorse in a candid interview.

Game spoke to The Post and Courier about coming out to a small group of people when he was eighteen, but he was desperate to "meet a girl, fall in love and have a family" so he could continue practicing his faith and go to heaven. For 6 years, he himself was forced to endure conversion therapy, where his counselor blamed Game's father's neglect on his attraction to other men. He eventually got married and had 2 children.

He always knew he was gay.

“My brain was telling me ‘you’re going in the wrong direction,’" he said. “But my body was telling me otherwise." In the summer of 1993, Game was attending a conference for Evangelical Christians when, during a church service, he felt compelled to approach the pulpit. There, he sobbed and prayed for salvation.

He believed that his homosexuality could be cured.

And was firm on the philosophy that, if you determined the cause of someone’s attractions, you could learn to repress them. However, this didn't stop him from watching gay pornography, and even having an affair with another man.

But, now, he has seen the error in his ways.

And he admits that, from starting Hope for Wholeness, he has brought on years of harm and discrimination to the LGBTQ community. “I created it all," Game said on Hope for Wholeness. “We have harmed generations of people."

He acknowledges the hurt he has caused.

“I was a religious zealot that hurt people," Game said. “People said they attempted suicide over me and the things I said to them. People, I know, are in therapy because of me. Why would I want that to continue?"

And when Game came out in June, he was prepared for a backlash.

He still gets messages on Facebook from people who say they were traumatized by Hope for Wholeness. He gets angry responses on gay dating apps and across social media about his out-and-proud life. “You don’t deserve it," they’ve said. “Most people in the gay community have treated me ridiculously kind," Game said, “liking me for me now and not who I was. And I hope they just give me the chance to talk to them so I can hear them out and apologize."

He realizes that an apology isn't enough.

Game has truly seen just how wrong his actions were. Telling Christians they would "go to Hell" for being gay "was probably my worse wrongful act," he wrote. "I'd like all ex-gay ministry and conversion therapy counselors and organizations shut down."