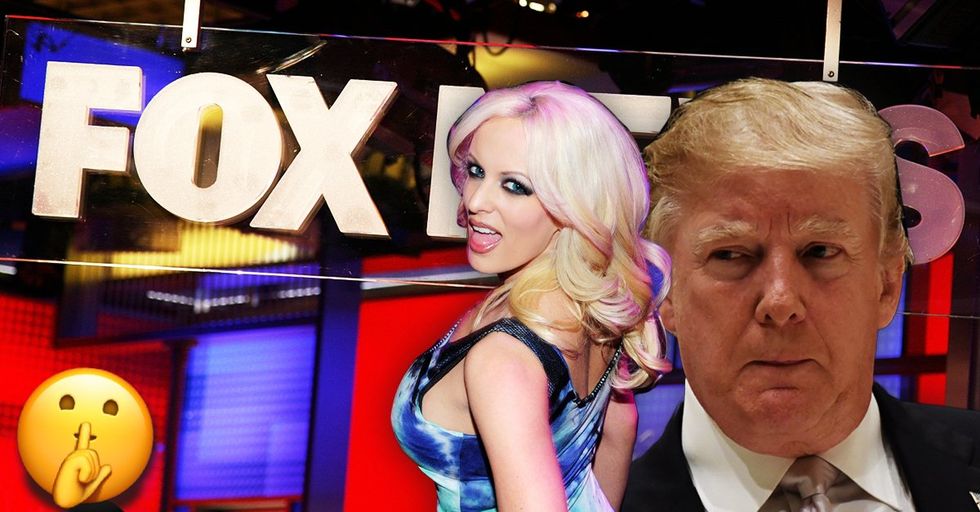 Another day, another way Trump and Fox News are colluding to bring down the United States of America.

That's right. We might be living in this nightmare reality because of Fox News. And Russia. And racist Americans. OK, it was a team effort, but Fox News definitely did not help.

That's the kind of story that used to bring down presidents. The Wall Street Journal published the story on January 12 — it detailed the affair, which occurred in 2006 after Daniels (whose real name is Stephanie Clifford) met Trump at a golf tournament in Lake Tahoe, and the alleged $130,000 payment to the actress in October 2016 to keep her quiet during Trump's campaign for the presidency.

That same day, the 12th of January, Trump's lawyer Michael Cohen passed along a letter signed by Stormy Daniels denying the affair and the hush money.

The letter was dated January 10, two days before the Wall Street Journal story broke. Hm. That's not suspicious at all.

But within days, publications started reporting firsthand accounts from Daniels herself from before the election, who admitted that she knew things.

"Things about Trump that only someone who had seen him naked would know," according to Slate. Daniels copped to a completely consensual affair with Donald Trump. She claimed to have evidence that would corroborate her story — phone numbers of Trump's assistant and bodyguard, for example. Slate spoke to three of Daniels' friends, who all said they were aware of the affair at the time. But before Slate could finish thoroughly reporting the story, Daniels stopped cooperating, and the story remained incomplete.

Now, CNN has reported that Fox News had the story of Stormy and Donald ready to go before the election and declined to publish it.

According to CNN, Fox reporter Diana Falzone filed a story about an affair between Daniels and Trump in October 2016. Unlike the trouble Slate had with corroborating the story, "Falzone had an on-the-record statement from Clifford's manager at the time, Gina Rodriguez, confirming that her client had engaged in a sexual relationship with Trump...and Falzone had even seen emails about a settlement."

But Fox News never published the story, and Falzone was (rightly) frustrated.

Someone familiar with this told CNN, "She had the story and Fox killed it." Cool cool cool. Fox News is an instrument of the apocalypse. But we already knew that. The most egregious matter is the fact that the network has gone after politicians for extra-marital affairs before, but they flatly refused to publish a story about Trump.

Fox claims that the story went unpublished because they couldn't verify all the facts.

If another media outlet had shelved a damaging Hillary story before the election it’d be the lead Fox story for a m… https://t.co/YT2guUUbRj
— Jon Favreau (@Jon Favreau)1516147089.0

Noah Kotch, the editor-in-chief and VP of Fox News digital said in a statement, "Like many other outlets, we were working to report the story of Stephanie Clifford's account in October 2016 about then-Presidential candidate Donald Trump and a possible payment by Trump lawyer Michael Cohen. In doing our due diligence, we were unable to verify all of the facts and publish the story."

But a lack of facts has never stopped Fox News before.

Fox News became extremely powerful decades ago, in no small part due to their reporting on the Bill Clinton/Monica Lewinsky scandal. What's the difference here? Oh yeah. Donald Trump was the Republican candidate for the presidency, and Fox News couldn't bear to see Hillary Clinton, a woman, in the White House.

The truth of the matter though, is that this story might not have even affected the election.

No surprise that Fox spiked a story that might have given Hillary the win. Wonder if Rupert cautioned Donald about… https://t.co/hh7fWyd4Om
— John W. Dean (@John W. Dean)1516174687.0

That's the sad reality of the situation and of the world we're living in.

Why this story seems to be making a splash now? When Trump has already gotten away with being president for a year? It's hard to tell. Slate's Jacob Weinberg surmises that it could have something to do with an "intensified, #MeToo-inspired effort to report on sexual abuse allegations against Trump and others," but beyond that, he's not sure.

The bottom line is for Trump, the rules are different.

A lot of that has to do with the irresponsible way Fox News has reported stories about him and his opponents since before the election. In Touch promises to publish a juicy tell-all interview with Daniels on Friday. But no matter how salacious the details, they won't be surprising. They won't be as damning as an accusation of rape by a 13-year-old girl. Trump is a monster and we all know that. It's just that enough people don't care.