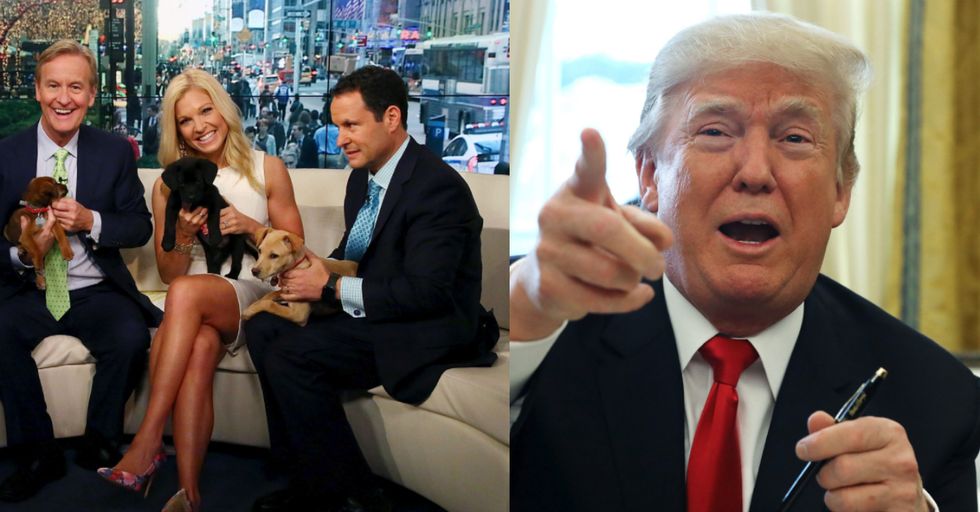 Donald Trump might love Fox News more than anyone in his family. But what do the employees of the network actually think of him?

A new report in Vanity Fair reveals exactly what the relationship between Fox reporters and the big man in the White House is like, and folks, it's problematic, to say the least.

We've entered uncharted territory. We're living in an apocalyptic comic book where our president is a reality TV star and he starts each morning with a healthy dose of state TV. Cool.

This is a real-life picture of Donald Trump watching Fox and Friends.

OK — no it's not. But this is probably what he looks like when they mention his name, which happens a lot on Fox News because as we know, Fox News is Donald Trump's only haven of praise on television. According to a new report from Vanity Fair, Donald Trump is dipping his fingers into Fox News way more than any president ever should, and it's troubling everyone involved (except Trump, of course).
When it was revealed that Rupert Murdoch was going to sell his Fox assets to Disney, Donald Trump called him in a panic, afraid that Fox News (which wasn't part of the Disney deal) might end up in the hands of more "liberal" (read: sane) people.

As you know, Trump would marry Fox and Friends if he could and regularly live-tweets his viewings of the show. It would be a true travesty for him if they stopped stroking his delicate ego every day.

Many times, he straight-up admits that his rambling tweets are the results of a Fox and Friends viewing sesh. It was recently revealed that the president spends 5 1/2 hours a day having "Executive Time." That's a lot of time spent watching Fox News and taking naps and craps, probably.

But even when Trump is supposed to be running the country, he's tweeting about Fox News programming instead (and nearly starting wars).

While it's absolutely inappropriate and bonkers that a cable news network should have this kind of influence over the president's policies (and maybe declarations of war?!?!?!), this is the insane reality of our situation.

Fox News programming has become inseparable from Donald Trump — his policies, his announcements, his character.

A day in the life of the president who doesn’t watch much TV primarily because of documents. https://t.co/JMt0inwOGR
— Daniel Dale (@Daniel Dale)1514955106.0

It's a parasitical relationship, only I can't decide who's the flesh-eating worm and who's the innocent host. I suspect it's not that simple. According to a Fox host interviewed by Vanity Fair, "There's absolutely direction" at Fox news now that Roger Ailes is gone, and Trump has become involved to the point of creating a dangerous "circular feedback loop" which is resulting in the President of the United States having way more input into a news network's programming than they ever, ever should...

Don't be fooled by the adorable puppies — something quite insidious is happening between Donald Trump and Fox News.

Vanity Fair reports that "Trump looms almost as large in the minds of employees as Ailes did. Fox hosts regularly get calls from Trump about segments he likes — or doesn't." One Fox news contributor said, "When you worked at Fox, you knew that at any moment Roger Ailes was watching. Every day was like a job interview with Ailes. Now it's the same way for Trump."

I cannot express to you how dangerous this is. When they're not sampling potato chips with Nick Lachey, they're pandering to the president and shifting their programming to make sure he views them positively.

Vanity Fair wrote, "Trump doesn't explicitly dictate talking points the way Ailes did, but over time, the effect can be similar." A former Fox anchor told Vanity Fair that Trump will call after a show and say, "I really enjoyed that" or "I really learned something. Then you know he got a new policy idea," the anchor said.
"One sure strategy has been to follow Trump's lead and continue attacking the Clintons," Vanity Fair wrote. Oh my lord. Fox News is clearly, on purpose, not covering real news items in favor of keeping Trump happy. This is real. According to Vanity Fair, this alliance with Trump is "mostly transactional — privately, many at the network have a nuanced view of the president."

"He's sort of viewed as this crazy person who calls all the time," a Fox executive said.

During the Republican primary, Fox was one of Trump's biggest adversaries. But they've done a complete 180 since he took office because it's making him happy and making him happy means he tweets about it and when he tweets about it, more people watch their show. It's disgusting. One executive told Vanity Fair that the network has become a "safe space for Trump fans." "Those who didn't get on board felt the pressure," they wrote. "Last spring, Bob Beckel, a former co-host of The Five and vocal Trump detractor, found an unsigned note in his office telling him to back off Trump."

It is absolutely bonkers, but, Vanity Fair wrote, "it's likely that if Ailes was still running Fox, the network wouldn't function as state TV."

Ailes at least understood that the network would retain more power if it "appeared to be fair and balanced" even though it actually was not. Without Ailes, they've completely bowed down to Trump as if he's some sort of emperor and not the worst president in recent history. According to Vanity Fair, "it’s frustrating to some inside Fox that the network is now seen as the propaganda wing of Trump’s White House and lacks a post-Trump programming strategy. 'It’s freaky to see him tweeting at Fox and Friends,' one staffer said. 'That doesn’t help us. We’re not state television.'" Why don't you try telling that to your president.