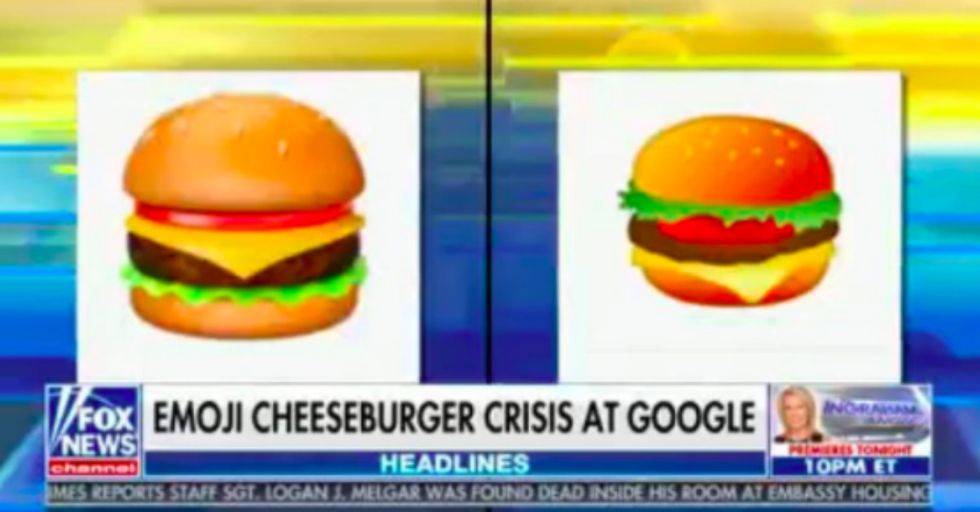 As Trump’s Associates Are Dragged to Court, Fox News Is Busy Covering... Cheeseburgers?

Today was a pretty big news day. Former Trump campaign manager Paul Manafort and his associate Rick Gates were indicted in Robert Mueller's Russia investigation on charges of conspiracy against the United States and money laundering.

Needless to say, this story has been dominating the news cycle... everywhere except Fox News, that is. Sure, the network beloved by Donald Trump mentioned the news of the indictments, but they made sure to make time for another crisis, one they apparently believed deserved as much weight as a conspiracy against the United States: the crisis of the cheeseburger emoji.

The cheeseburger emoji debacle began Saturday morning when Thomas Baekdal tweeted about the placement of the cheese on Google's burger emoji.

I think we need to have a discussion about how Google's burger emoji is placing the cheese underneath the burger, w… https://t.co/A6NR5aOjQT
— Thomas Baekdal (@Thomas Baekdal)1509208198.0

It's obviously so very wrong. But so is Apple's. Lettuce? On the bottom? What is this, the Upside Down? With almost 20,000 retweets and more than 40,000 likes, the burger emoji crisis spread like mayonnaise (which doesn't belong on a burger, if you ask us).

Obviously, as many pointed out, the cheese belongs on top of the meat of a burger. But the tomato can't be on top, or else it will make the bun all soggy.

Google and Apple got the cheeseburger wrong, but somehow, some way, Microsoft got it right. A travesty, sure, but not quite the travesty that is the ongoing investigation into Trump's ties to Russia.

We thought it was all over when the CEO of Google himself, Sundar Pichai, weighed in:

Will drop everything else we are doing and address on Monday:) if folks can agree on the correct way to do this! https://t.co/dXRuZnX1Ag
— Sundar Pichai (@Sundar Pichai)1509249983.0

He was ready to drop everything and focus all his energy on fixing a tiny picture of a cheeseburger that you send your friends in Venmo when you pay them back for In-N-Out so it looked more accurate. This is the world we live in.

Come Monday morning, there were major things happening in Robert Mueller's investigation. So there's no way major news outlets were going to give airtime to a silly Internet story about an emoji. Right? Wrong.

Fox & Friends is on a commercial break right now, but here is what they were discussing a few minutes ago. https://t.co/gqpgtwx7XH
— Marina Fang (@Marina Fang)1509367668.0

Fox & Friends, Donald Trump's favorite show, covered the indictments... because they had to, but as soon as they could, they switched to the burger emoji story, presumably to keep Donald Trump from flying into a blind rage. Seems like they think they can dangle a story about a burger illustration in front of his face and maybe he won't impeach himself via Twitter.

Apparently, that wasn't the only distraction Fox News tried to smother the indictment story with.

"State TV" as Lauren Duca calls it also ran with a story about how Newsweek is under fire for publishing a controversial op-ed that asked if all "conservative loudmouths" are Irish-American. They also had Corey Lewandowski on to scream Hillary Clinton's name a bunch of times in hopes that Trump would take a big bite of that and not lose his s*** over his crumbling administration. Nice try, Fox News, but we see exactly what you're trying to do.