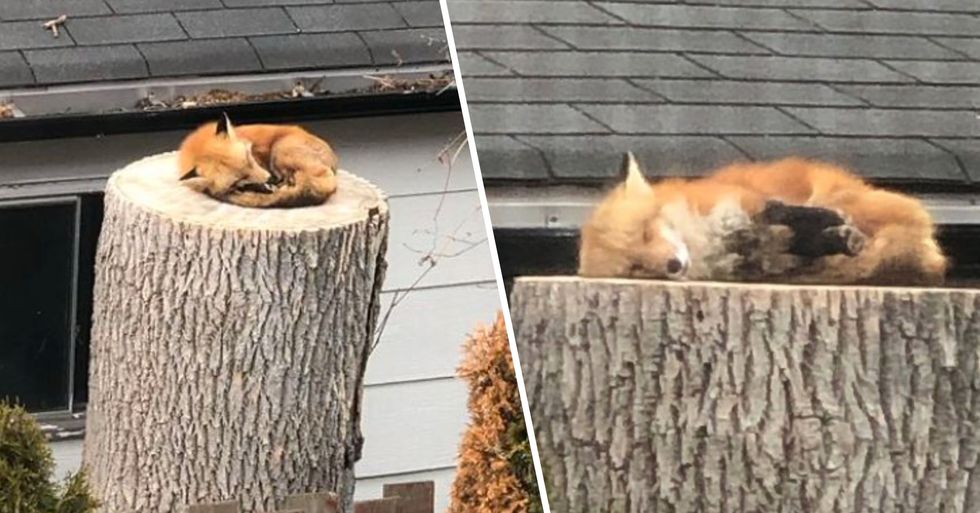 If you're in a bad mood, this story is sure to make you smile.

An adorable fox was spotted having a snooze in an unlikely place and it made the day of a couple stuck inside due to the pandemic.

Keep scrolling for the photos, including a selection of the sweetest pictures of so-called "zen" foxes for your scrolling pleasure...

When you think of cute animals...

The first thing that springs to mind is a dog, kitten or perhaps a fluffy rabbit.

Well, they aren't always the first thing that springs to mind... Although, it seems they actually have a very underappreciated sweetness to them.

And a sighting this week has proven this.

A couple has been well and truly cheered up during this pandemic after spotting an adorable fox taking a snooze in an unlikely place.

A photographer has captured pictures of so-called "zen" foxes - aka foxes thoroughly enjoying themselves. So, before we get onto this week's adorable sighting, scroll on for some of the cutest pictures you'll have laid eyes on.

"The most beautiful animals are happy animals."

Roeselien Raimond is a Dutch photographer with an unusual muse: "Zen foxes." Ans she is absolutely fascinated by these wild animals.

She believes foxes "live in the moment."

"It's almost as if they invested mindfulness themselves."

They do look pretty peaceful, don't they?

These majestic creatures know how to take some time out to center themselves.

"I love them best when they’re totally at ease: free from pain, fear, cold, hunger or any other discomfort."

She claims it's the state humans would describe as "happiness."

"Foxes master this comfortable state of being like no other."

I mean, it seems as if we should all take a leaf out of their books.

We should all take mindfulness into consideration more.

"Of course, they have their duties calling as well."

"But once that rabbit is consumed, the territory defined and taken care of important things like procreation and upbringing, it’s time to relax."

This fox looks like it's really mastered the art of meditation.

Roeselien likes to describe them as "foxy teachers."

What an interesting name...

"Foxes are always 'in the moment'."

This fox has got it all down.

"No need for mediation courses..."

Look at that adorable smile!

They can even choose to zone out while they're on their feet.

There is no better time to relax then after a day spent hunting.

"They feel the warmth of the sun on their fur..."

I see this fox is really enjoying its time.

"They close their eyes and then it’s a matter of just being there."

I mean, Roeselein feels pretty passionately about the issue.

Here are a few wise words for you:

"But if you manage to take things as they come, by just enjoying the beautiful nature around you, who knows what might happen."

This is such an amazing shot...

Imagine being able to capture a photo like this!

A little background information on the photographer...

Roeselien has "always been a bit of a thrill-seeker and used to get easily bored."

"Through the years, I learned that an overly fanatical attitude can kill your pleasure."

I mean, it's better not to expect a lot or you'll be left disappointed, right? This is a rule she lives by.

This shot is one of my favorites!

What a fascinating creature!

So, now you're nicely warmed up...

Let's get onto this week's adorable story.

This little cutie was spotted by a couple currently in self-isolation...

And, given how sweet it is, their daughter, Sara, decided to upload the snaps to Twitter. "Can we all just take a moment to appreciate the sweetest lil fox sleeping on a tree stump in my parent’s backyard," she wrote.

And it's safe to say, the internet loved it.

"My parents had seen her in the yard several times this winter," Sara told Bored Panda. “In fact, she found one of my sister’s dog’s toys in the yard and was moving it around in the snow a few nights. The tree got cut down in late October, but they never saw her up there until the day I posted the picture. They were really surprised to see her in the daylight, let alone sleeping on top of the stump."

"Foxes are nocturnal. She leaves at night to hunt," Sara added. “My parents did see her running down the main street by their house, but since everyone is indoors, for the most part, she wasn’t in any danger from cars. Otherwise, she hangs out on the stump when it’s sunny – sometimes she’s there and sometimes she’s not!"

This is hands down the sweetest thing we've seen.

Just what we needed to cheer ourselves up!