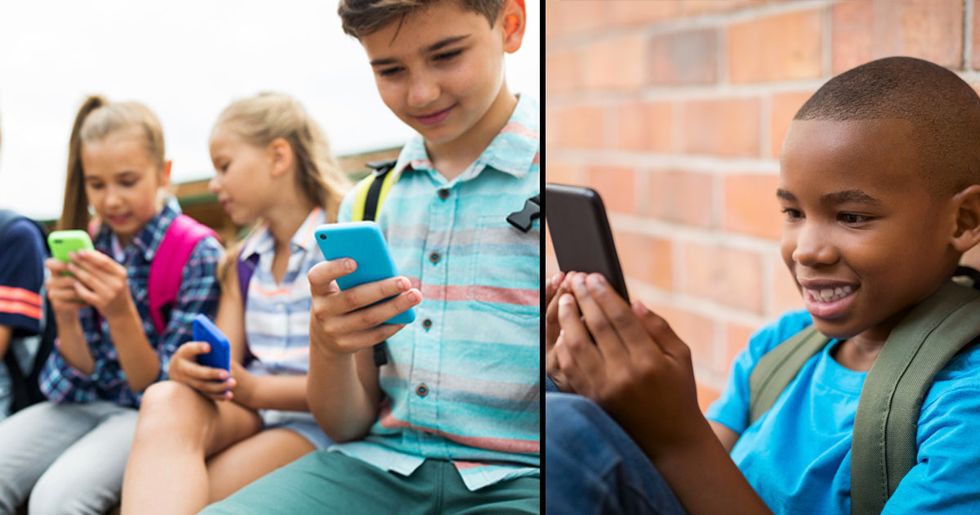 France Bans Children Under 15 from Using Phones at School

It seems as though children today can bearly do anything right. Whether they're being criticized for growing up too fast, mocked for being precious little snowflakes, or told that all the things that they like are wrong or stupid, in many ways, there's never been a worse time to be a teenager. But one area wherein kids are pretty much universally criticized? Their overreliance on cell phones.

But now, the entire country of France has decided to take matters into its own hands. Feeling like the situation has gotten out of control, they've imposed a blanket ban on the use of cellphones by any kid under the age of fifteen during school hours - and the internet has had plenty to say about it.

Kids often get a bad rep.

As children grow up, it's common for them to have some fundamental disagreements (and therefore arguments) with authority figures.

But there tends to be one particular area that arguments center around.

Many parents grew up in an age without an excess of technology - but now, for Generation Z, it plays an enormous role in their lives.

Because now, phones are far more than phones.

They're essentially miniature portals into another dimension, taking us to any distant corner of the internet in a manner of clicks. Which, when you put it like that, does sound pretty addictive.

Although not everyone thinks so.

Parents and teachers seem to be almost constantly complaining about the amount of time that children spend on their cell phones - claiming that they're forgetting how to interact with real life.

And, now, one country has made this dislike official.

This week, France has hit the headlines for taking a rather extreme stance against kids using their cell phones.

The ban was passed by President Macron.

It follows his campaign pledge, in which he promised to do something about the problem of kids using their phones at school.

It'll come into effect on Monday.

This is when they return from their summer break - it seems early, but that's how the French do it, apparently.

The ban affects every type of smartphone.

So, if there's one lone French teenager out there still using a phone that doesn't connect to the internet, we guess it's your time to shine.

There was already a ban on the use of phones in the classroom.

But this latest update extends the parameters of the ban even further.

The original classroom ban came into place in 2010.

But the 2019 update means that kids can't even go on their phones during recess or lunchtime, so long as they remain within the school property.

There are some exceptions to the rule.

Teenagers with disabilities, for example, won't be affected by the blanket ban and will need to make personalized arrangements with their schools.

But there are some aspects that the government will be very strict on.

In the past, kids were allowed to keep a hold of their cell phones - so long as they were switched off and stored away from them in a locker. Not anymore.

The ban comes after fears about how reliant children were on their phones.

It's true, they do seem to be a pretty big distraction. Even if the phone is simply in your pocket, it's almost irresistible to take a peek.

The government are keen to express that they don't dislike technological innovations.

But, "being open to technologies of the future doesn't mean we have to accept all their uses," Education Minister, Jean-Michel Blanquer, told Agence France-Presse.

Many have spoken out in support of the ban.

Kids are hard to keep under control at the best of times - and having a portal to the internet accessible via a couple of clicks can't be helping.

In fact, a survey posted on Twitter came out overwhelmingly in support of the ban.

With a mobile Phone ban coming into force in France, a survey states parents in the U.K. would welcome this here.… https://t.co/9zQZggAisu
— Sarah Clark (@Sarah Clark)1536083154.0

Although we'd like to see the same question surveyed with a bunch of French teenagers. We suspect that there would be some quite different results.

Many shared this opinion.

Teachers and parents around the world are hoping that France is only the beginning.

Although there were some dissenting opinions.

There are some on Twitter who believe that phones aren't the problem - and if you take them away, kids will find something else to be distracted by.

Although others have a different issue.

Some think that banning phones in schools isn't enough - they think that they should also be taken out of other areas in which concentration is required, like a busy office.

And, although the ban seems controversial, there's certainly one major upside to it.

Many are hopeful that, without the social crutch of a cell phone, kids will once again learn how to talk to one another in real life! Not finished despairing over kids these days? Keep reading to read about why schools are banning analog clocks in schools...