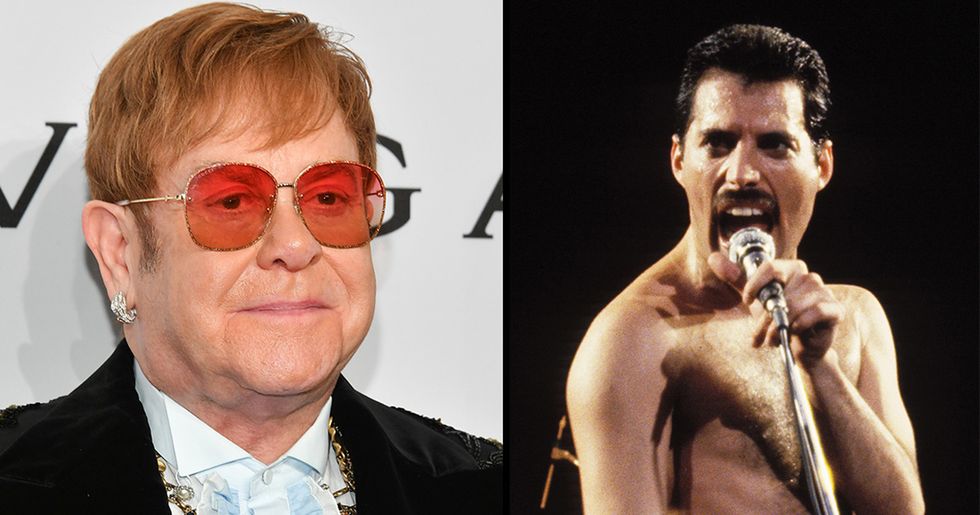 In a chapter of Elton John's book, Love is the Cure: On Life, Loss and the End of AIDS, the 71-year-old Grammy winner revealed a previously-unheard story about his friend Freddie Mercury's AIDS diagnosis and death.

Mercury's life story is currently in the public consciousness, thanks to the new movie about Queen, Bohemian Rhapsody. But this is a story that may come as a surprise to many Queen fans.

Elton John remembers being absolutely devastated by the news that Mercury had contracted AIDS.

Even though he was the glamorous rockstar on stage, Mercury was notorious for being very buttoned up about his private life. He didn't let the public know he had AIDS until the actual day of his death — November 24th, 1991.

His courage in the face of death was heroic.

"Freddie didn't announce publicly that the had AIDS until the day before he died in 1991. Although he was flamboyant on stage - an electric frontman on a par with Bowie and Jagger - he was an intensely private man offstage. But Freddie told me he had AIDS soon after he was diagnosed in 1987. I was devastated. I had seen what the disease had done to so many of my other friends. I knew exactly what it was going to do to Freddie. As did he. He knew death, agonizing death, was coming. But Freddie was incredibly courageous."

He lived for others.

"He kept up appearances, he kept performing with Queen, and he kept being the funny, outrageous and profoundly generous person he had always been. As Freddie deteriorated in the late 1980s and early '90s, it was almost too much to bear. It broke my heart to see this absolute light unto the world ravaged by AIDS. By the end, his body was covered in Kaposi's sarcoma lesions. He was almost blind. He was too weak to even stand. By all rights, Freddie should have spent those final days concerned only with his own comfort. But that wasn't who he was. He truly lived for others."

"Freddie had passed on November 24, 1991, and weeks after the funeral, I was still grieving. On Christmas day, I learnt that Freddie had left me one final testament to his selflessness. I was moping about when a friend showed up at my door and handed me something wrapped in a pillowcase. I opened it up, and inside was a painting by one of my favourite artists, the British painter Henry Scott Tuke. And there was a note on the front from Freddie."

"Years before, Freddie and I had developed pet names for each other, our drag-queen alter egos. I was Sharon and he was Melina. Freddie's note read, 'Dear Sharon, I thought you'd like this. Love, Melina. Happy Christmas.' I was overcome, 44 years old at the time, crying like a child. Here was this beautiful man, dying from AIDS, and in his final days, he had somehow managed to find me a lovely Christmas present. As sad as that moment was, it's often the one I think about when I remember Freddie, because it captures the character of the man. In death, he reminded me of what made him so special in life." What an incredible friend.