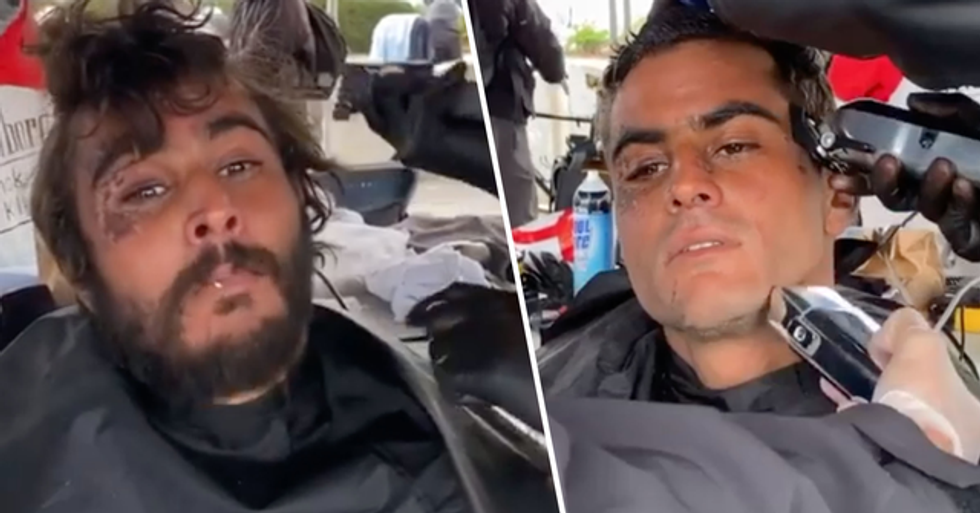 A homeless man struggling with addiction has been given a remarkable makeover that has left him "looking like a model."

Keep scrolling to see his incredible transformation, and to read the story behind the amazing program aiming to transform the lives of those living on the streets...

The Men's Groomer Foundation is fighting back against homelessness, one hair cut at a time.

Founded by Jason Schneidman, the foundation provides free haircuts, trims, and shaves to all those sleeping rough on the streets of Los Angeles.

The inspiration for the foundation stemmed from Jason's own life experiences.

As a young man, the now-forty-nine-year-old had found himself living on the streets after becoming heavily involved with LA's infamous yet addictive music scene.

His addiction to drugs and alcohol quickly took over his life...

And, living on the streets, Jason couldn't find a way out.

But one recovery meeting was set to change his life forever.

Around fifteen-years-ago, Jason made acquaintances with the celebrity hairstylist, Chris McMillan at an addiction recovery meeting.

A keen hairdresser himself, Jason plucked up the courage to speak to Chris.

“I’d heard from someone that Chris was the ‘it’ guy when it came to hairstyling," he said in an interview with the LA Times. “It also didn’t hurt that he was the guy who did [and still does] Jennifer Aniston’s much-chronicled hair. So I approached him and said, ‘Hey, I heard you’re the man!’"

From this, Jason managed to land a part-time chair in Chris' salon one day a week...

But this quickly turned into a full-time job, and Jason found himself cutting the hair on some A-lister heads.

Editorial work in magazines such as GQ, Glamour, and L’Uomo Vogue soon followed...

As did work on press junkets for films and television projects. And one of these particular assignments led Jason to his most regular client and friend, British comedian James Corden.

And he now travels the world with the comedian.

But the pair have struck a close friendship in the process.

“What you realize when you spend enough time with Jason is that to each of his clients he represents a different thing," Corden said of his friendship. “It’s so much more than just grooming. He offers me a sanctuary on many days, a place where he allows me to forget about the hectic nature of doing a daily show. In a single smile, he can evaporate the stresses and strains that felt overwhelming just a moment ago."

But, despite all the glitz and the glamor of his new life...

Jason has remained humble to his roots. He launched his foundation, The Men's Groomer, whose mission statement reads: "A haircut can change a person's appearance, instill confidence, and allow someone to reach for opportunities when they thought life had passed them by. This is about second chances to anyone willing to do the work."

Over the years, Jason has continued to offer free hair cuts and shaves to those living on the streets.

Through the help of his foundation and his mobile hair salon, The Barber Truck, Jason has helped thousands of homeless people with both his barber skills and his kindness and sanctuary.

And last year, Jason opened up his first salon.

The Men’s Groomer Shop, on Lincoln Boulevard, is now open and fully staffed with barbers and hairstylists, all ready to cut the hair of the homeless.

Since the opening, Jason has been sharing some remarkable transformations.

It's amazing what a simple hair cut and shave can do, isn't it?

These men look completely different after their hair cuts...

And their transformations will undoubtedly do wonders for their mental health and wellbeing.

But there has been one transformation that stands out from the rest.

A homeless man known only as "Michael" was one of Jason's latest customers, and his transformation is shocking everyone.

Michael has been living on the streets for some time...

And struggles with substance addiction.

But here, he receives a haircut, a shave and a bite to eat...

All while Jason talks to him about his own similar experiences of life on the streets. Upon learning that Michael is thirty-years-old, Jason says, "Brother, I was thirty-four-years-old when I showed up for my life. I had nothing - I had warrants for my arrest, bad credit, I was 130lb, on crack..." And, while Michael looks stunned, Jason explains how he turned his life around, and how there is still hope for him.

His hair is cut, his beard is shaved...

And his face is given a much-needed scrub down. All of this pampering transforms Michael from being long-haired and dishevelled...

To looking like a model from the cover of GQ.

How is that the same person?

Jason shares a final photo of the pair together...

And the glee in Michael's eyes says it all.

What a truly remarkable moment. For more on the kindness of strangers, keep scrolling to read about the California vet who is treating the pets of the homeless for free...