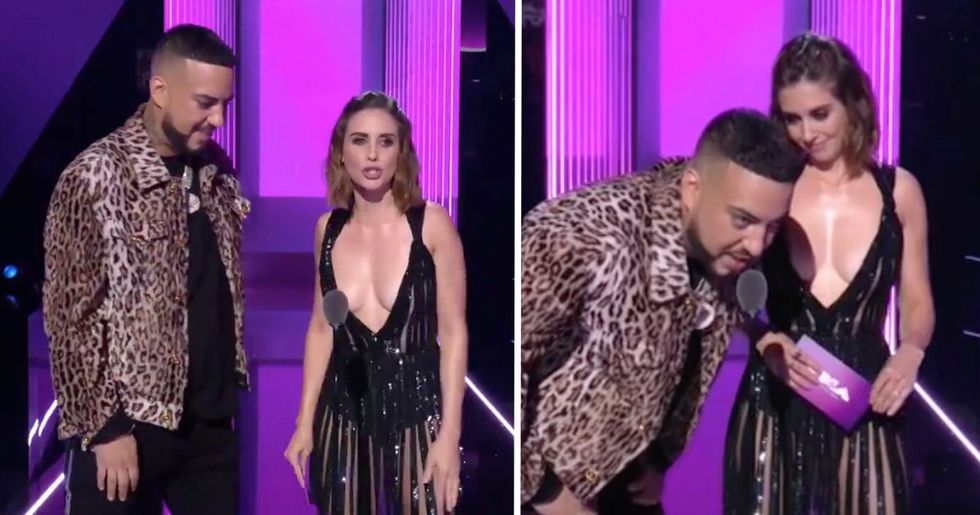 During the course of the evening, we saw performances from several celebs, including Taylor Swift, Camila Cabello, Lizzo, and Missy Elliott, as well as watching some of the industry's biggest names bag some pretty huge awards.

And, of course, there a plethora of celebs who present these awards, one of which was Glow star, Alison Brie, who presented alongside rapper, French Montana. But several viewers have slammed the rapper, accusing him of staring at Alison Brie's chest while they stood on stage together.

Keep scrolling to take a look at the video for yourself.

There were many A-listers on hand during the evening to present these awards.

Queer Eye star, Jonathon Van Ness; acting legend, John Travolta; and reigning soccer champion, Alex Morgan, were amongst the celebs that took to the stage to present the winners with their awards.

One of the hosts was actress, Alison Brie.

The star initially took to last night's red carpet donning a black cocktail dress, before heading to the stage to present the "Best Latin" award.

Brie is known for her role in Netflix's popular series, Glow.

The actress stars as Ruth Wilder, an out-of-work actress who enters the world of female wrestling, in the hit Netflix series, which is currently in its third season.

She presented the award alongside co-host, French Montana.

The rapper, whose real name is Karim Kharbouch, stood alongside Brie to present J Balvin with the award, who came out on top for the second year in a row.

He's also Khloe Kardashian's ex. The pair dated back in 2014, in a romance that lasted just 5 months.

During last night's awards, Brie and Montana got political.

Montana, who was born in Morroco, gave a brief pro-immigration speech. The rapper said: "I'm so proud to pronounce this award because as an immigrant I feel like we are the people that make this country, and I feel like I want to be a voice." Brie then chimed in, saying: "What's happening to immigrants in this country is unconstitutional and frankly disgusting."

But the rapper has come under fire over how he conducted himself.

In particular, viewers noticed that he was staring at a certain area of Alison Brie's body.

Viewers slammed the rapper for visibly staring at Brie's chest.

While the pair were presenting, viewers were shocked to watch a "drunk" French Montana unable to take his eyes off Brie's chest area.

The internet had some pretty strong reactions after watching.

Looks like people were less than impressed with the rapper, with many claiming that he was very drunk while presenting.

What do you think? Take a look at the video for yourself...

"I'm so proud to present this award. As an immigrant, I feel like we are the people that made this country and I fe… https://t.co/JTPHXTIOeB
— #IAmAnImmigrant (@#IAmAnImmigrant)1566866393.0

His eyes definitely do wander... This, of course, isn't the only time that women have been subject to things like this and celebs have been known to shut men who treat women like pieces of meat down. Keep scrolling to see how some of our fave stars have gotten the last word, addressing the issue of everyday sexism towards women in all aspects of our society.
70%