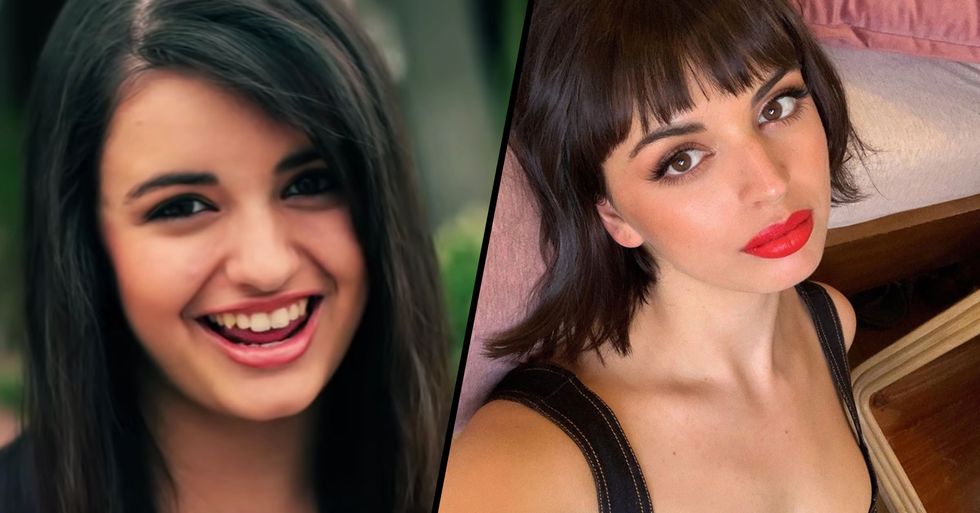 Rebecca Black, the face and voice behind the 2011 YouTube track, "Friday" has this week revealed that she identifies as queer.

Keep scrolling for the full story, and to watch her interview for yourself...

Hands up if you remember this girl.

It's Rebecca Black, the one-hit-wonder teen who rose to fame after releasing "Friday" back in 2011.

"Friday" still haunts most of our memories...

The slightly nauseating track, which has now raked in an eye-watering 141 million views since its release on March 14th, 2011, is about a typical school day on a Friday (shock). If somehow, you haven't seen or heard the song, here it is above - But watch at your own risk.

Purely for how s**t it was.

The song is simply awful.

There's no denying it. The beat is basic, the lyrics are meaninglessly shallow ("I see my friends, kicking in the front seat, sitting in the back seat, gotta make my mind up, which seat can I take" springs to mind...), and Rebecca's voice is hideously autotuned.

And not to mention the music video...

Which makes for some pretty unpleasant viewing. Though let's be real - Just how good can a low-budget video full of awkward teens get?

And, as a result of the cringe-worthy track...

The then thirteen-year-old Rebecca found herself being ridiculed and humiliated online.

But, as the song's views grew into the millions...

So did Rebecca's fame.

Rebecca rose above the online bullies...

And was able to at least enjoy some of her fame, attending award shows and red carpet events, winning a Teen Choice Award, hosting YouTube Rewind, and even briefly collaborating with Katy Perry.

Rebecca disappeared from the internet's radar and has lived her life out of the public eye.

But what exactly is she doing now?

Amazingly, Rebecca, who is now twenty-two-years-old, hasn't given up on her music career.

She has continued making music throughout the years...

Though she admitted it was a struggle to find herself. “I was kind of a later bloomer, personality-wise," Black told LA Magazine. “I feel like because of everything that happened with "Friday" and growing up on YouTube, like, I experienced so much, but I was a bit emotionally stunted. And when I moved out here, I started working with a team that actually gave a s**t about me."

And she has gone on to release a number of her own tracks...

The songs “The Great Divide," “Foolish," “Heart Full of Scars," and “Satellite" were included in Black’s most album, RE/BL, released last year in 2018.

It's been one hell of a journey for the young woman.

“That has been an ongoing process of me really trying to be patient with myself and them being really patient with me as I figure out how the hell to go from being this girl that people really didn’t like and got this really weird start to like a person who believes in herself and can work with other people and confidently walk into things like this," she explained.

And not to mention that she looks completely unrecognizable now.

She can't be the same girl, surely?!

And she has gradually become somewhat of an influencer over the years.

And has done promotional work for companies such as 3 Musketeers and Dunkin' Donuts.

But there's one thing that she's always kept hidden from the public...

And that's her love life.

The young woman has dated several people in the past...

But their identities have all remained unknown.

But now, Rebecca has finally opened up about her romantic life...

By coming out as queer.

She made her shocking revelation on the "Dating Straight" podcast...

The singer revealed that she had recently broken up with a woman, before admitting that she identifies as queer.

She said this is how she's identified for the last couple of years.

Speaking to the show's hosts, Jack Dodge and Amy Ordman, she explained:
"I made a conscious decision to not, like, 'come out'. People started asking and I stopped not responding. I'm still in the process, it feels like."

Rebecca explained how every day is different.

"Every day is different, it's something that over the past few years I've obviously been having a lot of conversations with myself about... Some days, I feel a little more on the 'gay' side than others."

She's dated people of both genders...

And is still working out what exactly it is she wants in the future. "To me, the word 'queer' feels really nice. I have dated a lot of different types of people, and I just don't really know what the future holds."

And as for any current dating prospects?

Well, Rebecca isn't ready for a relationship just yet... And even if she was, the lockdown has put a stop to any potential date plans. "I don't really want to date right now, even if I did, I have no choice. Unless I want to get on Raya and Skype date them? No."

Coming out can never be easy, especially for those in the public eye. Keep scrolling to read about another famous face who recently came out as queer...