Fried Chicken Fraud: Restaurant Gets Caught Passing off Popeyes Chicken off as Their Own | 22 Words 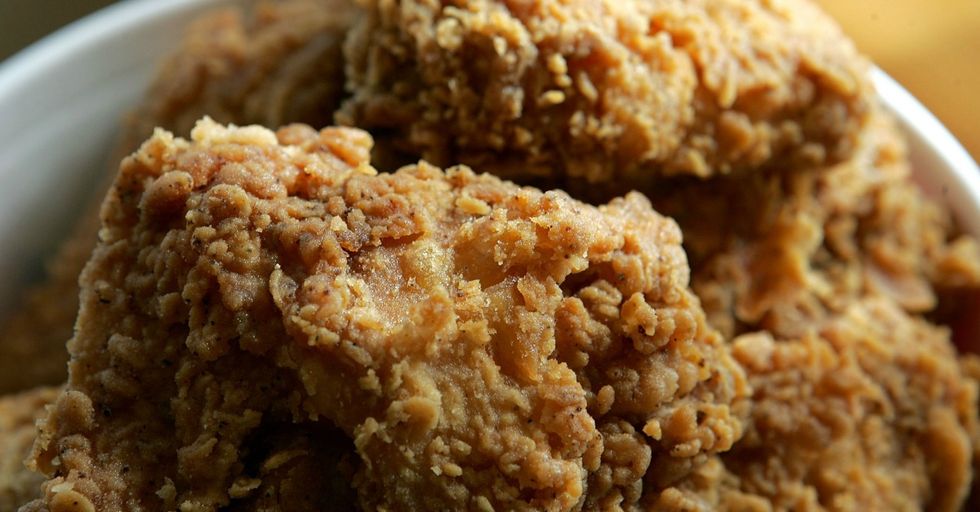 Fried Chicken Fraud: Restaurant Gets Caught Passing off Popeyes Chicken off as Their Own

For the minuscule sum of $13.95 a pop (which is really more like $16 with taxes, if you think about it), you too can enjoy the *expensive* taste of down-home flavor. Or so Sweet Dixie Kitchen claims. With such highfalutin marketing, you'd think the chefs at Sweet Dixie had daisy-duke-wearing farmer girls hand-selecting each and every strawberry. That, unfortunately, is not the case.

Yelp user Tyler H. of Los Angeles was hungry when he stopped by Sweet Dixie Kitchen for a bite.

To his shock, he noticed restaurant workers carting in large boxes of Popeyes. At first, he thought they might have been having a team dinner, but something in his gut told him otherwise. On a hunch, he decided to order chicken and waffles, and lo and behold, the meal he got tasted stale and overcooked. It also tasted just like Popeyes.

Horrified, Tyler H. complained, and was promptly refunded for his meal. When he posted a review to Yelp about the restaurant's unsavory antics, he received a shocking reply.

Sweet Dixie's owner, Kimberly Sanchez, posted a defiant reply explaining that the restaurant "proudly serves Popeyes tenders," and further adding, “if we run out of our own slow-cooked pork, in order to keep our menu intact. I will order a batch of carnitas from the best place in Long Beach." Sanchez also stated that the restaurant isn't set up for frying. This excuse, by the way, is laughable at best.

Yelp reviewer Kevin S. of Long Beach broke down exactly why this is all so ridiculous in an epic Yelp post.

"Despite what you believe," Mr. S stated in his post, repeated verbatim here, "this isn't an ethical practice in the restaurant business and is a cardinal sin...  You can not re-purpose a signature main dish item from somewhere else and use it as a main ingredient in yours and say its your dish without getting proper consent from the establishment and notifying your consumers where it is coming from.  No other legitimate successful restaurant does this.  I have been in the industry for a while and can tell you that from personal experience.  This would be the same as me taking a BIg Mac, replacing the buns and sauce on it, calling it the Big Kevin, and then marking it up 200 or 300%.  That isnt right." You tell 'em, Mr. S. Also, remember these sandwiches cost around $16 apiece all told.

That aside, even if you wanted to give Sweet Dixie Kitchen the benefit of the doubt, their mission statement literally states, "we stay faithful to our Southern roots — big flavor with conscious healthier cooking methods."

At least it did state that. This wording was swiftly taken down from the website when the scandal broke. Besides the fact that Sweet Dixie Kitchen lied to its costumers and then did a defiant about-face when it was found out, there's a another issue the insightful Mr. S. brings up in his post (repeated verbatim): "Using fast food products is not the same as using temperature controlled, legitimate, and safe vendors/food distributor. How long has those tenders been sitting out before you bought them? You open at 8am so that means you must go the night before and get them. So they go from cooked(possibly not even fresh), to chilled over night, to baked on demand. You are going to get someone sick!" Popeyes, call your lawyers ready...