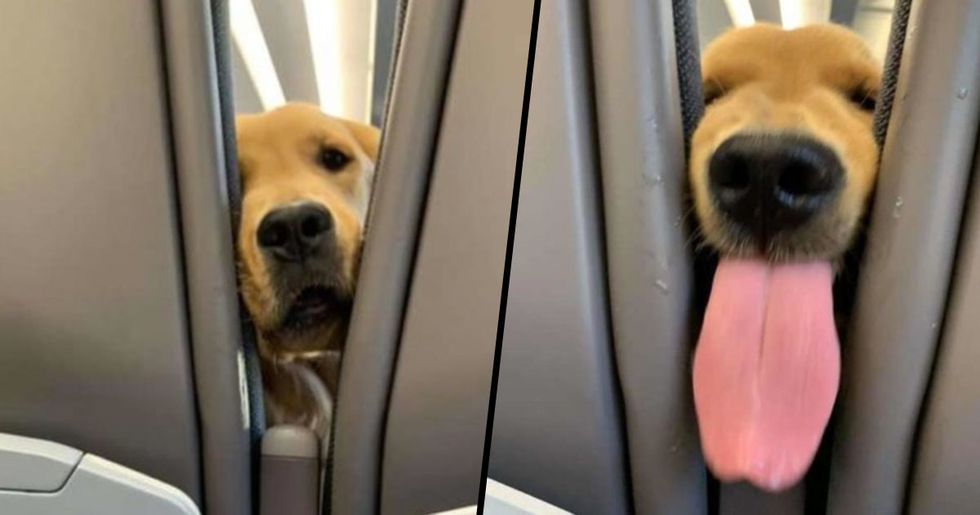 Friendly Dog Knows How to Entertain Passengers on Long Flight

Ever got on a long haul flight, taken out your overpriced airport Vitamin Water and candy, to turn around and discover that your seat buddy is harier than Nev from Catfish?

Now I'm not talking about a grizzly fellow, I'm talking about a bonafide dog. I know what you're thinking: "Whaaat, don't dogs get shipped in cargo in scary-looking prison cages like the ones I've seen in the movies?" Not always. And having a dog above board can actually really improve the journey.

You might think a dog would be a nightmare on an airplane, howling through the entire flight, but, as these cute pics will show, some dogs can actually improve the long haul experience.

Dogs and planes go way back.

Did you ever hear about the British television show, Come Outside? My British cousins were obsessed with it and brought the VHS over when they came to stay. I think this television series about a lady that traveled around in her private plane with her doggo going on adventures was the first time I saw a dog on a plane. Granted, though, it was just a show.

I mean, in reality, it does seem a little silly...

Dogs aren't human, right? Surely, when we go to stay with family and friends out of state, we should just get someone to watch them? Taking your dog with you on vacation seems kind of odd...

This is what I thought happened when you took a dog on a plane...

Caged up, set aside along with the long haul luggage and mint condition dolls ready to be sold off (...sorry watched Toy Story 2 again last night).

As it turns out, you can keep your doggo with you at all times.

Wahey! This changes everything. I sure wouldn't be leaving my pooch with the weird lady next door every time I went out of town if I'd known that. Sorry, Banjo.

But a dog on a flight would be a nuisance, right?

Stealing all those in-flight peanuts right out of my hand! Bursting my neck cushion with its rabid teeth... oh and the drooling. No thank you.

There's only one dog I want to see on my flight...

And that, my friends, is Snoop Dogg.

I mean, that is kind of cute though.

Granted, if your dog is well trained...

Taking them with you on your travels could mean an extra pair of hands - or should I say "paws"... (dad joke).

A big dog needs walking loads of times a day. What's it going to do on a long haul flight? Do laps around the cabin? Is there a doggy treadmill onboard?

You cannot open the window on a plane.

It just can't be done, you'll get sucked out of the plane and die. But dogs love putting their heads out of the window, right?

Where do the dogs pee?

I mean, that's what everyone's thinking, right? Do they do a sneaky tinkle under a snoring passenger's seat? Do they do it in a water bottle? This remains a mystery to me.

Hey, this is 2019, right? No prejudice, please. Dogs just want respect like everyone else. They're not just peeing, slobbery animals that don't know how to hack a long haul flight... I mean, you should see some of the people I've been sat next to on a long haul.

A well-behaved dog can make the perfect travel companion.

Wait until you get a look at Huxley, the well-behaved dog that took his first-ever flight from London to Ibiza...

Passengers on the Ibiza bound flight were initially startled when they noticed Huxley.

Huxley abandoned his mom to sit in front.

According to Huxley's mom, Ursula Daphne Aitchison, "He was sat in the seat next to me but got in a mood which he often does when I don’t pay him enough attention." Speaking to The Dodo, she explained that her dog quickly changed his tune...

“He quickly changed his tune when he heard me eating my crisps."

Dogs do love chips, it's a scientific fact. My dog's favorite chips are cheese and onion, which, coincidently, is my favorite too.

Huxley found it difficult to get hold of the savory snack...

Much to the amusement of the passengers, Huxley struggled to squeeze through the gap between the seats to get hold of mom's crisps.

Huxley's funny faces amused everyone around.

Look at that face!

I wouldn't be surprised if he wasn't signing a sponsorship deal with Pan Air as we speak. He could be the new face of travel.

Dogs are known to relieve stress.

What a perfect idea for the anxious flyer: Get yourself a travel dog. Just make sure you have a bag of chips to keep them on your side... now a hungry pooch, that is not something you wanna see on board a long haul flight. Speaking of flying, continue scrolling to read about the passenger that opened the flight emergency door because she was too hot. Now Huxley certainly had more common sense than her!