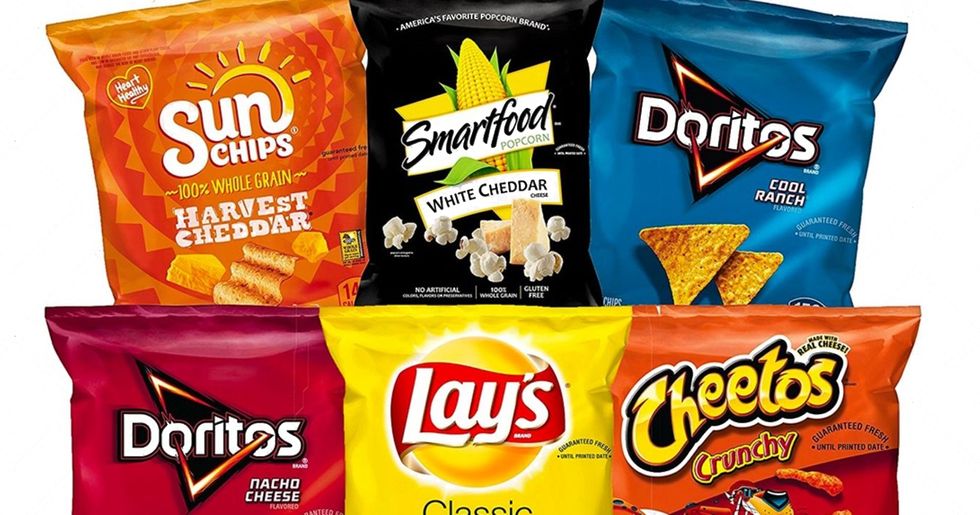 I do not think it is too much to say that Frito-Lay is the king of the chip world. The company is responsible for not only Fritos and Lays but also Doritos and Cheetos. And every variety therein. Sun Chips and Tostitos. Munchies and Funyons. Rold Gold pretzels and Ruffles chips too. Smart Food Popcorn and Stacy's pita chips fall under the Frito-Lay umbrella too. In short, Frito-Lay is responsible for much of our daily snacking.

But we are going to take it back to basics for a second and talk about the classic Frito-Lay snack box. You know, the ones your office gets and that you try to avoid visiting all day but give up around 9:30 a.m. because you're bored. Recently, someone posted a video in which a bunch of dudes argue, while ranking the chips that come in the classic snack box, and the internet immediately went wild.

At the end of the day, we all just want to eat chips.

I think we can agree on that. The only question is, what order do you ideally want to eat the chips in, and is that the "correct" order?

Actor and comedian Kevin Fredericks recently posted this video, in which he and a bunch of friends share their ranking of the chips in the Frito-Lay snack box:

For me personally, it all depends on the day! But I'm going to say my ranking is... Nacho Cheese Doritos, Cool Ranch Doritos, Cheetos, Fritos, Classic Lays, BBQ Lays. Although, I might choose Classic Lays if I'm eating them with a sandwich, and sometimes I go for Cool Ranch even when Nacho Cheese Doritos are still available. So I don't know, man! Don't quote me on this!

The people of the internet immediately began chiming in with their personal rankings...

All I know is that BBQ Lays definitely aren't that high on the list for me. They are way too greasy.

This guy doesn't even want to look at Fritos.

I think Fritos are plain, and often they are way too salty, but I'm not offended by them the way this guy clearly is.

People started getting mad about other people's rankings!

But which Doritos is first and which is second? This is important. And sorry, but Cheetos are great.

Then, Captain America himself weighed in, and this blew the lid off the whole conversation.

Leslie Jones of SNL was not playing around when she shared her ranking.

I agree, Leslie! Nacho Cheese Doritos are classic, nostalgic, and just dang delicious. I'm not mad about the rest of her list, either.

The Roots' Questlove soon got in on the conversation:

Interesting, interesting. I don't know that I would have thought of Questlove as a Cool Ranch guy, but this just goes to show that you don't always know people.

Journalist Yashar Ali then boldly shared the "correct ranking" (according to him).

Woah, woah, woah, Fritos first?! What are you doing, man? This is the same guy who won't eat tomatoes, like, ever (he's very open about sharing his food opinions on Twitter).

Some agreed with Ali:

I'm not slamming Fritos. They're fine. They just do not hold a candle to Doritos. I'm sorry. It's just a fact.

Others weren't so fast to hop on the Frito train:

It's OK to like Fritos. It's even OK to love them. But you cannot honestly believe that they are a better chip than a Nacho Cheese Dorito. Come on.

The conversation is far from over. People keep offering up their strong opinions.

I respect the love for Classic Lays, but this is totally the list of a very white man. Sorry not sorry.

Another vote for Fritos first...

I don't know what it is about BBQ Lays, but I have to agree with this guy. They just don't do what they are supposed to do, as a chip.

I like the friendly discourse, the feisty back-and-forth, but when people come in hot saying their order is the only "correct" order, we have a problem.

Sure, go for Cool Ranch first. What do I care? But then BBQ Lays?! Then Nacho Cheese Doritos? Sir, what are you doing?

I'm sorry but be an adult and refer to them by their flavor, not their color. This is an adult conversation we're having.

This person has an interesting viewpoint.

I totally get it. But you don't think Cheetos or BBQ Lays make your breath stinky? I think there's more to taking into consideration here.

This is how it goes, according to this person:

This ranking doesn't super offend my sensibilities. I understand that some people just aren't into Cool Ranch.

This person has very strong negative feelings about Cool Ranch.

And that is her prerogative. But what I'm most offended by is her ranking of BBQ Lays over Classic Lays. No thank you.

This guy gets what I'm talking about.

He would eat the box, the cellophane, and even a human hand before he would touch BBQ Lays. I'm not saying they're that bad, but they're kind of that bad.

There are no wrong answers here.

But this is wrong. This is bad information. In no world are BBQ Lays better than Cheetos. In no world.

This guy just really went for it, huh?

I don't know if anyone else put BBQ Lays at the top of their list, but I fundamentally disagree with anyone who did.

Not to mention, the Frito hate is getting out of control.

Fritos would go great with a hot dog! On a hot dog even! What are you saying?!

Someone stopped the nonsense with this big ol' bag of truth.

Regular Fritos are plain, sure. Maybe they're even your least favorite of the bunch. But HOney BBQ Frito Flavor Twists are perfect.

And other Frito flavors are pretty good too.

These, the Chili Cheese Fritos... Frito has proven itself as a great base chip. It shouldn't be at the very bottom of anyone's list for this reason.

This person has some serious thoughts about this whole thing.

I think they're being unnecessarily harsh on Classic Lays... They are classic after all. But I personally prefer the Lightly Salted version. Those are perfect.

Finally, someone with some real experience steps up to the plate.

It's kind of true. In my office, Fritos, Classic Lays, and BBQ Lays were always the last bags left.

We got a Hot Cheeto stan over here, everybody.

I personally don't really like Hot Cheetos. They're hot, but they not super flavorful. But that doesn't matter right now. They are not even part of this discussion!

Frito-Lay itself got in on the conversation.

But the cowards wouldn't pick a favorite. I suppose they are right, though. The variety is what's important. The ability to choose your favorite is what counts.

Frito-Lay just got so much free advertising from this Twitter thread. Holy heck. Share this with someone and tell them your own personal ranking!