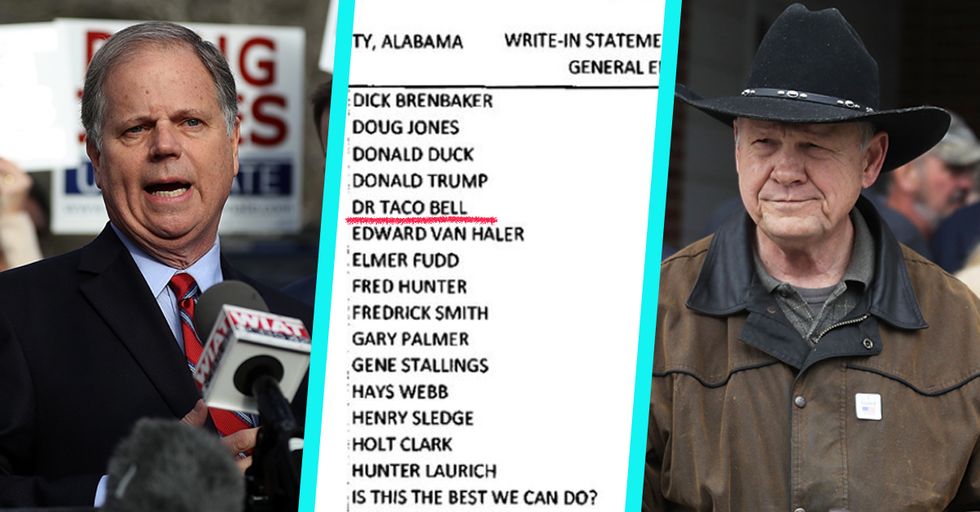 From Jesus Christ to Donald Duck, These Are the Insane Write-In Candidates From the Alabama Senate Election

Earlier this month, Doug Jones beat child molester Roy Moore in the election for the Alabama Senate seat. It was a historic win for Jones and one that was due mostly to black women showing up at the polls to cast their votes for him.

Obviously, not everyone voted for Doug Jones. Some chose to vote for Roy Moore (despite the fact that he had sexually abused multiple underage girls). And then there were people who didn't vote for Doug Jones or Roy Moore. For whatever reason, they chose to go a different route. A very different route, in some cases. Those are the votes we're discussing in today's story.

Doug Jones' win marked the first time a Democratic Senator has been elected in Alabama since 1992.

Despite Donald Trump's endorsement of his child-molesting opponent, Jones managed to eke out a win — but it was a very close race. It was made even closer by the write-in votes for people (and other entities) who weren't even running. Luckily, since the good guy ended up winning, we can now look at those write-in votes and share a laugh.

On December 28, 2017, the official records of the Alabama Senate write-in votes were released to the public.

And there are some real superstars on this list. We're happy that Doug Jones won, but we have to admit that we're kind of curious what would have happened if one of the write-ins had taken the election.

Here's a closer look at the list from one Alabama country:

The top write-in candidate? "Blank." We're assuming that means at least 37 people drove to their polling place just to vote for nobody. That's a pretty bold move. Although it's not quite as bold as voting for "Mickey Mouse," as six separate people did. And it wouldn't be an election without some write-in votes for Jesus. The Lord managed to pull down a solid 11 votes for Himself.

Our favorite from this section of the list is the simple "Nope" right near the top. It takes an impressive combination of complete apathy and caring jus enough to vote "Nope." But the votes Snoopy and Snow White are also quite great.

Here are a few more:

209 people in this county voted for Luther Strange, who was running against Moore for the Republican ticket. Some people just couldn't let him go, apparently. But the highlight from this list is absolutely "Dr.Taco Bell." The votes shown here were considered ineligible and therefore didn't count for anyone. But there were a few write-ins that did count for something...

Most surprising on the "eligible write-ins" list is Nick Saban. He's the head coach of the Crimson Tide. He got a solid 45 votes in this particular county. Roll Tide...we guess?

A bunch of people have taken to Twitter to share their favorite names from the write-in lists.

@DecisionDeskHQ "Jackson, My Dog" seems likes he might be a good, loyal candidate. And kudos to the person who voted for "Your Mom"
— Richard Zepfel (@Richard Zepfel)1514500565.0

You might think it'd be crazy to elect a dog to the Senate, but crazier things have happened! For instance, we elected someone who has sexually harassed and assaulted at least 19 women as the president! Wacky, huh?

Some are already planning on who they'll vote for next election.

We are so curious about what this particular vote actually said. Give us the info, Alabama! We can handle it!

Others did some hilarious math:

Hey, Donald Duck is a beloved cartoon character! He should be proud of the votes he was able to rake in.

These are perhaps the most telling write-in votes, though:

"A Normal Republican, Please," "Decent Republican Candidate" and "Is This The Best We Can Do" might be my favorites… https://t.co/uOQF7xjtVe
— Jessica Taylor (@Jessica Taylor)1514562479.0

Ah, what we'd give for an election with a "Normal Republican" candidate. It's been awhile.