From the Tame to the Insane: the Most Memorable Super Bowl Halftime Moments of All Time | 22 Words 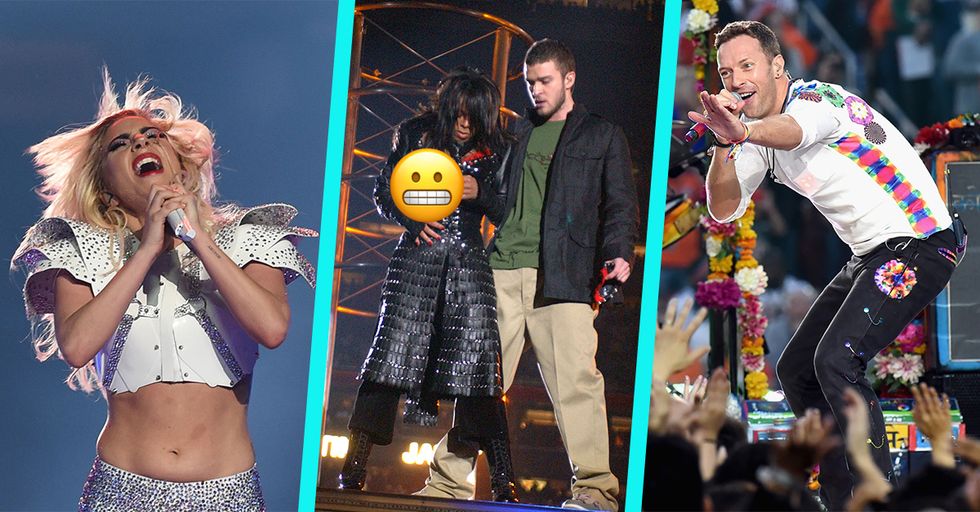 From the Tame to the Insane: the Most Memorable Super Bowl Halftime Moments of All Time

Justin Timberlake is about to get "Filthy" at this year's Super Bowl Halftime Show, taking the stage for the second time (third if you count the time with N'SYNC) since his 2004 revealing performance with Janet Jackson. We know JT is about to steal the show with his perfectly rehearsed boy-band dance moves, so to prepare ourselves, we're taking a look back at some of the most memorable halftime performances.

Michael Jackson's performance was truly one of a kind. He started the show by just standing there, for almost two minutes, completely still, all while the crowd went absolutely crazy. Not only did he sing "Billie Jean," "Black and White" and "Heal the World", some of his most iconic hits, but he also highlighted unity, hope and diversity in his performance. Every person in the audience was involved in a card trick and Jackson ended the show with bringing up children from all nations, highlighting different cultures and backgrounds, to stand on stage with him.

Combine the tropic weather of Miami with the eccentric and ridiculously talented Prince and you get an unforgettable performance that withstood some serious weather conditions. Prince did what Prince does best; puts on a show the audience will never forget. Despite the serious downpour that lasted his entire performance, Prince embraced the natural special effects that the rain added and let it magnify his performance of his famous hit "Purple Rain."

You have to see this one to believe it. The great Diana Ross has one of the most vibrant performances filled with hundreds of balloons, which is always a crowd pleaser. Classy, timeless and just really fun, it's almost impossible to not feel her energy when she performs. The only way to leave the stage after a performance like this is to hop into a helicopter and fly off into the air, leaving audience members in awe of her grandeur.

I don't think anyone could have picked out a more eclectic group of musicians. The good thing about this show is that almost every type of music fan could be satisfied in this plethora of performers. It was kind of all over the place musically, but overall a one-of-a-kind experience to scream out "Walk This Way" after fan-girling over "Bye, Bye, Bye". Oh, and Ben Stiller and Adam Sandler have a weird cameo if you're into that.

Queen Bey graced us with her power and poise in her ~electrifying~ performance that ended up shutting the power down at the Superdome in New Orleans. Before all the lights went out, she brought out the rest of the iconic Destiny's Child so they could perform as a group. The real miracle that night was how Bey didn't pass out after an entire 13-minute full-out dance routine all while belting those high notes in "Halo" that I can never hit.

This one wasn't entirely family friendly. The pop-infused duo had the crowd dancing for sure, but the last three seconds had everyone speechless. This is the great nipplegate of our generation, the moment Justin ripped off part of Janet's top, exposing a sparkly pasty placed on her breast. The cameras cut quickly and the lights faded but that image will probably be burned into everyone's minds forever. Some fans think he should bring her out for this year's performance for a full redemption.

Sweet, sweet Paul McCartney. A breath of fresh air after the 2004 scandalous Janet and Justin reveal. Paul soothes the soul while he sang classics like "Hey Jude" and "Drive My Car." Family friendly and fun, Paul brought the peace and left the scandal for a classy and enjoyable performance.

Honestly, this was kind of a mess, but a mess covered in glam and glitter. Madonna has so much energy and power it just kind of explodes and leaves a weird but amazing memory of her. She brought out Nicki Minaj (how do they know each other?), M.I.A, CeeLo Green and LMFAO. Plus, everyone was dressed like glamorous gladiators, so yeah none of it made sense. Oh and M.I.A. flipped off the camera to top it all off. At least it wasn't boring.

Sometimes I feel like whoever is picking the combination of artists for the halftime shows is truly just pulling names out of a hat. As weird as this combination sounds, it was actually quite beautiful. The whole performance highlighted different nations by waving their flags and celebrating different cultures through art, costumes and colors. Phil Collins sang that Tarzan song we all love, "Two Worlds." It kind of felt like a Disney parade mixed with a Cirque du Soleil performance, if you're into that sort of thing.

There was so much going on in this performance, it was kind of awesome. A giant lion, dancing palm trees, Missy Elliot slaying everything and anything in her way, Lenny Kravitz killing his guitar solo, oh and Left Shark stealing everyone's heart. The Left Shark had quite a rough time keeping up with the rest of the sharks in the dance routine, but left everyone falling in love with the way he tried his best. Fun and weird, Katy Perry definitely had everyone's attention; why should we have expected anything less than her dressing like a beach ball?

Fire, guitars and leather pants; now THAT'S an epic halftime show. The Rolling Stones kept it awesome by keeping it simple; no balloons, no one flying in from the ceiling, no scandals. Just their amazing music and a dedicated crowd. Their presence on stage is enough to keep the attention of every viewer, whether you were watching at home or if you were head-banging in the crowd.

It was a beautiful day, indeed. This U2 performance brought pure joy and some serious healing to football fans and Americans throughout the country. The performance included a showing of every single person's name who lost their life in the 9/11 terrorist attack that shook our country. It was hard to not tear up during this performance. U2 fan or not, this was easily one of the most memorable and touching halftime show performances to ever happen.

Lady Gaga flying in through the roof of the NRG Stadium in Houston, Texas...what could possibly be more amazing than that? She was literally doing backflips through the sky like some acrobatic professional. Gaga can't be stopped and her performance was basically flawless. Oh, and she gave us one of the best gifs of all time to enjoy for all of eternity.

I truly underestimated Coldplay's performance and for that, I am eternally sorry. These three powerhouse performers brought their own unique flare to the stage; Coldplay brought the pop of color, Bruno Mars brought his passionate and unparalleled dance moves, and of course, Beyonce brought the power. So much talent on one stage made for an overwhelmingly fun performance that had everyone moving.

Three words: glowing morph suits. Weird blue, green and red faceless clones danced around the stage while the Black Eyed Peas attempted to perform to the best of their abilities. They were giving off a sort of futuristic vibe with the lights and the robot-like attire. Usher showed up, which was pretty cool and so did Slash, the guitarist from Guns 'N Roses, which was kind of odd. This is one Super Bowl Halftime Show I think we are all okay with leaving in the past.

Alright, Justin. We have all waited patiently enough for your new music to come out and now that you've got the supplies, we are just waiting for you to say something and dance, dance, dance the night away at the Super Bowl 2018.