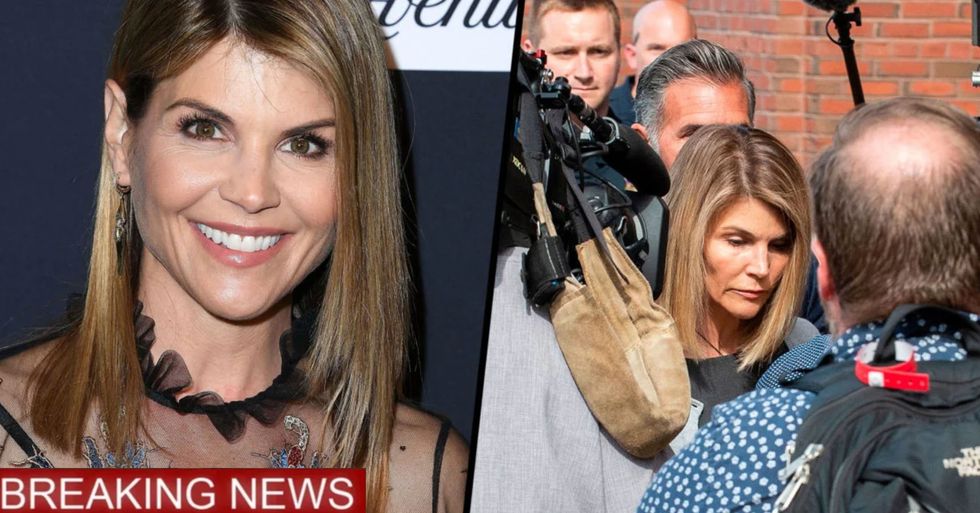 Loughlin, who came into the limelight playing Aunt Becky in Full House has been a constant face on our screens for over twenty years. So the news that she was embroiled along with her husband, Mossimo Giannull, in charges of fraud, shocked America.

It seems the pair have now pleaded guilty to the accusations. This is a breaking news story and will be updated accordingly.

Keep scrolling to find out all the details.

Things have not been going well for Lori Loughlin and her husband.

After a turbulent few months brimming with new evidence, the pair have now pleaded guilty to the scam that split the nation. But what was unexpected is the length they will be serving for their crimes...

You all remember Lori Loughlin from Full House, right?

The family-based sitcom, Full House was a huge success - not only did it springboard Loughlin's career but it was also Mary-Kate and Ashley Olsen's breakthrough. Full House ran from 1987 until 1995. Loughlin was there through it all, playing the beloved Aunty Becky.

She became a household name and was on our screens for years...

Which is why the world was shocked to find she'd been charged with fraud last year for her part in the infamous College Admissions Scandal.

Her career has fallen apart...

It's safe to say that her life is truly on a downward spiral...

The star has since been dropped from spin-off, Fuller house.

In 2016, Netflix decided to make a spin-off of the original sitcom and call it Fuller House. A lot of the old cast returned, including Aunty Becky and her husband, Uncle Jesse played by John Stamos. However, since the admissions scandal, Netflix has dropped Loughlin. Fans are still not sure how Netflix is planning to explain her character's absence from season 5.

The actress has also been dropped by the Hallmark Channel.

The Hallmark Channel was the first to sever ties with Loughlin after she was arrested for the admissions scandal. In March 2019 Loughlin was dropped by Hallmark and her scenes from season six of When Calls the Heart are being edited out.

The social media influencer had a lot of advertising contracts with beauty brands. She was dropped by Tresseme and french beauty company, Sephora, who were quick to distance themselves from her once the scandal broke.

The investigation is still ongoing. But it is widely understood that the couple paid $500,000 in bribes to a coach at USC to give places to their daughters, Olivia and Bella, under the guise that they would be part of the athletics team. They are currently on a one million dollar bail, awaiting charges.

Olivia Jade is not facing any charges.

According to her father's court hearing, Olivia Jade had found the USC application confusing and had allowed someone who is facing charges to fill it out for her.

The worst part? Olivia Jade wasn't even bothered about going to college.

One of the things that have infuriated the public with this case is that Olivia Jade clearly wasn't bothered about her education. Simply because the family is incredibly rich they felt as though they should get everything, even a sports scholarship, which would have to be taken the place of someone who actually deserved it.

In a revealing YouTube video, Olivia Jade had even told her many fans that she wasn't really bothered about going to college. Before the scandal had broke, she posted a video in which she talked about starting school in the fall. She said: "I do want the experience of like game days, partying ...I don't really care about school, as you guys all know."

But her mom and dad were insistent.

Which of course, has backfired massively.

The Loughlin-Giannull clan had no idea they would get caught out.

It is pretty clear that Loughlin and Giannull are facing time, nevermind the effect this has had on Loughlin's acting career and Giannull's fashion empire.

Felicity Huffman famously got sentenced to fourteen days in jail for her part in the scandal.

Another famous face in the college admissions scandal was actress, Felicity Huffman. The star pleaded guilty and was sentenced to fourteen days in jail and ordered to do 250 hours of community service.

But Loughlin and Giannull took a different route...

It's safe to say the family is not popular right now...

Whilst there are plenty of people who feel sorry for the family, the majority of Americans have no time for these privileged criminals.

The social media influencer has carried on posting pictures on her feed which show off her privileged lifestyle. Her privilege once drew subscribers in, but now in reaction to the admissions scandal, her wealth and spoiled lifestyle only serve to further condemn her.

The comments are not kind.

Olivia Jade's Instagram was once flooded with warm messages from her loyal followers, who both envied her and wanted to be her friend at the same time. Now, it's a very different story.

Which is why many were surprised to see her return to Youtube.

It seemed that despite knowing she would receive a whole load of backlash, Olivia Jade couldn't stay away from her YouTube channel.

As for her parents...

It seems they're having to face the reality of being banged up, and Loughlin appears to have gone to extreme lengths to prepare...

She may be looking at up to forty-five years in prison...

But of course, we all know there's pretty much zero chance she'll actually serve that amount of time.

But she's taking no chances.

“She’s knuckling down, learning the lingo and practicing martial arts to give off the impression she’s tough and to ward off potential bullies," an insider revealed, noting that Lori, 55, “knows there will be plenty of them in federal prison," a source told RadarOnline “Prison is going to be sink or swim and Lori doesn’t intend to sit back and take the abuse without a fight," the insider told Radar of the possibility Loughlin could spend up to 45 years in jail if convicted on all charges."

“Besides the physical training she’s getting lots of advice from prison professors on how to earn one’s keep behind bars," the source said. “It’s a sure sign she knows deep down she’s facing an inevitable stretch and will need to be prepared."

And she was right to prepare herself because, after a lengthy process, she and her husband have now pleaded guilty to their crimes.

The US Attorney's Office in the District of Massachusetts revealed the news today.

But weirdly enough, they will not be receiving such a harsh punishment.