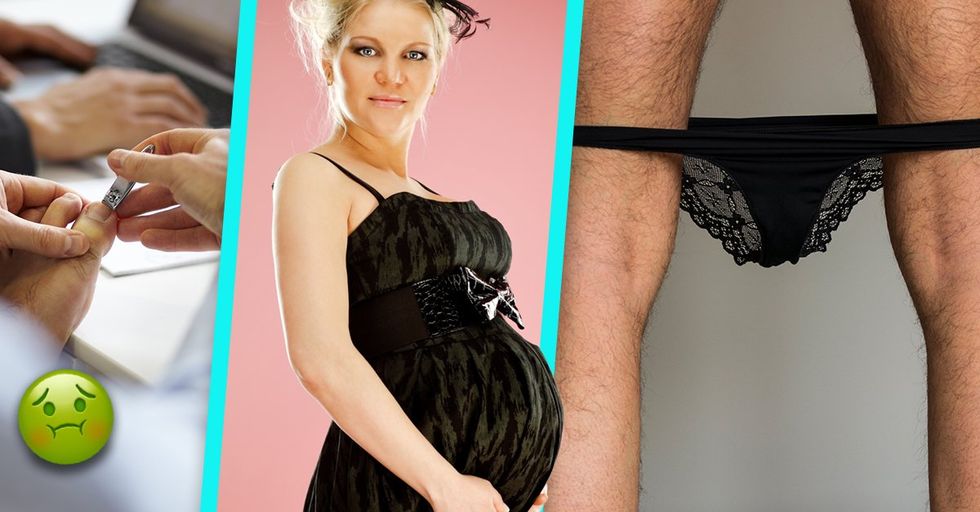 The Funniest (But Understandable) Reasons Real People Ended Their Relationships

There are 50 ways to leave your lover, which is terrific because there are a million reasons why you might want to. From horrific blind dates to awkward moments to creepy possible murderers, the dating scene is fraught with cringe-worthy moments. We've collected 25 of the funniest, pettiest and weirdest reasons relationships didn't work out.

A note to guys: yes, it's nice to compliment your date on her appearance.

BUT, when giving a specific compliment, acceptable parts include eyes, hair, dress, perfume, and that's probably about it on a first date. Once things are moving along you can comment on lips and other more intimate parts. There is no point in a relationship where you may compliment a person's veins.* *Unless you are a phlebotomist and the "relationship" is that you are drawing blood from a patient.

Sometimes he's not the problem, you are.

Somewhere out there, there is a sister story to this one. A man is telling people of the worst date he ever went on where a girl threw up on him at McDonald's. Humor is a dangerous weapon.

Some differences are too big to overcome.

There are two types of chicken eaters: those who politely nibble, and those who are serious about eating their freaking chicken and leave nothing behind. These types are fundamentally incompatible.

Social media is practically tailor made for casual stalking.

But you have to be careful! One wrong move and you're stuck with abject humiliation, forever outed as a stalker. Sure, everybody does it, but plausible deniability goes a long way to maintain an image.

Dating while pregnant must be incredibly hard. But how can any woman think that it's OK to surprise a date with that little tidbit? Will finding out you're in your third trimester likely turn off most Tinder dates? Yes. But you still have to tell them!

If there was a list of all the topics not to discuss on a first date, no one would ever think that 'the difficulty of cleaning your foreskin' would need to be on that list.

No. Just no. So much no. There is not enough no in the world for this.

There are those who believe in the five second rule, and those that don't.

Non-believers hear this story and are appalled and grossed out. Believers simply think about the kebab, how good it is, and what a damn shame it would be to waste it.

Scratch you in his sleep? That's a really weird thing to warn someone about. But not as weird as cutting his nails on a date.

The "hat flourish" should have tipped you off.

This story is full of gems. The guy can't eat foods that touch. It was soup!

Who can blame him for wearing his nicest pair?

Who doesn't pick out a pretty set when there's a chance someone else might see it? That's all part of the fun in dating.

Incredibly, the most awkward moments sometimes work out alright in the end.

Her worst date is his most embarrassing one. And now they can share the story forever because somehow they overcame the moment.

Can you imagine? You thank the waitress and the guy shouts out "YOU'RE WELCOME!" because you weren't acting appropriately grateful to him? Incredibly, she stayed for more drinks!

To each his own. I guess.

This one would probably be a deal breaker for most women. Where does the fetish go from there? We don't want to know.

How about the guy who wanted a refund because the girl didn't want to go out again?

He bought her a cup of coffee on their date. She declined his invitation to his house for a second date. He wants a refund. Uh, that's not how any of this works, dude.

For those of us who are tragically socially awkward, this could be any of us.

You don't want to talk about your sister's pubic hair. But now that you've thought of it you can't NOT talk about it. It's all like a slow motion train wreck and you are helpless to stop it.

It's nice when siblings get along.

But there is definitely too much of a good thing. This can't be real. Can it?

He's interested in yoga and art, so that's good?

Wonder what the yoga instructor would think of these drawings? Why are some guys so dang creepy?

Are you all picturing Bruce Willis as the dad here? What are the odds that this dad gets divorced and ends up remarried to the mom of another girl this guy dates? Throw in a couple of Christmases and you've got yourself a classic Hallmark movie.

On one hand, he can't help it.

But on all the other hands, the guys has enough of a problem that the girl's mother was involved! Eat some fiber, dude!

When you finally realize what it is that something reminds you of...

We can't help who we're attracted to. To some people, a vagina mouth might be very appealing. Those people might all be straight men or lesbians though.

You know there's no chemistry when one of you doesn't even realize you've been dating.

This poor guy. They dated for awhile before she realized what was happening.

Think of all the time we'd save if all people were as upfront and honest as Robert!

Wouldn't dating be simpler? "You do know I will act crazy in front of your friends because I'm irrational, possessive, and jealous. Just want to make sure we're on the same page." "I will send you unsolicited pictures of my genitals." "I will never be faithful." "I only date guys named Rick because I already have a Rick tattoo."

But his mommy always cut it up for him.

I bet his mom still does his laundry too. After all, it's right there since he lives in her basement.

OK, so "date" might be a strong word for this relationship. But still. This guy not only had his car stolen, but he had to tell people the story of how it was stolen. Serves him right.

Not all terrible dates belong to humans.

I wonder how he got her out in the end? Love. Ain't it grand?