The Funniest Responses To The 'Florida Man' Challenge | 22 Words 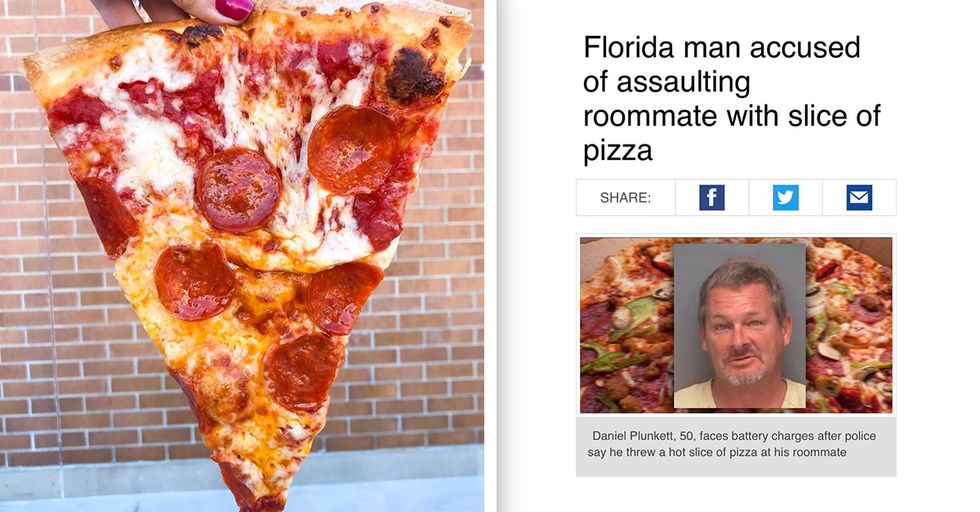 The Funniest Responses To The 'Florida Man' Challenge

Florida is one of those places that truly does offer something for everyone. If you're from the cold, gray Midwest like me, it can be a tropical retreat filled with sandy beaches, glittering waters, and a much-needed dose of Vitamin D. If you're a theme park junkie, it offers a variety of options ranging from four Disney parks to two Universal parks as well as SeaWorld Orlando and a plethora of water parks. But mixed in with all that magic is something that the internet has been quietly taking note of for a while now: A whole lot of crazy Flordia people.

So when a new online trend starting involving googling "Florida Man" followed by your birth month and day, the results were nothing short of spectacular. I've compiled the 30 best results from this hilarious challenge, so allow yourself to sit back, relax, and enjoy the ridiculousness that is Florida Man.

This one brings up so many unanswered questions. What Coldplay lyrics are menacing enough to be used as a threat? And did he actually get his pizza? Or was it just a police tactic?

Hey, at least the guy was being honest, right? It's not his fault that everyone misunderstood his very real murder threat.

Honestly, I get this. Especially in a place like Florida where the average temperature is 800 degrees Fahrenheit with 500% humidity.

This new type of Uber

Here's a lesson to everyone out there: Not having a ride to Hooters does not qualify as a 911-worthy emergency. I don't care how much you love their hot wings.

The fact that a sheriff had to make an official announcement not to do this means that it happened several times. And that pretty much says everything you need to know about Florida.

Of all the things to be attacked with, hot dogs are pretty low on the list of "most deadly". ...although, that depends on how old those gas station weiners were.

I'm going to go out on a limb here and assume that most parents would prefer their children not learn how babies are made from a man with face tattoos. But maybe that's just my own personal preference.

Sometimes, when the ramen craving strikes, you just have to go for it. Even if that means breaking and entering.

Leave this lizard alone! I'm sure he wanted no part in this crazy man's behavior.

I'm guessing the victim in this case egged his roommate on to the point where he smashed a piece of pizza in his face, thus gaining more pizza in the process. Brilliant!

First of all, don't do this. Secondly, how does a microwave even fit inside a microwave? Thirdly...WHY?!

If giving someone a 'wet willy' is illegal, then I've been risking arrest since age 10. My older brother can confirm this.

Sure, this is probably a good way to get someone to fight you. But it's also a great way to get yourself shot.

Well, that was quick. At least he probably got a free ride back to jail in a cop car.

@g_pratimaaa Well this is amazing. “Florida man faces charges for eating pancakes in the middle of the road.” https://t.co/TIRjauxUG1
— Daniel Greer (@Daniel Greer)1553131364.0

Look, a good brunch place is hard to find. This guy was clearly just fed up with the two-hour waits at his local pancake house and took matters into his own hands.

I can't say I'm surprised that his neighbors had this response. I'm really hoping he uses all organic gardening supplies, since the use of harsh chemicals while nude seems like a recipe for disaster.

Truth be told, this would probably be my reaction to a single beer, but I'm not a heavy drinker. Something tells me he chased this "one beer" with a whole lot of meth.

How did this guy know that this woman was making eggrolls in her house? Could he smell them from the street? Can we really blame him for wanting to get to those delicious-smelling eggrolls?

Is it just me, or does this sound like an exact plot from a 90's movie? This guy must have had some amazing skin to be able to pull this off.

Notice the Twitter user on this one. That's right. Even John Legend participated in the 'Florida Man' challenge. And his result is pretty spectacular.

What could this man possibly have done to deserve such a cruel and unusual punishment?! The horror!

I greatly appreciate the pun used in this headline. I'd also love to know how one goes about raising an "attack squirrel".

Those pesky vampires! Their dastardly plan was probably just to humiliating this poor, heroic man.

This has to be the most "Florida" thing to have ever happened. In fact, fast food workers are probably specifically trained on how to react to this type of situation.

Again with the alligators! I'm guessing this little fella is a pretty mean drunk.

And he was somehow surprised by this outcome?

I'm seeing a big 'naked' trend among these Florida Man stories. ...again, I blame the heat.

And lastly, this pièce de résistance

After reading a headline like this, you really only have two options. One, to be overcome with curiosity and demand to know more about what happened here, or two, to just take solace in the fact that learning anything more about it would just ruin it. It's better that it remains a strange, ridiculous mystery forever.