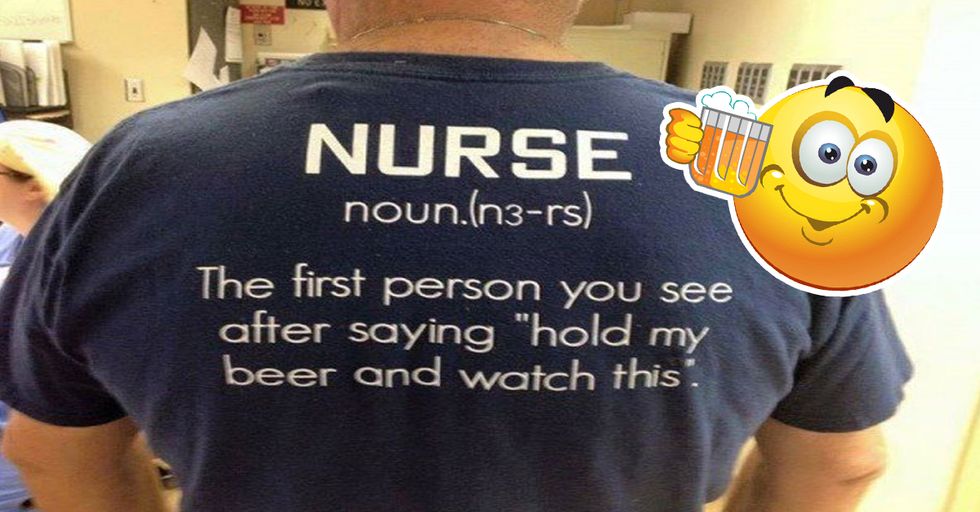 Sometimes the Hospital Is Actually a Pretty Funny Place to Be

Hospitals generally aren't considered to be "fun." Likely, you are there because you or someone you know is sick or suffering. Maybe someone you know is having a baby, which, while it is a very positive reason to be in a hospital, still comes with its own stress.

Doctors and nurses are doing the best they can to help those in need, but often times, that means hospitals remain stark, sterile, and serious environments.

Every once in a while, though, something happens in a hospital that makes you genuinely laugh! And you can't put a price on the importance of that. Whether it is a funny sign posted by the hospital staff, a patient with a particularly robust sense of humor, or just a ridiculous coincidence, sometimes there are moments in hospitals that can really put a smile on your face. And we have compiled a great list of them here!

Most people don't love the hospital.

It's not the most fun place to be. Thankfully, there is hospital staff and patients there who have wonderful senses of humor.

This is way too accurate. Of course, this only applies to the bros. Lots and lots of bros.

"Symptoms: I don't want children." "What makes the symptoms worse: Standing in line behind children." This is amazing.

When it's Christmas at the fertility clinic, you get lots of tiny sperm Santas. This is just about the best Christmas tree I've ever seen.

Oh my god. I love a ridiculously silly joke, and this one delivered. I bet it puts a lot of patients at ease.

I hope this doctor was ready to be punched in the face because there's no telling what I would do if I woke up after surgery and saw this standing over me. I'd think I was in The Twilight Zone.

This would not be much of a comfort to me if I saw this in the doctor's office. How about the book's sequel, How About We Don't Kill Any Patients At All?

This really does look like a fake building from a cartoon or something. Ah, yes, I must go to the Medical Building at 12345 Doctor Street in Feel-bettersville!

Yes, I love this. For some reason, the little sperm with a yarmulke on totally gets me.

I wonder if that's what the person came in to be treated for, or if it was such a victory because the two were totally unrelated. "She got stabbed in the arm, but lo and behold!"

How long is the wait?

Nurse Clare has a real bone to pick with Mr. Jesus Christ. He comes here complaining about how every time he touches water, it turns to wine, and it's like," why are you complaining?" That's an awesome skill to have.

You've got to love a doctor who makes dad jokes, but even more than that, gotta love a doctor with legible handwriting! I don't think I've ever seen that before.

This is so good! Why aren't all of the anatomy posters sassy? I'd pay way more attention to them if they all had some attitude.

This guy made his patient wear this through the whole physical, which was fine until he failed the eyesight test.

There is no occasion that the Fonz and his thumb can't make better. This is just science. Any doctor will tell you.

"A girl has no name"

Love the Game of Thrones reference on this family chart for the new baby. Does that mean her name is Arya, though?

No joke, I one hundred percent thought this was a picture of Drake dressed up for Halloween or something. I still do. He looks so much like Drake.

I hear they have great eggs. Sorry! I am so sorry about this joke.

Do not play a doctor on the Internet! That only leads to bad things. Bad, bad things.

I've never seen a guy with an arrow through his body looking more comfortable and casual like it's just no big deal. This is a perfect photo.

All you can hope for when you're going through a tough time is that someone will try to make you laugh! And then you'll feel better.

Get it?! Like, photo op, like a photo of an operation instead of a photo opportunity? Isn't it funnier when I explain my jokes to you?

You know, the nurses may think this is funny, but if I was handed this in a hospital, there's no way I'd drink out of it no matter how much they reassured me it was a joke.

This is brilliant, and whoever is in that room deserves a large pie with every kind of topping on it.

It's a wall of fame of all the fish hooks the hospital has removed from people! Hilarious. I wonder where this hospital is.

Leech on the go

Heck yes, I love this sign so much! If I saw this in a doctor's office, it would totally put my mind at ease.

Being in a hospital often entails a lot of waiting around! So, you've got to entertain yourself somehow. Share this with someone who might need a laugh!