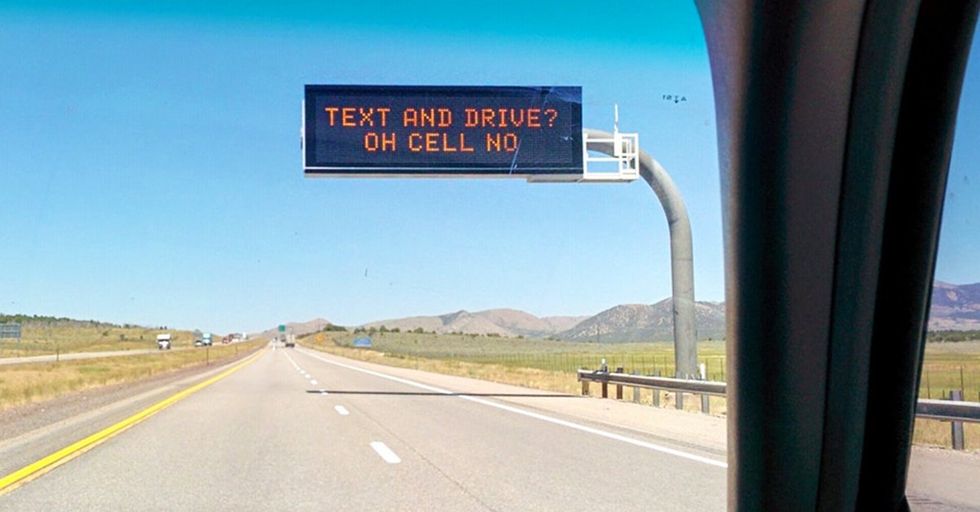 The Most Random Things People Have Seen While Driving

I love when people on the road try to make their fellow travelers laugh. Whether it's a strategically worded bumper sticker or a funky paint job, I'm all for it.

These are things that make you laugh out loud when you see them from the road.

It's hard to snap pictures while driving, so kudos to these photo ninjas who somehow did it, and enjoy this list of hilarity!

It's an actual chicken. Crossing the road. To get to the other side. As Kelly Clarkson would say, "Some people wait a lifetime for a moment like this."

OK, this isn't fair because just seeing this makes me well up with tears. What have you done to my soul, Toy Story?

Imagine being in a car when a giant minion with that face falls down on the road in front of you. Instant nightmares forever.

This taco truck opened for business when they were stuck in traffic! Now that's what I call making lemonade out of lemons, or you know, tacos out of ingredients for tacos. The next one is too funny!

This is a hilarious and clever way to say, "Don't run over our construction workers." Love it when they're in on the joke.

Hold up. This is amazing. That sign says, "When red light shows, wait here" for the cars in the road. But the woman walking also stopped at the red light. Ahhh so funny!

Yes, that is a truck full of wooden stakes that has "Vampire Slayer for Hire" written on the back of it. I hope this person is serious.

This guy was stuck in traffic, so he took out bubbles and started blowing them. Hey, whatever prevents road rage!

Cat in a hot tin car

That's a cat at the wheel. He's got his scratching posts, and he's ready to hit the open road and leave it all behind. The next one is for fans of a certain horror movie.

Remember the scene in Final Destination where the logs come loose and smash through the window of the car and the head of the driver? I think of it every time I see a truck like this, and apparently, so does everyone else.

What a trickster! This cop car looks just like a yellow taxi cab from the back. That's so sneaky!

Call me crazy, but this is like, the absolute worst place a deer could be feeding her babies. Someone call Baby Deer Protective Services on this doe.

Now that's something you don't see every day. There are two possibilities: It's a toy truck. It's a full-size truck that has been shrunk by Ant-Man.

I sincerely hope it was like, July when this person snapped this picture. This is the best. The next one is pretty punny.

This sign was spotted in Utah, and it's all well and good, but now I'm laughing too hard to see where I'm going!

Yessss these are the best! It's probably hilarious to watch it in motion.

OK, it's definitely Gandalf driving that van, but why? Isn't he a wizard? Can't he just like, teleport where he needs to go?

How ironic and perfect is this picture? Except for the fact that that whole truck is destroyed, of course.

This car has Pikachu's tail, which makes it a Pokemon! Love it! Share this with the person you're taking your next road trip with!