The Most Bizarre Things About British Culture | 22 Words 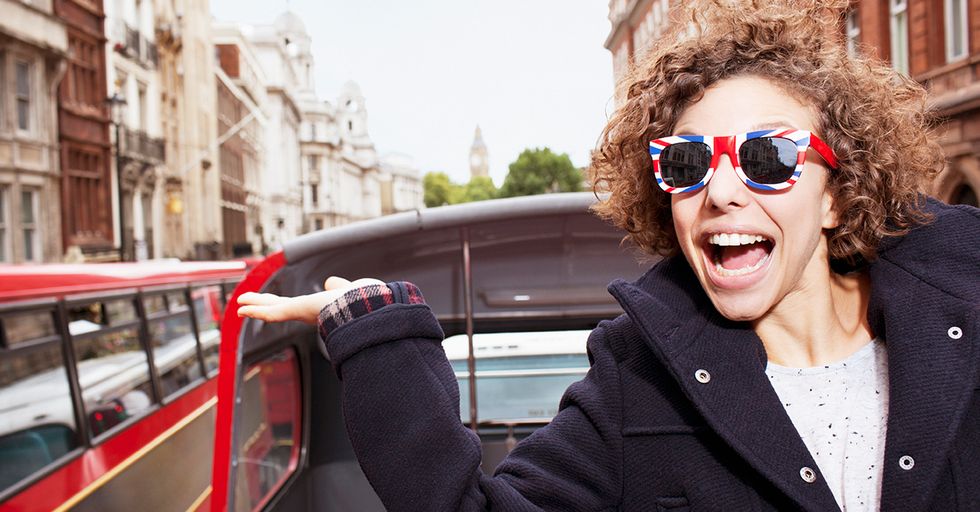 These Are the Funniest, Weirdest, Most Bizarre Things About British Culture

I studied abroad in Wales in college. Coming from the US, I just kind of assumed things wouldn't be that different in the UK. We both spoke the same language, right? Sure, some people spoke Welsh, but everyone there also spoke English, albeit with a funny accent. (They probably thought my accent was funny, too). For the most part, I imagined the UK like a more quaint, tea-obsessed America but with more tweed and different lyrics to My Country 'Tis of Thee. (Ok, we definitely ripped that one off, but it still feels so weird to hear the lyrics to God Save the Queen over our most famous patriotic elementary school song).

While a lot of things were the same, I was shocked by all the little differences that took some getting used to.

First of all their change is way heavier than ours. After living in Wales for 6 months, a handful of American coins felt like play money.

And their refrigerators are tiny! All five of my roommates and I were expected to share a fridge half the size of the one I had at home.

And the carpet in bars? You'd never see that in the US, but almost every pub in Wales had wall to wall carpeting that looked like it had been there since before America was even founded.

And here's the one that really threw me: they don't refrigerate their eggs! Apparently, it's actually weird that the US does refrigerate eggs, most countries don't. But it never failed to weird me out to open the cabinet and find a dozen eggs next to the cereal.

The UK definitely surprised me, and I'm not alone. Here are some of the funniest things people from other countries discovered when they traveled to the UK for the first time.

The UK and the US have a lot in common.

We both speak English, we both fought in the Revolutionary War (on different sides, though), and we both have royalty. (They have the Queen, we have Beyoncé).

But for all our similarities and our famous allyship, the truth is ever since we split in 1783, our countries have made a lot of changes.

And we really aren't as similar as you might think.

But what exactly were foreigners most surprised by when they visited the UK?

And of course, it's not just people from the US who were surprised.

The UK is a surprising country for people all over the world!

The US is big! The UK is actually very small.

Not so much shocked, but compared to the US everything is within walking distance in the central UK or at least where I went. everything seemed closer at least. -Epps1502

The rumor that the UK has terrible food is definitely popular in the US.

I had grown up being told the UK has horrible food, and it probably was true 20-30 years ago.

Oh my god, it’s paradise if you’re a foodie now. It’s high quality with insane variety. Edinburgh and Glasgow blew me away.

It depends on what part of the US you are from, but generally, people from the US are friendly (and really loud, sorry, other countries).

People don't talk to strangers. Admittedly, I'm from the South and we will talk to anyone who stands still long enough, but even asking for directions or greeting the staff at the hotel got me looks.  -theCheshireCatisMad

The same sodas taste different in the UK.

You guys use a different sort of sugar for your sodas than we do. Dr. Pepper in the UK tastes more like what we call Dublin Dr. Pepper (After the Dublin bottling company) Without the corn syrup, it has a pleasant...plum-like taste.

I forgot about these! I think it's because British people don't really use sour cream? Can anyone confirm?

You pay for gas....after you take the gas?

Wife and I were driving from Bath to York. We stopped at a petrol station to fill up and I went inside to prepay, like I would at any gas station here in the US. I spent 15 very confusing minutes going back and forth with the station attendants because they couldn't find a charge on the pump for me to pay.

It finally became clear that they had no idea what I was talking about because they don't require you to prepay over there - it was apparently unheard of. People actually fill up their tank, then go inside and pay like civilized humans.

Driving in the UK is definitely different.

How fast they drive on shit roads with zero visibility - i.e. stone walls or hedges on either side. -AusCan531

And have one of the lowest road death rates in the world. Against all odds we are mostly excellent drivers, probably because the driving test is pretty difficult to pass. -ElegantCustard

The UK loves to drink, but responsibly.

In America, we drink until we get wasted cause it's "fun". Not a lot of bars (or pubs) around every corner (although we do have liquor stores).

Came over the pond and saw pubs....pubs everywhere. So many drunk people at night that I wondered how could they even navigate the tube and all.

The next morning? Everyone seems fine and ready to work. I usually take the day off to nurse my hangover.

The UK is more environmentally conscious than the US.

I was in London a few months ago. First time I was in the UK.

Hotel Key, powers your room. I almost called up the front desk saying there was no power.

If you think gas is expensive in the US, trying living in the UK.

I knew gas would be expensive, but 1.35/l was a real shocker: gas in the UK costs about 3x what I pay in Texas! I rented a Vauxhall Mokka, and that thing felt like a tank on those narrow Scottish roads. After a couple of days, I saw that owning a small car in the UK was just good sense.  -Jason Stacy

That English wit can be biting.

How people could sound polite but be so rude at the same time. -Fubbik

Whenever I find a bar that has black currant juice in the US, I always order it! It's very rare!

Having a bar on campus definitely blew my mind. You could drink before class and not have to hide a bottle of vodka deep in your dorm closet? Amazing!

Beer, liquor, booze for people under 21. It blew my mind, I was under 21 at the time and it felt wrong to drink it so out in the open at a school event. Also a pub on campus, how cool. -altergeeko

Drinks are served without ice, and if you ask for ice, you get one or two cubes. -MattDU

This sounds kind of a magical, actually.

Urban foxes!! Was out having a smoke at about 2am outside my hotel in London and up trots this fox like 'hey dude, no big deal'. I could get used to seeing those instead of opossums. -sp00kyd00m

It all makes sense, now.

The fact that the tube is a literal tube. Thought it was just another crazy British slang term. -bbq_pork_buns

Things do not stay open late.

Shops close at 6pm. This one legit killed me, as a person who loves shopping and takes her time at it, I was amazed when by 6pm, all the shops were closed.  -gk261019

This always felt very personal to me! Americans like to be vague about what we are doing in there.

It's not "Bathroom", it's "Toilets": saying 'toilets' sounds extremely rude to me, but I got a few weird looks when I said the former. -Cuchullion

What I would consider a standard cup of coffee (drip coffee sweetened by creamer and sugar) was very hard to find in the UK: the one time I asked for one the person seemed very put out and didn't understand what I wanted. I learned to order cappuccinos. -Cuchullion

But of course, people who aren't from the US are also often surprised by the things they encounter when they come here for the first time.

We really do use red Solo cups.

I'm from Australia, and all my life I believed red Solo cups were like 555 area codes - a Hollywood prop. When I immigrated to the US, my MIL was making dinner and offered me iced tea in a red Solo cup.

I lost it, made everyone sign the cup. I've still got it.

That your country is huge!

I got off the plane and asked the cap guy how far the hotel was and he said about 30 miles. I almost had a heart attack... turns out cabs are cheaper than the Uk

I can't remember the price I paid but I was presently surprised.

Also you would get laughed of the taxi for asking to go 30 miles and not taking the train.

When you think about it, it is a little weird.

I spent a little time working at a summer camp, its really creepy seeing kids pledge an allegiance to a flag. Its quite strange. -anonymous

Most countries can't advertise drugs on TV, but not us!

What surprised me the most were the ridiculously long and worrisome disclaimers that are hastily read after dubious (e.g. pharmaceutical) commercials. I thought those were exaggerated by comedies like The Simpsons and Family Guy, but no, they are exactly like that. Sometimes even worse. They're beyond parody. -literal